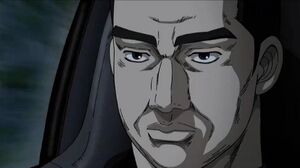 Ryuji Ikeda is one of characters from Initial D and Leader of Team Spiral Zero. He drives a red Nissan Fairlady Z Version S (Z33), also known as the 350Z.

He was voiced by Kazuya Nakai.

Ikeda believes in a theory he created known as "Zero Theory" in which car and driver come together to become a single entity. To do so, a great deal of tuning has to be done to a car in order to match the characteristics of the driver to attain a higher level of racing. Ikeda is an older racer and is very calm and level headed even in the heat of a race. He prepares for races by zoning out. When asked by Junichi Sakamoto, the number 2 driver of Team Spiral, what he thinks about when zoning out, Ikeda replies with "I don't think about anything. It's how I empty my mind and focus."

Shortly before Team Spiral's race with Project D, Ikeda is challenged to an unofficial race by Shinigami. Ikeda is pushed to his limits and bows out of the race in an attempt to prevent any damage to his car before the race with Project D. During the race with Project D, he remains in a confident position until he reaches a section of the track where it had been fogged over. This makes Ikeda hesitate, which goes against his zero theory. Keisuke, with assistance from Kenta, passes Ikeda at the start of a higher speed section near the end.