Ryuji Sakamoto, also known as Skull, is one of the main characters and party members in the video game Persona 5. He is a second-year student at Shujin Academy, where he is seen as a delinquent due to his bleached hair and aggressive nature, and one of the founding members of the Phantom Thieves of Hearts. Formerly, he was the star of the track team, before he got his leg broken by Suguru Kamoshida after he was provoked into hitting him, which resulted in the team getting disbanded. His initial Persona is Captain Kidd and his Ultimate Persona is Seiten Taisei.

He is voiced by Mamoru Miyano(who plays Riku from Kingdom Hearts) in the Japanese version of the game/anime, and by Max Mittelman in the English versions.

Ryuji sports the highest Endurance and the second-highest Strength (behind Yusuke), and Ryuji can also learn Charge to make his physical attacks even stronger. In addition, he learns abilities to increase attack power for one/all party member(s), and his unique Secret Art in Royal is Soul Injection, which causes a Charge effect on the entire party. However, Ryuji has the worst Agility and worst Magic among the Phantom Thieves, making him both the slowest to act and the least likely to dodge an incoming attack. He's also got the second-smallest SP pool among the Thieves, so he won't be casting much magic anyway.

Ryuji is known as a disruptive "problem student" at school whose bad behaviour causes all sorts of trouble for the teachers. He is quite proud of his status as a self-proclaimed "troublemaker" and his rebellious, mischievous and disobedient nature are the perfect qualities to be a Phantom Thief.

Despite this negative trait, however, Ryuji is an overwhelmingly forgiving and understanding person beneath his delinquent facade. In both his Confidant link and the main story, Ryuji is often the first person to step in and mediate when his friends begin quarreling, and is quick to support them when things go bad. This is especially prominent after Makoto's brief kidnapping — while the others are still somewhat bitter about her earlier treatment of them (and the fact she got them in trouble with the mob boss they were targeting), he immediately puts it in the past and comforts her. When they go to catch up to her and save her but all the taxis are ignoring them, he jumps into traffic to get one to stop. 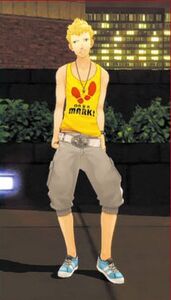 Ryuji in his summer outfit 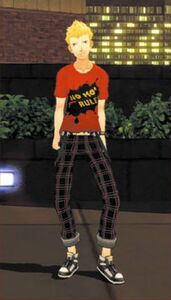 Ryuji in his summer uniform 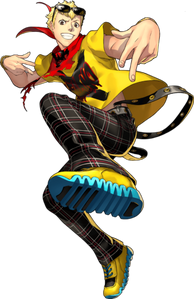 Ryuji after awakening to his Persona 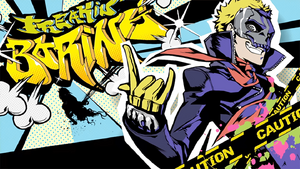 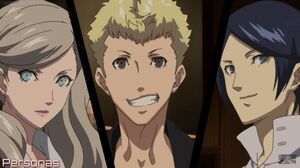 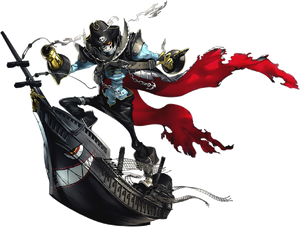 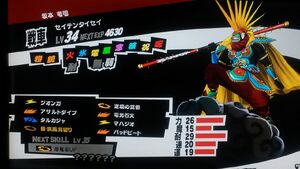 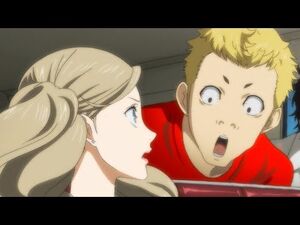 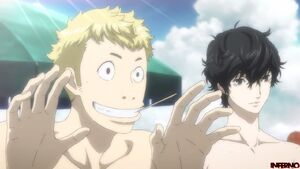 Ryuji perving on Ann again but to her humor

Ryuji and Ren giving each other a high five. 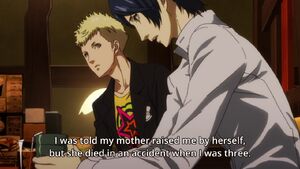