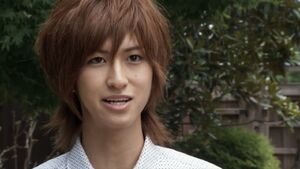 Ryunosuke Ikenami is SkinkenBlue of the Shinkengers. He is the love interest of Mako Shirashi. He is played by Hiroki Aiba.

Ryunosuke takes his role as the vassal or protector of Takeru very seriously and hero-worships Takeru. He is very disciplined and has a rigorous routine. When calling out Takeru on an action, he punished himself for disrespecting Takeru by being shirtless under a cold stream water of a fountain. He was given his Ryu Orgami by his father. He often clashes with Chiaki Tani, when he disobeys Takeru or Hikoma.

Ryunosuke and Takeru are most matched in fighting, except Ryunosuke depends more on technique. Takeru trusts him the most, he was the one he assigned into getting the Kaijiki Origami, because he knew he would not falter in getting it, no matter the situation as was the case. Ryunosuke was turned against his lord by a spell in Episode 9 and Takeru cut him, taking the spell away, knowing to take a risk. In Episode 14, he accepted a foreigner Richard Brown to teach him the ways of the Samurai even though he was bumbling. He had hope for him, but he was told to dismiss him, which he did but Richard misunderstood and went into battle. His valor encouraged the Shinkenger and they trusted him with their secrets. When Genta Umemori arrived, Ryunosuke called a "wannabe" samurai and did not accept him as a true Samurai, thinking he was just playing. Genta made him realize he was serious in protecting people from the Gedoshu. He can borrow the Inromaru to become Super Shinken Blue, he does for the first time in Episode 26. As Ryunosuke pledged his life to the head of the Shiba family, he becomes confused when Kaoru reveals herself as the real Shiba Head, not knowing who to follow. But after some advice clearing his mind, he goes to Takeru saying that he has pledged his life to Takeru Shiba and only Takeru Shiba and he will fight under him until the end. After the final battle, Ryunosuke goes back to work as a kabuki actor giving Takeru a kabuki-style farewell dance.

Retrieved from "https://hero.fandom.com/wiki/Ryunosuke_Ikenami?oldid=1787997"
Community content is available under CC-BY-SA unless otherwise noted.