Start a Wiki
Ryūjō (Japanese: 龍驤 "prancing dragon") was a light aircraft carrier built for the Imperial Japanese Navy (IJN) during the early 1930s. Small and lightly built in an attempt to exploit a loophole in the Washington Naval Treaty of 1922, she proved to be top-heavy and only marginally stable and was back in the shipyard for modifications to address those issues within a year of completion. With her stability improved, Ryūjō returned to service and was employed in operations during the Second Sino-Japanese War. During World War II, she provided air support for operations in the Philippines, Malaya, and the Dutch East Indies, where her aircraft participated in the Second Battle of the Java Sea. During the Indian Ocean raid in April 1942, the carrier attacked British merchant shipping with both her guns and her aircraft. Ryūjō next participated in the Battle of the Aleutian Islands in June. She was sunk by American carrier aircraft at the Battle of the Eastern Solomons on 24 August 1942.

Ryuujou shares many characteristics with the Hiyou-class such as being a shikigami-using onmyouji, wielding a flight deck scroll and some clothing choices.

Ryuujou wears a maroon/dark red kariginu-like coat over a white shirt, a black skirt and a magatama.

She has dark brown hair in twintails and she wears a visor cap resembling a ship's bow. Overall, she also looks smaller and younger than all of the other carriers, having a visibly flat chest.

She talks in Kansai-ben; often nicknamed "RJ" and, with her cap, resembles somewhat like a McDonald's worker. Near-constant victim of breast envy. 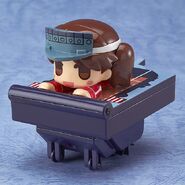 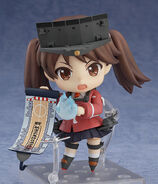 Add a photo to this gallery
Retrieved from "https://hero.fandom.com/wiki/Ryuujou?oldid=1584742"
Community content is available under CC-BY-SA unless otherwise noted.