Moving around its location
Hanging out with its caretaker

Live a happy life with its caretaker (currently)

SCP-011, also known as "Sentient Civil War Memorial Statue", is a Safe-class anomaly currently left uncontained by the SCP Foundation. SCP-011 is a statue build as a memorial for the soldiers of the civil war, but later gained sentience of its own.

According to SCP-011, it was originally a man named Chester Smith who was born in Woodstock, Vermont but eventually went to Kentucky in order to escape the civil war to no avail. He joined as a private in April of 1864 and began training with several harsh officers for months in the barracks only for him to be first of his regiment to die during the start of a battle.

When a statue depicting Chester was created in Woodstock as a memorial for the fallen soldiers who had participated during the civil war he went on to possess it, making the statue into his new body. In March 12th of 1995 residents witnessed it moving its eyes, in September 30th of 1995 the statue used its functioning musket for the first time and in December 9th of the same year it began using the musket to shoot at the birds which attempted to land or defecate on it. In January 25th of 1996 the SCP Foundation became aware of the anomalous statue and designated it as SCP-011. The Foundation decided to leave SCP-011 at its current location and have two personnel clean it and the area around it 30 minutes after sundown, but when the statue was unable to be cleaned for more than two days then the local residents were prohibited from viewing the statue. In April 14th of 1997 SCP-011 began to also casually move and look around its location.

In May 3rd of 2000, when its caretaker ████ ████████ jokingly congratulated SCP-011 after using its musket the statue for the first time spoke and thanked her. In October 22th of 2001 SCP-011 began having conversations with its caretaker and in the same year it stopped shooting at birds. In February 6th of 2002, after the caretaker implored SCP-011 to step down from its pedestal it complied and in the span of the following two years it reached human level of self-awareness. Seeing that the caretaker was doing a good job at taking care of SCP-011 the Foundation decided to drop the containment procedures in November 10th of 2004 and transferred the statue to her custody, while also keeping a constant observation on it. In May 17th of 2005 SCP-011 became romantically attracted to its caretaker and in March 12th of 2007 the two got married, but their marriage was not officially recognized.

On May 25th of the same year the caretaker retired from the Foundation and began living happily together with SCP-011, until in December 31st of 2010 in which the caretaker fell ill and soon died leaving SCP-011 alone and with a broken heart. One day SCP-011 was visited by Foundation employee Stanley J. Gillespie who wanted to interview it. SCP-011 explained to him its origin as Chester Smith, but when Gillespie began insisting to talk about its life with its caretaker it shot him in his eye, forcing Gillespie to understandably leave. Around February 29th of 2011 SCP-011 was observed becoming less mobile and intelligent and often went to the caretaker’s grave in a cemetery. In March 12th of the same year while resting at the caretaker’s gravesite it lost all of its anomalous properties and became a normal statue once again, and was then taken to Site-19. After the entire site was abandoned due to the Pulse neutralizing all anomalies, two young kids began exploring it and eventually came across the normal statue that was SCP-011 before proceeding to leave the site.

SCP-011 was a statue resembling fallen soldier Chester Smith holding his musket and carved out of granite quarried.

Despite being a statue SCP-011 was able to function and behave exactly like a normal human without receiving any structural damage or requiring any needs. SCP-011 was able to use its musket like it was real despite filling it with granite ammunition and powder which didn’t cause any serious damage to the receiver. When tested with a psych test SCP-011 scored an IQ of 133.

SCP-011's personality as Chester Smith prior to his death is unknown apart that after he got killed in the war he became bitter over this but not mad due to the enemy who shot dying himself shortly after. Following his death SCP-011 felt himself as his soul left his buried body which was decaying, which he described the process as uncomfortable and confusing until he woke possessing the statue depicting him after some birds began bothering him. Seeing the world around it had changed it decided to ignore all of that and focus on the bothersome birds which would land and defecate on it, causing it some distress. SCP-011 would also shoot at people who were being too much disrespectful to it by bothering it or touching sore subjects. When it began living with Foundation caretaker ████ ████████ it developed romantic feelings towards her and were soon married but after she died of an illness SCP-011 became seemingly depressed as it visited her grave from time to time until the rest of its life. 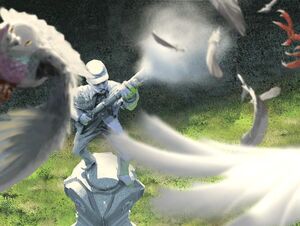 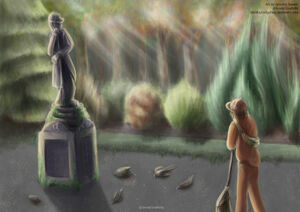 SCP-011 with its caretaker. 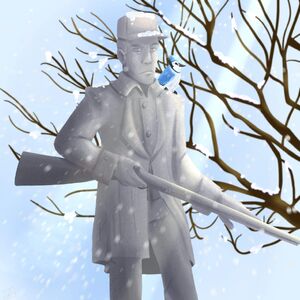 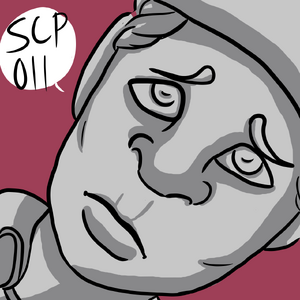 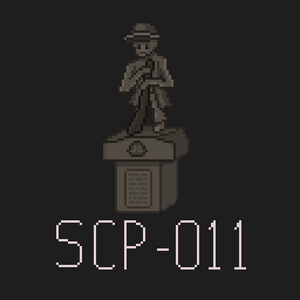