Able to travel from surface-to-surface of paper. and canvases

Interacting with drawings made by drawers.

SCP-085, known under the aliases "Hand-drawn Cassy", "Cassandra", or just "Cassy" for short, is a Safe-class, humanoid SCP contained within the SCP Foundation.

SCP-085 is a hand-drawn woman created by a drawing using SCP-067, which was then put through SCP-914 under the "Fine" setting, and was animated shortly afterward. She measures 15 centimeters (approx. 6 inches) in height and 3.8 centimeters (approx. 1.5 inches) in width and has long hair tied into a ponytail and wears a summer dress.

SCP-085 can interact with almost any drawing made on the surface she is present on, among these include wearing drawn clothes, driving sketched vehicles, and even drinking beverages. Any object is drawn by a subject (except for animals and people) will animate when SCP-085 interacts with it, but cease this activity when no longer in direct contact with her.

SCP-085 is also capable of traveling between paper and canvas surfaces as long as the two are connected directly, but can not do so with photographs, cardboard, glass, or parchment. When she travels onto artwork of different art styles (such as comic books, oil paintings, watercolor, or charcoal sketchingss), she will change appearance to match said art style. If she travels onto surfaces that do not support drawn objects (such as patterns or wallpapers), she will perceive it like endless space.

SCP-085 has been described as being very friendly and interactive with subjects who preform experiments with her, but also lonely. She is well-aware that she is a two-dimensional object interacting in a three-dimensional world, and has found an interest in it (at one point even unintentionally causing a containment breach).

SCP-085 is typically mute under normal circumstances, but Foundation personnel has found that sign language and writing on paper are effective means of communicating with her. When in a comic book, SCP-085 can communicate more directly as speech bubbles will manifest whenever she talks.

She has shown to desire to be human and work on cars. 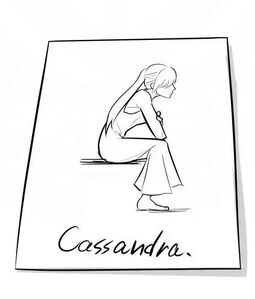 SCP-085/Cassy as she appears in Oversimplified SCP. 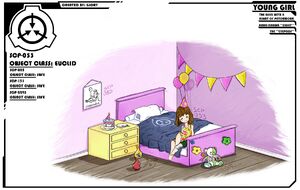 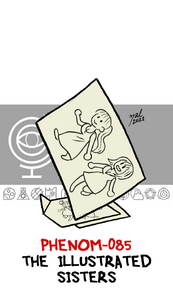 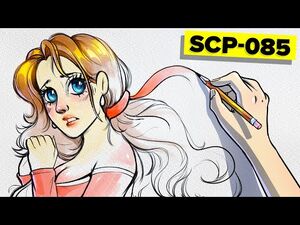