Participating in experiments for the SCP Foundation

To make its "owners" happy with it.

SCP-1005, known by the alias "The Painted Man" is a Safe-class, humanoid SCP contained within Site-17 of the SCP Foundation.

SCP-1005 is a sapient humanoid entity whose entire body is composed of semi-solid, blue paint and stands roughly 1.9 meters (approx. 6 feet, 3 inches) tall. Although SCP-1005 appears male, it does not have a true gender for its personal identity.

Although SCP-1005 appears to be wearing clothes, these apparent articles are actually part of its body, as though it is part of its skin. The only areas where it act as they are separate from SCP-1005's body are the ends of the sleeves and bottom hem of the shirt, the bottom of the pants close to the ankles, and a pair of shoes that were recovered with SCP-1005 upon its containment.

SCP-1005 has limited control over its property, being able to smear its blue paint on surfaces it comes in contact with, but when over hydrated, it loses control of this property.

SCP-1005 is described as being very polite and professional, however SCP-1005 seems to show little emotion beyond satisfaction and comfort, and is only able to show little facial expressions comparable to those essential for speaking.

SCP-1005 lacks an understanding of abstract and complex concepts, topics, and abilities which will leave it confused when confronted with such situations, however SCP-1005 is able to perform simple and essential tasks such as counting and speaking.

According to SCP-1005, its only real desire is to make its owners (in this case, the Foundation's researchers) "happy with it", and as such is willing to cooperate with the Foundation in any experiments they wish to perform on it. 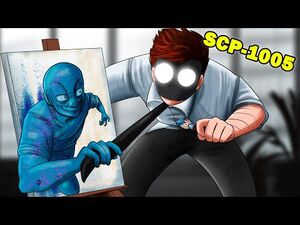