Keeper and Overseer of SCP-1230

Creating Fantasy-like within the dreams of those who use SCP-1230.

To make people happy and allow his users to have the greatest dream ever, but not grow too attached. (succeeded thus far)

SCP-1230-1, known as the "Book Keeper", is the name given for a wizard-like entity located within SCP-1230, a Safe-class SCP contained within the SCP Foundation.

SCP-1230-1 described himself as the "personification" of SCP-1230 itself. He appears in all user's dreams in the form of an elderly man with a long, white beard and wearing a green wizard's robe.

He was responsible for creating the fantasy-scapes within the dreams of those who wish to use SCP-1230, allowing them to have their own adventures as a form of subconscious entertainment. These universes within the dreams were described as lasting anywhere from a mere 45 seconds to as long as 200 years, even though Foundation personnel describe the users as only being asleep for normal periods of time.

SCP-1230-1 was described as being very friendly, helpful, and creative towards those who use SCP-1230. He enjoyed creating such universes within anyone's dream as a way to keep them entertained and happy.

If a person grew too attached with their fantasy (such as favor it over real life), SCP-1230-1 started to show concern, and would warn them that these universes were merely illusions meant to make them happy and that eventually they would have to return to the real world.

In one such case, a staff member named Professor B████ grew too attached with the fantasy world within their dream that they committed suicide upon returning to the real world. This left SCP-1230-1 heartbroken, realizing that the world he created to bring joy to many individuals was responsible for the death of perhaps its most adventurous user.

During this time, SCP-1230's pages began to read "I'm so sorry, I never intended for this to happen. I just wanted to make people happy." instead of its usual "A Hero is Born." message. Another staff member named Dr. F███████ decided to visit him within one of his dreams, and learned that Professor B████ had conquered many evil beasts, rescued princesses and even began to raise an in-dream family that he ultimately decided that he preferred the dream life over real life, despite warnings from SCP-1230-1.

Shortly after the unfortunate death, Dr. F███████ slipped a note inside SCP-1230, and soon afterwards SCP-1230 returned to displayed its usual "A Hero is Born." message on its pages prior to the incident. When staff confronted Dr. F███████ about what the note said, he simply state that it was just some "friendly advice". 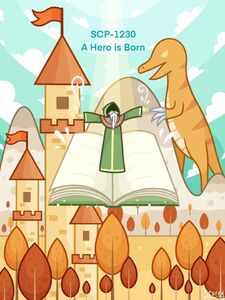 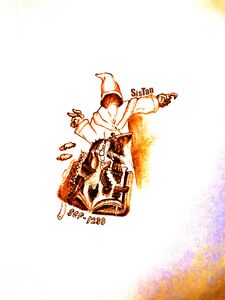 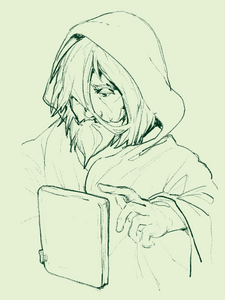 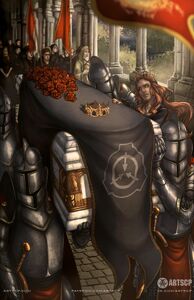 SCP-1230-1 in the background of Professor B████'s funeral. 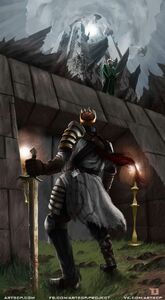 SCP-1230-1 creating an adventure inside a reader's dream. 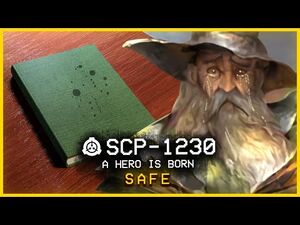 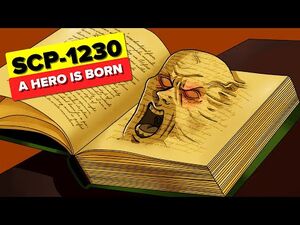