Express its feeling through writing with crayons

SCP-1252, also known as A Half-Formed Idea, is a Euclid-class anomalous humanoid currently under the custody of the SCP Foundation. It was originally created as an imaginary friend by a little girl named Suzie but midway during its creation she died leaving SCP-1252 only half completed and in need of a life support system.

SCP-1252 started out as the imaginary best friend of Susan May Fox, a little girl with reality bending powers who loved butterflies, dragonflies and flowers and whose parent separated leaving Suzie to go live with her mother in an apartment. However, while Suzie was midway in creating SCP-1252 with her imagination and reality manipulation, she got involved into an accident which ended in her death. The sudden stop of the thoughts caused SCP-1252 to be left unfinished, leaving it missing half of its body which included some vital organs. Thankfully the SCP Foundation was notified of its existence and sent it to a site where it was plugged to a life support system.

While contained by the Foundation Dr. Blake interviewed SCP-1252 and asked it about its origins to which SCP-1252 explained that it was created by Suzie and asked the doctor to find her and bring her back to it so it could be properly finished. However, after the Foundation found out that Suzie was sadly dead they decided to lie to SCP-1252 by telling it that Suzie was recovering from the accident in a local children's hospital. SCP-1252 seemed to be convinced by this and during its time it has made some small requests such as access to pain medication, various candies, getting outside, one copy of Beatrix Potter The Complete Tales and instruments to write its expressions, with first three requests being denied due to its poor health while the latter two approved. On October of the year in which it was recovered SCP-1252 knew of a letter that would come to the site for it. The Foundation received the letter but denied giving it to SCP-1252 due to possible anomaly, but thankfully on Christmas the sender only known as Kind Man breached inside the containment chamber of SCP-1252 to deliver the letter which was a drawing made by Suzie depicting her and SCP-1252 in its finished state and he assured to SCP-1252 that Suzie still remembered it.

In a future where the world was slowly being destroyed, the site that still contained SCP-1252 was still standing despite the chaos but was losing a considerable amount of energy. In order preserve some more energy Dr. Blake approached SCP-1252 and told it that he needed to shut down its life support system. SCP-1252 understood and allowed the doctor to take its life but requested to be killed with a gun. However, Dr. Blake for some reason didn’t use the gun on SCP-1252 and instead he simply let it die after turning the life support off.

SCP-1252 has the appearance of a genderless humanoid weighting 43kg and standing 1.78m. Because its creation was interrupted midway SCP-1252 currently lacks almost half of its body such as its lower legs, right arm, parts of its organs and most of the left side of its face. SCP-1252's body is mostly comprised of compressed insect wing material, with 23% percent of its skin being made out of the wings of swallowtail butterfly and skimmer/percher dragonfly's families, while in its left eye socket a Blue Glorybower or Blue Butterfly Bush replaced the eye.

Because SCP-1252 lacks half of its body it was put on a life support system in order to keep living. Despite the damage it possesses over its body SCP-1252 was still able to speak, albeit with some effort as it was not able to breathe well and coughed from time to time due to its damaged lungs. SCP-1252's body was mostly comprised of insect wings which retained their structural integrity only when attached to the body and if some part of it is removed they will crumble into insect wing scales. Despite not being able to generate its entire body when some of its parts are removed SCP-1252 was able to regenerate the lost body parts.

SCP-1252 is shown to really love its creator Suzie, wanting to know about her whereabouts and wellbeing and expressing a strong desire to be reunited with her, although this could be because it was supposed to be Suzie’s best friend. After falling under Foundation custody it became very compliant with them due to personnel lying to it about Suzie telling it that Suzie was fine and recovering somewhere else. Although it believes that the Foundation personnel are telling the truth it became somewhat depressed as time went on due to the absence of Suzie. 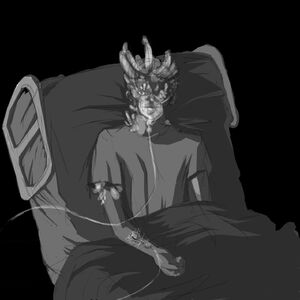 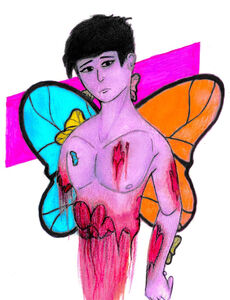 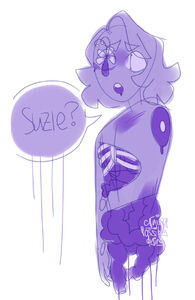