Deliver its message to any surviving species in the universe. (succeeded)

Church of the Second Hytoth (possibly)

SCP-1281, also known as The Harbinger, is a Safe-class SCP uncontained by the SCP Foundation. It was biomechanical creature created by a dying alien race with the intent of delivering a message of hope to anyone who would find it.

SCP-1281 was one of the many biomechanical devices created by a mysterious race of aliens who were going extinct due to the universe slowly dying. Although they could do nothing to prevent this, the aliens decided to give hope to the other lifeforms existing in space by sending a message via the devices which would travel for countless through space in order to deliver the message to anyone present. SCP-1281 ended up spending at least 1.3 billion years travelling through space, mostly in a dormant state, but eventually it suffered a destructive accident that resulted in parts of its body being damaged. Because of this it was left stranded in the Kuiper belt of the Sol system where it became once again dormant.

While the SCP Foundation was executing the containment of SCP-2362, they discovered SCP-1281 floating nearby, at which point it began receiving radio waves from Earth. When Foundation assets tried to approach it, SCP-1281 sensed them and after breaking the Foundation decryption it began broadcasting binary signals in order to communicate, starting with simple mathematical concepts. However, after a report was sent back to Earth, SCP-1281 stopped broadcasting for several, while the temperature within its bulge began rising to five Kelvin most likely due to information processing. When it began broadcasting again, Dr. Bloom of the Foundation tried to interview it, but as soon as it started SCP-1281 shut down for four hours, while the temperature rose up to 60 Kelvin. Fearful of the nature of SCP-1281 the O5 Council began preparing in the case SCP-1281 became hostile and advised Dr. Bloom to be cautious when resuming the interview. When SCP-1281 began communicating again it asked about its current location to which Dr. Bloom answered that it had arrived in the solar system and informed that he and his species were humans. Upon acknowledging that it came into contact with a foreign alien race SCP-1281 tried to deliver its message, but it shut down again, while temperature rose to 70 Kelvin which caused further damage to its structure. This somewhat assured the O5 Council that SCP-1281 wasn’t hostile and decided to be honest with their conversation in hopes of not complicating its containment. After seven hours SCP-1281 activated, but because of its damaged memory it briefly mistook humanity for its creators and after being reinformed that it was communicating with humanity it once again shut down for ten hours while the temperature reached 85 Kelvin, but upon activating it was finally able to send its message about remaining optimist even despite the universe's destruction before it. Afterwards, SCP-1281 went inactive for fifteen min before Dr. Bloom began communicating it once again. As its time was coming to an end it asked the doctor if the message was good and if it did a good job to which they responded by saying that the message was of great importance and that it did a great job. This deeply pleased SCP-1281 and soon shut down for good which allowed Foundation operatives to bring it to Outpost 120-09 for study where it began to decay, while Dr. Bloom was reprimanded for breaking protocol.

SCP-1281 was described being roughly teardrop-shaped, with a flattened bottom. It measured 12 m from end to end, was 11 m in circumference at its widest point, and at the opposite there was a significant bulge which probably served as storage for the majority of SCP-1281's analysis equipment. On the surface SCP-1281 possessed several dish-shaped structures which most likely served as receivers for electromagnetic radiation, lozenge-shaped capsules whose purpose was unknown and there were several broken parts which suggested that SCP-1281 previously possessed more appendages prior to its accident.

Being a biomechanical creature designed for space travel, SCP-1281 was able to navigate through space for countless years. It possessed several dish-shaped structures which served as receivers for electromagnetic radiation which allowed it to communicate, and a highly advanced computer system which was capable of translating any language it came into contact in a matter of minutes. It also possessed a cooling mechanism to lower the temperature of its system but was broken following the accident which would lead to SCP-1281's system overheating and causing its death.

SCP-1281 appeared to be simple minded being despite being a highly advanced device. It didn't know the meaning of the message it was carrying, but as per its programing it was determined to deliver it to any lifeform it came across. It also appeared that it longed to return home, but kept travelling through space to fulfill its objective even though it caused it to become heavily damaged as result. As it had come into contact with the human race SCP-1281 finally delivered its message about of hope and with its purpose completed it became satisfied before peacefully dying. 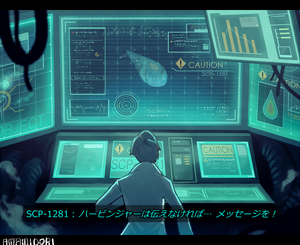 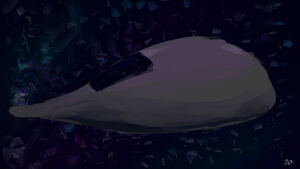 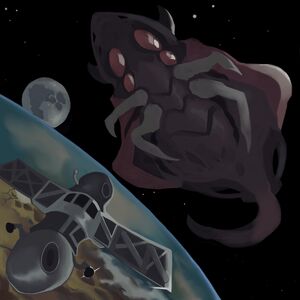 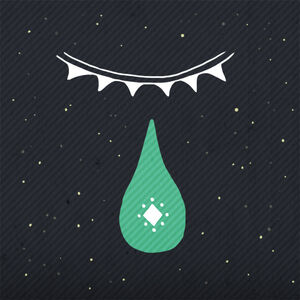 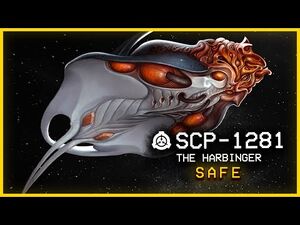