SCP-1342-3, also known as the Gliscian, are an extraterrestrial race inhabiting the planet of Gliese 445-C in the SCP Foundation Mythos. After coming into contact with Voyager 1 in the distant future they were able to learn from its messages, coming to learn about humanity and seeing them as beautiful and superior creatures. Even when humanity itself began destroying them due to fear, the Gliscian still loved humanity and hoped to send a copy of the Voyager to the past in order to convince humanity that they could coexist peacefully.

The Gliscian were an alien and somewhat primitive race that lived on planet Gliese 445-C that resembled Earth. After 40,000 years after being launched the space probe known as Voyager 1 came into contact with the Gliscian who began studying it messages. From the Voyager they learned about humanity and their culture. They became enamored with humanity and their nature and achievements, and seeing the beauty in the human race the Gliscian sought to emulate themselves after the humans. They created structures and technologies based on the information contained within the Voyager and soon tried to communicate with humanity on Earth. After finally coming into contact with humanity the Gliscian experienced a scientific revolution which led to their world becoming a near-utopia where they began experiencing a better and more peaceful life until becoming equal to the humans themselves, and even achieved space and time manipulation.

However, in the year 42,412 AD when humanity saw that the Gliscian became their equal they feared that the aliens may surpass them and so decided to commit mass genocide against them. As the Gliscian were being slaughtered by humanity their culture also completely collapsed while their planet was destroyed by the humans' advanced weaponry which resulted in it being unable to support life anymore. The remaining 300,000 seeing that their entire race would inevitably die sought to use their time-travelling technology to destroy humanity in the past, so that they could survive despite their own development becoming stymied. Thankfully, as the Gliscian were about to kill humanity in the past they were reminded of the first time they had come into contact with Voyager 1 and learned about the beauty of humanity. They were unwilling to kill this race as they deemed it beautiful and so they instead decided to send a copy of the Voyager 1 which contained the history of their own race and culture along with the message that explained their end, hoping that this message would convince humanity to spare them in the future. The probe was successfully sent on September 25th of 1982 before crash landing into east of Baker Island, Pacific Ocean. There the SCP Foundation personnel recovered it and designated it as SCP-1342-1 and the golden record containing the information as SCP-1342-2. After learning about the Glascian, who were designated SCP-1342-3, the Foundation decided to keep the message secret and had Project Heimdall to form its Contingency Planning Operation regarding the Glascian, while observing their planet for suspicious activity.

The Gliscian are radially symmetric organisms which possess three legs and three elongated arms, with each hand possessing three fingers, all positioned around a central axis on a roughly cylindrical torso. Instead of head the Gliscian possess three snout-like protrusions, each ending in a beak, and when fully grown they stand around 2m tall.

Not much is known about their culture, but given that they tried to emulate themselves after humanity their manner of living and working are very similar to that of humans. Just like humans they engaged in agriculture, manufacturing, and even playing music on an instrument similar to violin, while living in urban crowds. 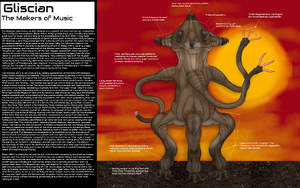 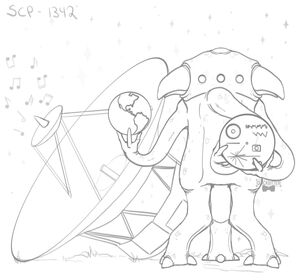 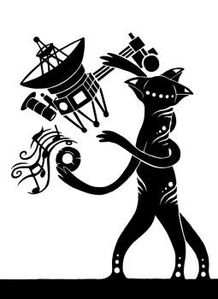 The Gliscian sending SCP-1342 to the past. 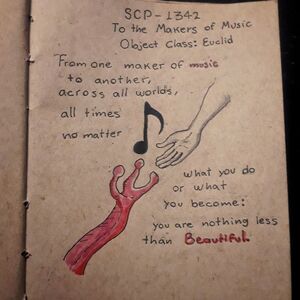 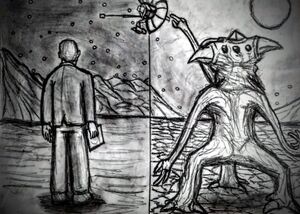 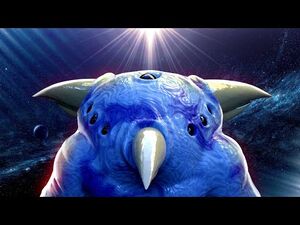