Hanging with Salix and Josephine.

Live a happy and peaceful life with Salix and Josephine (succeeded for a time, failed later)

Loyal Animal
SCP-1530-3, also known as Willow, is an Euclid-class entity contained by the SCP Foundation. She was originally a demiurge that left Eden to serve Josephine, a powerful reality bender. She is part of both the "Pitch Haven" and the "Green King" canons.

Willow used to be a Demiurge that lived in the garden of Eden, SCP-2746-1, and was chosen alongside her close friend Salix to be a part of the prestigious Scholar class in that world, as well as one of the few righteous citizens of Eden, although that was because she wasn't even there during the war. Shortly before Event Nachash, she and Salix left Eden by using an anomalous artifact and their paw prints so that their master, a strong reality warper named Josephine, could be their masters. However, Josephine ended up using her reality warping skills to change some of the rules that she and Salix needed to function, such as being able to survive despite missing vital organs. Josephine, instead of using the pair to serve her, just chose to be their friend, and for a while Josephine, Willow, and Salix lived as a family.

Unfortunately, the peace would not last as a D-class personnel designated D-2934 that the Foundation used for testing with SCP-249 ended up there, and killed Josephine. Willow and Salix both attacked the D-class to avenge their master, and ended up sustaining several injuries in the process. Injury wise, Willow ended up with one of her eyes gouged out and several cuts on her back, and got off much lighter than Salix. This whole time, the fight was a time loop that lasted for years, until it stopped, and the Foundation agents were able to retrieve Willow, Salix, and the D-class. Currently, Willow is contained in Site-45, in a room separate from Salix, and given bedding but otherwise left alone.

Willow is a very quiet entity, as no Foundation personnel have ever heard her speak or communicate to them, and normally prefers minding her own business. She is quite docile to Foundation personnel, although she might sometimes have an outburst towards them. Despite being quiet, Willow is very loyal to her friends, and is very devoted towards Salix, following and helping him around. She is also revealed to be friends with Ananias, one of the Furies of Eden, and views her master, Josephine, as her family, and was quick to avenge Josephine after D-2934 killed her.

SCP-1530-3 is currently contained in a humanoid containment chamber somewhere in Site-43 with bedding, although any requests from her may be submitted to the Head Researcher for consideration. The Foundation uses tranquilizers on her when she's distressed, but otherwise leaves her alone. Despite SCP-1530-3 herself being mostly harmless and not associated with the Furies of Eden, a dangerous group of interest that poses a huge threat to the Foundation, the Foundation is still somewhat cautious around her due to her involvement with Josephine as interviews with her have to be approved by two level-3 personnel and conducted by D-classes only.

SCP-1530-3 takes the form of a black and brown beagle (Canis Lupis Familiaris,) but medical examinations of her have shown that she lacks a liver and lungs. She also has an injury on one of her eyes that blinds her, as well as some lacerations on her back that do not seem to heal. Despite this, it does not seem to affect her living ability due to Josephine's intervention. 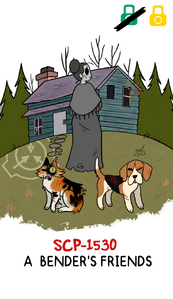 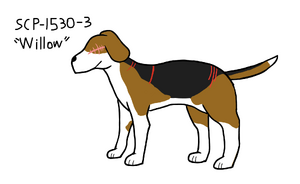