Reveal the pure feelings of its creator (ongoing)

SCP-1690, also known as Sentimental Sushi Man, is a Euclid-class humanoid object currently under the custody of the SCP Foundation. It was a sentient humanoid made out of various sushi remnants. It only goal is to mimic its creator in his arts and impress its lover, a statue of a noblewoman made out wasabi designated SCP-1690-1.

SCP-1690 first started out as an amalgamation of the spirits of discarded and uneaten sushi rolls from the restaurant owned his creators. It was created by a man who was talented in arts of food during the time he was trying to impress a noblewoman from a family which was acquainted with his. After its master was successful in his attempts the two were soon married and because of this SCP-1690 created a statue depicting the noblewoman and began producing food from its body in order to also impress her. After the marriage the family moved away from the fishing village where the now abandoned restaurant resided while leaving SCP-1690 behind with its statue.

After sometime, the villagers took notice of SCP-1690 which led to the SCP Foundation being involved. Upon the arrival of the Foundation agents SCP-1690 complied with their requests and surrendered itself, leaving the agents to take both it and its statue to the nearby site while administering amnestics to the witnesses. SCP-1690 informed Foundation about its origins and the reason of its behavior, and had been very compliant with personnel who had given it the Euclid classification and are instructed to behave respectfully when interacting with it. To this day SCP-1690 remains in a Foundation humanoid chamber with its Wasabi statue, offering it food and writing poems.

SCP-1690 has the appearance of a humanoid composed entirely of cooked vinegared rice, dried seaweed, and pieces of various raw fish with no easily discernible facial features.

SCP-1690 is a sentient humanoid made out of sushi and capable of acting just like an ordinary human despite lacking features which would allow it to possess senses such as hearing, smelling or sight and the ability to talk. The food which comprises it never rots unless parts of it are removed and when removed it would be replaced the regeneration. If SCP-1690-1 is taken away from it then after sometime SCP-1690 will start to crumble until it is reunited with the statue which would restore SCP-1690 to its original humanoid form.

SCP-1690 behaves in a formal, disciplined manner, as it often sits cross-legged and motionless in its cell, facing its wasabi sculpture and from time to time will craft various sushi items, such as nigiri with the topping cut in the shape of sakura petals, and salmon sashimi arranged in the shape of the kanji, by using parts from its body. Always after finishing preparing the food, SCP-1690 would present the finished to SCP-1690-1, and seemingly interpret the sculpture's lack of response as rejection which causes SCP-1690 to emit distressed vocalizations and consume the sushi. SCP-1690 is also able to speak fluent Japanese as well as English with a strong Japanese accent, and while speaking, it will insist on addressing all individuals with Japanese honorifics of respect. SCP-1690’s only purpose is to impress its lover SCP-1690-1 in the similar manner that its creator did with his lover and has occasionally made requests for sheets of rice paper which it would use to compose poetry, generally haiku or senryu, using soy sauce as an artistic medium. If personnel are disrespectful to it and refuse its offered food or SCP-1690-1 is removed from it SCP-1690 would go to a state of shock and distress which causes it to remain motionless and shed layers of its body, and will only cease until the statue is returned and left alone for a period of time. Despite showing human emotions the Foundation is unsure to what extent SCP-1690's empathic understanding is. 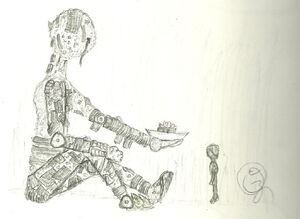 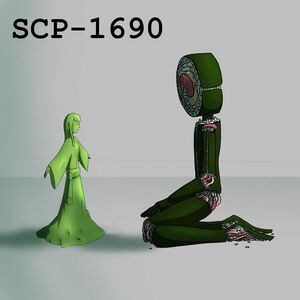 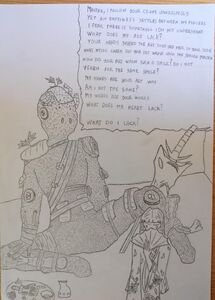