Survive his time as a D-Class (possibly, succeeded)

SCP-181, also known as Lucky, is a Safe-class anomalous human contained by the SCP Foundation. He was originally a D-Class personnel after receiving a life sentence before his anomalous nature of luck was soon discovered by the Foundation and properly contained in a more secured manner.

SCP-181 was an American man named G████ O██████ who unbeknownst to him possessed the power to manipulate the probability to always favor him. He took part in the Nevada Gaming Commission where he was able to always win every game thanks to his anomaly. However, this caused him to be framed for fraud and was given a life sentence for this. Presumably following the 18th month of his incarceration he was approached by the SCP Foundation and offered him a chance of freedom if he decided to work for them as a disposable personnel for some months. He seemingly accepted and was moved to Armed Reliquary Containment Area-02 where he was given the designation of D-87465.

In his first test he and fellow D-Class D-65468 were to be exposed to an unknown SCP, but when D-65468 got first exposed he rampaged across the testing area killed every single personnel present except for D-87465 due to an armed response team arriving just in time and putting D-65468 down. Following a week after the incident D-87465 was then tested with SCP-075, a hostile snail-like creature that released a highly corrosive substance, but to everyone's surprise he managed to avoid his encounter with the creature for three times unscathed. Because of this the Foundation began suspecting of some anomaly affecting D-87465 and so he was next tested with SCP-082, an affably ogre-like immortal man who occasionally ate people which also includes his friends. D-87465 yet again survived his encounter with SCP-082 for four weeks which prompted Dr. G███ D██ to properly investigate this case. After the doctor tested D-87465 with various objects such as flipping a coin, rolling a pair of dice, and randomly pulling several cards from a deck of playing cards, he had D-87465 roll another unknown SCP. D-87465 was able to roll 19 green circles and recreate 4 classical masterpieces of varying art forms but as was about to roll the SCP on the red triangle a tremor was caused by SCP-216 which caused the SCP to fall on a green circle again. This confirmed the doctor’s hypothesis that D-87465 had the ability to uncontrollably manipulate the probability around him in his favor and he was redesignated as SCP-181 which allowed him to avoid the monthly termination of class D personnel.

However, Dr. ███████ soon discovered in a recent audit that during the time of SCP-181's confinement the death and injury of Foundation personnel has exponentially increased and because of this it was theorized that SCP-181's anomaly could be a great threat to the world. In light of this SCP-181 was transferred to Site 27-█ and placed in solitary confinement while personnel in the site were prohibited to interact with him and were ordered to take maximum precautions when operating within the site.

The true appearance of SCP-5935 is never revealed and there are no details about it.

SCP-181 is capable of manipulating the probability around to always benefit; however, he has control over this power. Thanks to this power every outcome revolving around SCP-181 always results in the most favorable for him. He was able to win every game in the Nevada Gaming Commission, survive his encounters with extremely dangerous entities and objects, nearly flipping 50 heads on a coin, rolling 25 7 scores on a pair of dice, pulling all 13 heart cards out of a playing cards deck, and rolling 20 green circles on an unknown SCP. Apparently this ability only benefits SCP-181 as it began greatly increasing the number of deaths of near Foundation personnel and it was theorized that it could pose a great threat to the entire world. Because of this, SCP-181 was moved in solitary confinement, since efforts to remove as much chance from an event as possible reduced SCP-181's effect on the event.

Not much is known about SCP-181's personality but it is shown that he very compliant with Foundation personnel and it was stated that he had a good behavior. 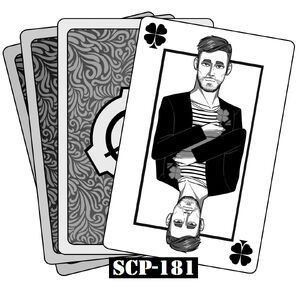 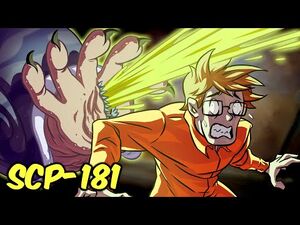