Communicate with his son (failed)

SCP-2053-1, also known as "Paternal Rubik's Cube", is a sentient Safe-class object under the complete custody of the SCP Foundation. The object was previously a human father who transformed himself into a Rubik's Cube in order to finally communicate with his disabled son.

Not much is known about the person who later became SCP-2053-1. What is known is that he was a father who dearly loved his son Jacob, whom he called him Jake. However, following a unknown accident involving Jake and his mother, Jake suffered a condition as a result of this accident and became unwilling to talk to anyone, instead only wanting to play with puzzles. This greatly saddened the father who desperately wanted to talk to his loving son again, but was unable to do so. Eventually he met a mysterious individual who told him that he knew a doctor from Virginia who could help him to talk to Jake again. However, upon meeting this doctor instead of fixing Jake, he instead transformed the father into Rubik's Cube and then created a computer file named "i_love_you_jake_please_read_this.pdf" filled with every possible combination with each combination corresponding to a sentence. This allowed the father to use this type of communication to finally talk to Jake.

Unfortunately, after Jake had become 31 years old the father and the document fell under the custody of the SCP Foundation which designated him as SCP-2053-1 and the document as SCP-2053-2. Using one of their programs on SCP-2053-2 Dr. Boone was able to communicate with SCP-2053-1, but after seeing that 2053-1 mistook him for Jake the doctor ended the interview, since the cube would find out that he wasn't Jake and requested a search on Jake. After finding Jake in an extended care facility, Dr. Boone tried to interview the father again and this time he revealed his true nature which caused 2053-1 to agitate thinking that they had done something to his son. Boone assured him that Jake was safe and tried to question him about his origin, but 2053-1 was unwilling to elaborate further and repeatedly asked to talk to his son which was denied by the Foundation. Because of this SCP-2053-1 refused to talk to them further, until he finally talked to his son. As of now he along a USB drive containing SCP-2053-2 are locked within a locker in an unknown site, and once a month personnel try to communicate with him, but due to his noncompliance these attempts have mostly result in failure.

It is unknown how the father looked like prior to being transformed into a puzzle cube. After his transformation he resembled a normal Rubik's Cube with colored stickers measuring approximately 5.7cm along each exterior edge, and shows signs of wear and tear most likely due to use, but the stickers have never been removed.

SCP-2053-1 has the ability to rotate parts of his "body" in order to communicate with other people. SCP-2053-2 also contains exactly 43252003274489856000 pages filled with every combination each corresponding with a English sentence, and far surpasses the number that should be possible of a file of a size of 1.21 MB.

SCP-2053-1 is shown to deeply love his son Jake, and became deeply depressed when Jake became unwilling to talk to him. He loved his son so much that he sacrificed his human body and transform himself into a puzzle cube in order to communicate with Jake again. When he came into contact with the Foundation he feared that they had done something to him, and refused to talk to them, until he finally spoke to his son again. 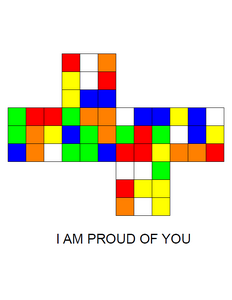 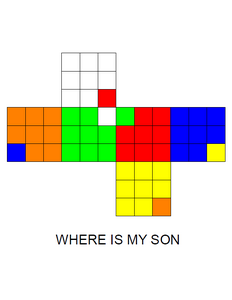 Another phrase of a combination from SCP-2053-2. 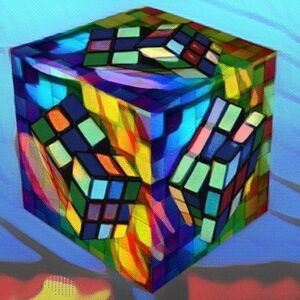