SCP-208, known by the alias "Bes", is a Safe-class, beast-like SCP that resides within Site-17 of the SCP Foundation.

SCP-208 is a strange, stout man of short stature of Egyptian origin. Much of its body, especially around its facial area is covered in thick, coarse hair that resembles a lion's mane. Because of it's heritage, SCP-208 usually dresses in traditional Egyptian garments matching those resembling those worn during the era of the old kingdom, but will also wear more modern military fatigues occasionally as well.

SCP-208's main property involves inducing rapid cellular regeneration of organic tissue, which is essentially a form a healing caused by electromagnetic radiation that is released from SCP-208's body. This radiation is notably harmless compared to similar forms of radioactivity, but studies based on MRI scans on D-class personnel show that this radiation stimulates the patients' nervous system by fending off malign pathogens and other harmful anatomical entities in one's body.

Despite his beastly appearance, SCP-208 is notably friendly among Foundation personnel and frequently enjoys company and socializing; because of this, SCP-208 is allowed clearance to many of Site-17's areas, including the medical wing where he occassionally assists staff in. 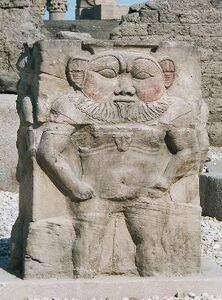 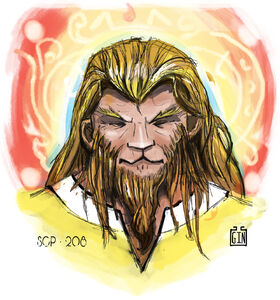 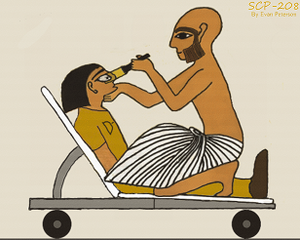