Euclid Class SCP of the Foundation

Playing around with his powers

Helping peoples
Playing as a hero

SCP-2241, also known as Cameron The Crusader, is a young boy who is capable of using multiple abilities (reality-bending, telekinesis, matter transmutation, self-duplication, teleportation.) And is confirmed to develop out more abilities in the future.

Not much is known about SCP-2241's appearance, but it's known that he is a seven-year-old, brown-haired male human.

SCP-2241 was considered a good candidate for long-term/intensive research into telekinesis and reality bending specifically, and anomalous humanoids generally. A theory made by the researchers is that the anomalous humanoids of this type develop stronger or additional anomalous abilities as they age, with the possibility of developing into full scale reality benders increased by emotional stress. As such, it is considered essential to long-term containment and research that SCP-2241 believes he is working with the Foundation. SCP-2241 has demonstrated to have an apparent superhuman strength, which it was stated that with one missile launch from his hand was already powerful enough to break the barrier of sounds. He also seems to have the ability to disable the senses of both organic and inorganic life-forms, which was proven when he corrupted the motion senses of the Foundation personnel.

Cameron's main weakness is that his powers and abilities have yet to reach their full potential, as he is currently still a young boy. His powers were noted to be tied to his condition, strength, and age.

Cameron is a boy who is considered to be kind-hearted and always attempts to do the right thing. The boy is one of the types that act before thinking. Cameron would never sit around upon seeing someone in a pinch and will go to great lengths to protect or help the person. This was demonstrated as he helped a lady getting back her purse.

However, Cameron has a bad-side of his, and this side is being a spoiled brat, when Cameron doesn't get anything he wants, he would display an extremely childish, and short-temper manner.

Although, it is also implied that Cameron suffers from mental breakdown when he realizes that an innocent life is about to die, as it is possibly because of still being a kid he cannot handle seeing things that are gory.

This is shown as the entry has said that he became angry from seeing that the researcher who finds what they are looking for is transmute by him into a timebomb and almost killed the both of them, he almost lost it when he thoughted the researcher is going to die. Although, with all these troubles going through it also allows Cameron to develop and learn the newfound powers he discovers to neutralize the threat he is being recognized with.

However, his lack of understanding about the world causes him to be one of the few SCPs that can easily be manipulated by others. Despite being able to know what action is terrible and what action is good, Cameron is still a kid, and he isn't educated really well, which causes him to not know how to judge a person to see whether if their good or not before cooperating with them, thanks to this, the SCP-Foundation can easily use him for a lot of purposes. This was demonstrated in the SCP-5000 entry. The Foundation ordered Cameron to cause a whole campsite to convict murder to one another, and he just so happens to do so with no hesitations, at which point the Foundation later on abandoned him.

SCP-2241 was first discovered by the Foundation when the young boy was in the middle of saving a woman from being robbed, which he stated is what superheroes like him should do. He decided to work for the Foundation under the impression that they are like the Avengers. Thanks to the Foundation, SCP-2241 was able to unlock more abilities, albeit suffering to their experimentation.

After all of the adults around the world completely disappeared without a trace, leaving all children, including SCP-2241, all alone, SCP-2241 not knowing what to do proceeded to transform Site-34 into a mansion resembling Westchester Mansion. Assuming that the Foundation personnel had vanished into SCP-3001, began practicing his powers inside the mansion, causing the environment to undergo a pataphysical distortion which made it seem like a comic book story. Eventually SCP-2241 was approached by the new Administrator Cole Thereven and Rich House who sought to find a way to return the adults. The duo attempted to convince him to help them but SCP-2241 remembered the painful procedures done to him by the Foundation and became reluctant in working with them. Thankfully, later on he agreed to work alongside them and help the Foundation to protect the children that were left around the world and find a way to return the adults.

SCP-2241 briefly appears in the graphic novel adaptation of SCP-5000, created by artist Beangrant and published by Discordia Publishing. 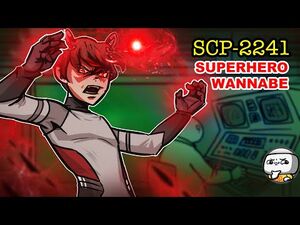 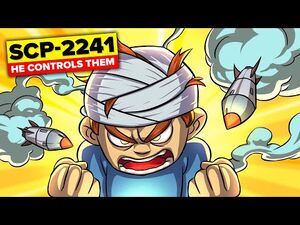