Transforming any dog into instances of SCP-2420-1 (formerly)

Playing and hanging out with Mattie/SCP-2420-1 (formerly)

Be reunited with Mattie (succeeded at first, abandoned later)
Stay in the Foundation's custody (ongoing)

SCP-2420, real name John █████, is a Neutralized humanoid anomaly currently under the custody of the SCP Foundation. He was a normal man who owned a dog named Mattie, but after her death he gained the anomalous property of transforming any dog which became aware of each other into his deceased dog.

SCP-2420 was originally a normal man named John whose parents had died which led to him moving in his parents' house. Feeling extremely lonely in his new house John decided to adopt a puppy from his neighbor who was giving away his dog’s puppies. Upon arriving there he immediately noticed a conceited female Border Terrier puppy playing and fighting with her siblings. After seeing each puppy John felt a deep connection with the puppy and decided to adopt her and named her Matilda May, or Mattie for short. They soon formed a strong bond between them, with John considering Mattie as his family and the two would happily interact with each other in the ensuing years. However, one day when walking outside, a teenage girl accidentally ran over Mattie while John was busy jaywalking. Seeing Mattie’s middle of the body being squashed and bleeding John began to cry and picked up Mattie’s carcass and proceeded to take it home. There John used his father's shovel to dig a hole in his backyard and before burying Mattie he wrapped her broken body with her favorite green blanket. Being unable to cope with the loss of his beloved dog and believing that he should been hit by the car instead he soon noticed that every dog he came across transformed into Mattie. This caused further distress in John, who decided to commit suicide by throwing himself from a bridge, but changed his mind and went to the park where he used to hang out with Mattie only for all present dogs becoming possessed by Mattie resulting in the poor man fainting and was subsequently taken by the SCP Foundation.

Under the custody of the SCP Foundation John was designated SCP-2420 and taken to Site-213 where Dr. Hydock began overseeing his case. In order to help him with his depression he was given Bupropion, Citalopram and Alprazolam and was allowed to transform a dog into Mattie and interact with her twice a week for three hours each time. After ten years passed under the custody of the Foundation, SCP-2420 noticed that Mattie was aging with time despite the anomaly and one day while interacting with her SCP-2420 was able to see from her unusual behavior that Mattie was now leaving for real this time and after that reverted back to a confused Golden Retriever. Following this, SCP-2420 was deemed Neutralized, but he refused to be let free and forget his time while under custody, since he would most likely commit suicide for real. This led to the Ethics Committee to start a discussion to keep him under permanent custody, and while that was going on SCP-2420 was given Level-0 clearance.

The true appearance of SCP-2420 is never revealed and there are no details about it.

Following the death of his dog, SCP-2420 gained the property to transform any domesticated dog into a perfect replica of Mattie designated SCP-2420-1 and have their memories replaced with Mattie's. SCP-2420 had no control over this property as whenever he became aware of a nearby dog or the dog became aware of him, the dog would transform into Mattie with no problem, and when it was taken away from him the dog would revert back to its original state. Each instance of SCP-2420-1 was also immortal as nothing could kill them while transformed, but video recordings and photos taken of each instance of SCP-2420-1 always showed the original dog prior to its transformation. Eventually as Mattie became more and more tired of doing this she decided to properly rest and resulting in SCP-2420 completely losing his property.

SCP-2420 was a kind man who didn't like to be lonely. When he first met Mattie he felt instantly connected to her and soon formed a deep strong bond between each other. He deeply loved Mattie and even considered a member of his family. After her gruesome death, SCP-2420 became deeply depressed over the loss, but did not blame the girl who had ran over her since he understood that it was an accident. When his anomalous property first manifested he further fell into depression to the point of deciding to commit suicide before being detained by the Foundation. While in their custody he was administered several antidepressants and was allowed to interact with an instance of SCP-2420-1 in order to help him with his depression. SCP-2420 also showed concern about the dogs which were transformed into Mattie, fearing that this experience caused them pain and that the Foundation would dissect the poor dogs. After SCP-2420 lost his property he finally came to term with Mattie’s death, but refused to be administered amnestics and forget this experience since he would most likely try end his life again. 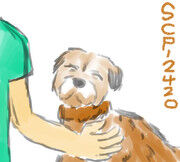 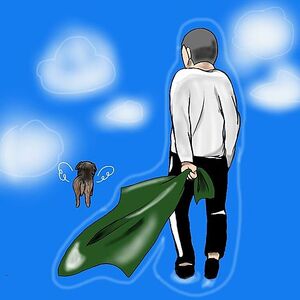 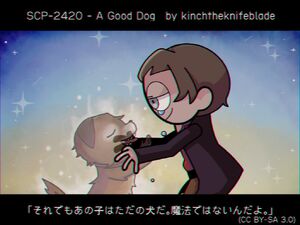 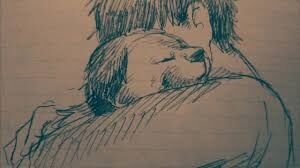