Ambassador from the Mole People

Ambassador of the Terra Interia Empire

Reading A Princess of Mars, Marvel Masterworks: The X-Men, Hyperborea, Journey to the Center of the Earth, The Island of Doctor Moreau
Writing his memoirs

Return to his motherland (ongoing)

SCP-2622, also known as the Ambassador of the Mole People, is a Safe-class humanoid entity currently contained by the SCP Foundation. He is a mole-like creature who claims to be the ambassador to humankind from the Terra Interia Empire, a mysterious underground ancient empire formed by some sapient underground species with no evidence of its existence.

SCP-2622's real origin is unknown, but according to him he was born into the species known as the Interians which was part of the ancient underground civilization known as the Terra Interia Empire. The Terra Interia Empire was a massive empire made out tunnels which span to the majority of Earth’s crust and was inhabited by several animals, plants, and sapient species such the Interians, the Rock-Men and the reptile-like Anapsidons. Several places that were part of the empire were: Krystopolis, the capital city of the empire located beneath Earth's North Pole with buildings constructed from a green organic crystal that grows into directed shapes; The Fire Plain, a cavern located beneath the south-central Pacific Ocean, with constant volcanic activity that prevented plant life growth, but despite this it was inhabited by silicon-based crystalline animals, and the Rock Men; The Great Underland Sea, a underground sea located beneath the center of Africa and populated by prehistoric sea life from the Devonian to the Cretaceous time periods, and a mysterious fish-like sapient species; The Savage Country, an immense cavern underneath the island of Greenland in the Arctic Ocean, with a tropical climate and inhabited by dinosaurs; The Ice Forest, a frozen cavern located underneath Korea, with its ice crystals being the size of a city; and the Thorn Wastes which previously used to be under Korea before being moved by the tectonic shifts.

Hundred of thousands of years in the past, SCP-2622 became an ambassador-at-large from the civilization to humankind as the two were engaged in frequent diplomatic relations. During the Great Interior War in which the Interians fought against the troublesome Anapsidons, SCP-2622 took part in the Eighth Battle of the Ice Forest in which he slew several Anapsidons. Following the victory of the Interians over the Anapsidons, SCP-2622 was awarded with several medals, while the Anapsidons decided to get revenge on the civilization. Eventually the Anapsidons came back and presumably caused the great disaster that caused all knowledge regarding the Terra Interia Empire to be lost and humanity forgetting about them. While that happened SCP-2622 was in Terra Exteria on a diplomatic excursion in an attempt to negotiate the first inter-layer trade routes and so was not present in the event. It is unknown what SCP-2622 did after being cut from his civilization, but presumably began roaming Earth in an attempt to return until the modern age.

Around 2013 he entered the maintenance areas of the London Underground and began living and wandering around but eventually began suffering from malnutrition and dehydration, until SCP Foundation personnel became aware of his existence and put him under their custody and administering medical help. After recovering he became excited to finally interact with humans and began telling personnel his adventures. He was then shortly put inside a humanoid chamber furnished with necessary furniture which lead SCP-2622 to believe that he was in an hotel. He became cooperative with staff and made several interviews detailing the history and nature of the Terra Interia Empire before requesting them to help him return to his home, but staff was unable to find any evidence about the existence of the civilization. Currently SCP-2622 is kept inside his dark chamber where he began writing his memoirs about his adventures he experienced after the disaster occurred.

SCP-2622 appears as a humanoid mole, standing approximately 1.80m tall, weighing approximately 85kg, and appeared to be middle-aged due graying hair and early-onset rheumatoid arthritis in his hands. His eyes were approximately 15cm in diameter and instead of eyelids his eyes were protected by transparent nictitating membranes. His nose was ringed with twenty-two fleshy appendages and occupied the entire front of his head. His hands were covered in in light grey scales and tipped with 5-centimeter-long claws. SCP-2622’s entire body was covered in dark grey-black fur with aging-induced pigmentation loss on the head, upper back, and shoulders. He often wore clothes provided by personnel which included khaki, aloha shirts, and men’s sun hats.

Because his lived underground for most of their existence SCP-2622 and his species have developed a mole-like body. Instead of eyelids his eyes were protected by transparent nictitating membranes and since he had lived underground he was extremely sensitive to light which would cause him ocular pain. Thanks to his sensitive nose with prehensile appendages, SCP-2622 was sensitive not only to touch, but also to radio frequencies, electrical currents, and vibrations within solid substances. He mostly used his special nose to smell and touch when examining objects. Because his hands were adapted to digging they were covered in scales that limited his sensation to touch and the fingers were limited in motion. Due to his metabolism he also needed to eat 25 parts protein paste to 75 parts soil in order to stay healthy.

SCP-2622 is friendly and cooperative towards Foundation personnel, acting like a noble gentleman and speaking fluent English with an English accent. He has proven himself to be very knowledgeable about his world. Despite lack of validity of his claims, SCP-2622 provided in-depth detail about the underground world where he originated from and his adventures, often times through stories he tells to Foundation staff. He also appeared somewhat ignorant and unfamiliar to present-day culture and technology of humanity, though he seemed to be adapting. 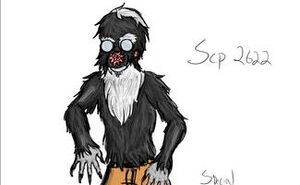 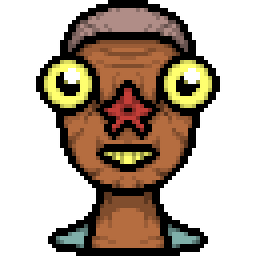