Convince her sister to free the children from SCP-3082 (ongoing)

SCP-3082-2, real name Aria Morrison, is 12 year old child in the universe of the SCP Foundation. She and her sister Jacquelyn were victims to abuse in their home which led to her sister creating the pocket dimension in which various abused children from the United States would be teleported and forever live in their makeshift village. SCP-3082-2 became the leader of the village before setting out to confront her sister and convince her let all of the children free from the dimension.

Aria Morrison was born on January 7th of 1984 in Ohio and lived with her younger sister Jacquelyn in an abusive household. One time when their parents were absent on Jackie's birthday Aria tried to cheer her up by telling her that there would be a surprise party in the park for her half-birthday with chocolate cake and a bouncy house. As time went on Aria forgot about her lie, but after six months passed she and Jackie went to the park and to her surprise they found an actual birthday party, since unbeknownst to her Jackie was actually a reality bender. When she and Jackie played in the woods Jackie would create pyramids, jungles and sandcastles and once even transformed herself into a mermaid, but Aria would always tell her to return things back to what they were after playtime was over. Eventually as the abuse in their house endured, on August 12th of 1996 when Aria was twelve years old and Jackie seven, the two sisters decided to ran away from home when they parents began fighting. They went to the woods but after half an hour they began feeling scared from continuing into the dark woods and from going back and at that moment Jackie used her powers to create a pocket dimension and transformed herself into a giant tree with a single tree house and placed Aria inside the house in order to protect her. At first Aria began crying as she didn't know what to do as she couldn’t survive in the tree and pretended to speak Jackie telling her a bedtime story about pitcher plants full of water when night came. In the morning Aria found that Jackie had manifested rope bridges which connected the cabin to a grove place and there were also multiple fruits for her to eat. As time went on Jackie began bringing other children who fell victim to abuse such as Rachel, Ahmed, and Lucy who became friends with Aria and figured out that more children would come so they began building a village in the grove and formed the "chief royal council" in which Aria was the leader.

As time went on Aria was able to see that this life was inadequate for them as the houses were in a poor state and when Ahmed broke his leg and no one was able to fix it leaving the poor boy with his permanent injury since none of the children grew older while trapped in the pocket dimension. Because of this Aria decided to descent down the tree in order to find a way to confront her sister and convince her to let them free. However, as she descended down the giant tree for five months Aria found herself trapped in a tree hollow in the oak section and remained there until she saw a flying drone exploring the tree. Upon noticing the drone Aria was left astonished at the sight of this technology and began frantically calling out to it in hope of talking to someone who could help her. However, the drone began retreating due to its battery decreasing which caused distress to Aria who proceeded to ask Jackie to bring the drone to her. The tree then struck the drone with a falling fruit damaging it and causing it to land inside the tree hollow where Aria used her duct tape and pocket knife to fix it. After the drone recharged itself and began operating Aria figured that there was someone using it to observe so she attempted to talk to the person behind it. When she was assured that the drone was indeed controlled by someone Aria was relieved and introduced herself before telling the person to rotate the drone’s propeller one time for no and two times for yes in order to have a conversation. After being informed that the organization behind the drone had discovered the village Aria wrote her version of Morse code on a nearby birch bark in order to have a proper conversation and through this she learned that the organization was named the SCP Foundation. The next day the SCP Foundation introduced themselves to Aria and explained to her how they discovered the village and their goals but were unable to further talk because she needed to move in order to find food. Nine days after the last interview Aria took the drone to the maple section of the giant tree at which point Aria began talking to the drone out of loneliness. The Foundation took the opportunity to ask Aria how she had gotten the drone and why she left the village to which Aria responded by explaining to them about her and her sister's lives under the abuse of their parents, Jackie's powers and how she Jackie had used her powers to create the pocket dimension, transforming herself into the giant tree and gathering various abused children. She further explained how she was hoping to go to the part of Jackie which still retained the memories prior to all of this and convince her to let the children free, but to no avail. It is unknown what happened to Aria afterwards.

SCP-3082-2 was a 12 year old girl of African-American descent. After being trapped inside the pocket dimension designated SCP-3082 Aria stopped growing and remained at an age of 12 and always wore a white T-shirt, short denim overalls, and white sneakers which she wore when first arriving to the pocket dimension.

SCP-3082-2 was a normal human girl with no powers or special abilities apart that she was quite smart and was seemingly quite good at craftsmanship. However, thanks to her sister listening to her she was able to order the tree to help her for various things and while inside the pocket dimension Aria was unable to age.

SCP-3082-2 was shown to be a kind and respectful girl who took care of her younger sister and her fellow children. She always tried to remain positive and cheer her sister up despite the abuse endured by their parents and was responsible enough to convince her sister to revert things to normal after she used her powers to changer reality. After she and other fellow abused children ended up inside SCP-3082 she gained their trust and helped them settle a village for them to live and became the leader of the group, bringing order to the village. Despite the freedom this independent life offered to them SCP-3082-2 was able to see that these conditions was too much for them and became determined to convince her sister to let them go in order to seek assistance of the adults. When she made contact with the SCP Foundation she became glad at finally talking to adults who worked on anomalies similar to the situation the children were in and hoped that they could help her convince her sister to free the children. 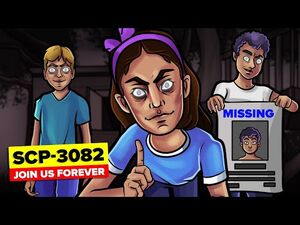