Kill every yōkai he encounters (formerly)

SCP-3507 was a semi-immortal Japanese warrior and son of Emperor Sanjō, who used his anomalous powers and skills to kill all of the yōkai haunting the land of Japan. Because of his unique powers of killing yōkai the SCP Foundation intentionally let SCP-3507 to freely roam the land in order to take care of the threat posed by the yōkai and was classified as Thaumiel before committing suicide after failing in his mission.

SCP-3507 was one of Emperor Sanjō's sons who would have succeeded his father as emperor of Japan. However, his father soon saw his son as unfit due to SCP-3507 showing cowardice when fighting against their clan's enemies and so the court planned to replace him with someone more competent. Eventually, the beings that would become known as the yōkai began manifesting around the land due to the negative emotions produced by the people and they began attacking the emperor and other citizen of Japan. The emperor was able to feel the yōkai thanks to his blindness and tried to find a way to get rid of these monsters and so he was forced to give his son to an Onmyōji guardian who would train the son to fight the yōkai plaguing the nation. As a result of his training SCP-3507 achieved a new state of being which allowed him to properly fight the yōkai. He began using the Ways to hang around disused Taoist religious shrines from different regions of Japan in order to hunt yōkai.

As years went on, in the 20th century SCP-3507 encountered the Imperial Japanese Anomalous Matters Examination Agency which was trying to contain the yōkai and used various other anomalies that they have acquired in order to use them for their own benefit. It appeared that the IJAMEA also tried to contain SCP-3507 but he fought back as he saw them as corrupted control freaks. After the IJAMEA was dissolved in 1945, the SCP Foundation became aware of SCP-3507 and seeing that he was doing a great job at terminating the yōkai they decided to let him freely roam and keep doing his job. After Dr. Tsunesaburo interviewed SCP-3507, assuring him that the Foundation were protectors just like him, the Foundation sent Mobile Task Force Rho-11 to assist 3507 by protecting civilians during battles. The Foundation would organize festivals centered around ancestor veneration in local towns in order for the people to not become suspicious of 3507 and they also sent some drones to track any movement of 3507.

When Japan began suffering from lack of resources due to the aftermath of World War II, a great number of yōkai manifested throughout Japan because of this. SCP-3507 arrived to the town of Shirakawa in the Gifu prefecture which was completely taken over by the Tengu. He tried to fight them off but the battle was so great that the collateral damage caused by the battle resulted in 17 civilian casualties. SCP-3507 became distraught by this and seeing that he had failed his role he committed suicide by disemboweling himself using his sword on the roof of Osaka Castle. His body was later found two days later by the Foundation who stored the body in deep storage warehouse #32-T in Site 46, while his weapon and armor were transported to the Site 36 non-anomalous storage department. MTF Rho-11 went on to terminate the yōkai by themselves using tier V trans-dimensional kinetoglyphs.

SCP-3507 was a Japanese man appearing to have been of 20-30 years of age. He wore a type of armor known as ō-yoroi which was made out of thousands of individual leather scales bound together through an intricate network of bamboo threads. The armor was also covered in a thick layer of tree resin and salt, and over it, SCP-3507 usually wore a wool coat. On his back he always carried a sheath which contained his sword known as a ōdachi.

SCP-3507 was a skilled swordsman primarily thanks to his father's training. His master who practiced Onmyōdō taught 3507 how to transcend his being by achieving inner peace and becoming one with his peaceful environment. This allowed SCP-3507 to become semi-incorporeal and gain powers which allowed him to kill the yōkai with his sword, and was able to walk through solid objects with no problem. Despite this he still had to walk like a normal human, but he was able to travel to different regions of Japan by utilizing the Ways, interdimensional roads often used by the Serpent's Hand.

At first SCP-3507 was somewhat of a coward because he didn’t like to fight battles and kill people, but instead opted for a more pacifist lifestyle. He had a complicated relationship with his father as they both respected and loved each other but they had resentment about their taken actions. Yet he felt comfortable around blind people since they reminded him of his father. After being trained by his master SCP-3507 became determined to rid his land from the threat of the yōkai whom he saw as his antithesis and dedicated his entire life to help the people of Japan by killing these monsters, although he still abided for a peaceful lifestyle with no fights. He was also a man of great honor as after failing to protect some people from the threat of some tengu he committed seppuku. 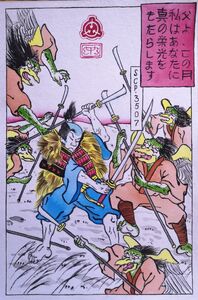 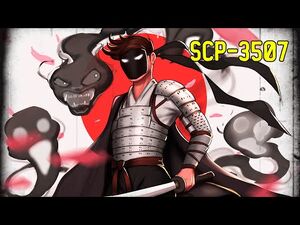 Father, This Day I Bring You True Glory - SCP-3507 Animation