Fragment of the Mither

SCP-3700-1 is one of two entities associated with events caused by SCP-3700, an area encompassing a 800 kilometer (approx. 497 mile) area surrounding the Scottish islands of Orkney, Shetland, and Faroe. It is a gargantuan crustacean that battles with its more malevolent counterpart SCP-3700-2 on a sporadic basis. Depending on the result of each battle, the weather patterns, biodiversity, and resources of the islands will be immediately impacted for a considerable amount of time. SCP-3700-1 plays a role in the "Orcadia" canon.

SCP-3700-1 was a gargantuan crustacean measuring 6 km. (approx. 3.72 miles) in length. It strongly resembled a European Lobster in physiology, but was green in pigmentation instead of blue and yellow. At the top of its body, there were several blue, yellow, pink, and red markings that form what appears to be a woman's face. The entity featured four orange compound eyes, each attached to stalks located on a crescent-shaped head.

Much of SCP-3700-1 exoskeleton (primarily around its carapace) was heavily damaged as a result of its battles against SCP-3700-2, with visible scars, cracks, and holes exposing softer, more vulnerable tissue.

In addition to its size, SCP-3700-1 had a number of anomalous properties.

Its two largest appendages were often used in a similar manner as a lobster or Peacock Mantis Shrimp, whereby it used them to attack SCP-3700-2, each strike (alongside the resulting cavitation bubbles) produced force in excess to several tonnes of dynamite. Two of its eyes were capable of emitting concentrated blasts of gamma radiation.

Outside of its body, SCP-3700-1 had various weather-related properties. It was capable of dispelling/dispersing various storms and other forms of weather in its vicinity, whilst also increasing the rate of erosion on landmasses within 100 meters (approx. 328 feet) of its location.

If SCP-3700-1 was unable to locate SCP-3700-2 within a 15 day period following its manifestation, it would demanifest until the next event occurred. The exception being the Vernal (Spring) and Autumnal (Fall) equinoxes, where it would only demanifest after it defeats or was defeated by SCP-3700-2.

Unlike its counterpart, SCP-3700-1 was benevolent, non-hostile, and at times philanthropic in nature, whilst displaying basic forms of sapience. When in the presence of Delta-7, it would either ignore them or assist them in the event Delta-7 was in peril (such as when SCP-3700-2 attacks them).

Upon manifestation, SCP-3700-1 would actively patrol the area comprising SCP-3700 in search of SCP-3700-2. It would travel in a spiral pattern starting at an area known as the origin, located roughly an equal distance between the three surrounding islands.

SCP-3700-1 was one of the Sea Mither's many fragments, which also included SCP-6700-4, created after she was imprisoned by SCP-3230, the Chainmaker. This fragment eventually came face to face with SCP-3700-2, which was the representation of the Mither's archenemy, the evil god Teran, and began fighting each other over the course of years.

SCP-3700-1 had been encountered by local fishermen in the area encompassing SCP-3700 since at least the 1500s, although local folklore suggested such sightings have occurred much earlier, while its evil counterpart SCP-3700-2 was not physically sighted until the mid-20th century.

In the event SCP-3700-1 encountered SCP-3700-2, the two entities would interact in the form of a prolonged and often times intense battle. These battles occurred at least twice annually in sporadic intervals ranging between two weeks and six months apart, but would always occur on the Vernal (Spring) and Autumnal (Fall) equinoxes. If SCP-3700-1 defeated, killed, or subdued SCP-3700-2 then: inclement weather (including storms) would immediately dispel or dissipate the the area; reproduction rates of oceanic fauna would increase by three times the normal rate, whilst crop yields in the area encompassing SCP-3700 would double; erosion rates on the archipelagos would increase by five times.

However, if SCP-3700-1 was instead defeated, killed, or subdued by SCP-3700-2 then: inclement weather patterns would intensify, resulting in storm conditions ranging from that of a category 1 to a category 5 hurricane. Temperatures would also rapidly fluctuate between 0 and 28 degrees Celsius (32 and 82.4 degrees Fahrenheit). Such conditions were strong enough to cause severe damage and destruction to structures on the islands, as well as considerable loss of life; travel by sea was rendered nearly impossible, requiring the use of aircraft or storm-faring vessels to achieve travel and transport of supplies to the area; ocean food sources and fauna would be driven from the area, whilst others expired due to poor weather conditions and disease. Likewise, crop yields would plummet due to strong winds, over saturation, and lack of sunlight; in addition, SCP-3700-2 would not demanifest and would actively patrol and prey upon civilian vessels, attacking them whenever they made the unfortunate mistake of encountering the entity.

If neither SCP-3700-1 or SCP-3700-2 encountered each other during such an event aside from the equinoxes, the weather would revert to that consistent with the climate of the islands.

Historically, the two entities would often times flip cycles in dominance over which one was victorious, with SCP-3700-1 generally being the dominant entity during the Spring and Summer months, and SCP-3700-2 often being dominant during the Autumn and Winter months. Since the SCP Foundation has semi-contained the area and initiated containment protocols however, SCP-3700-1 had become overly victorious over SCP-3700-2 thanks to Foundation aid, with an ongoing dominance cycle of 64 equinoxes as of the present.

Despite this however, Foundation personnel have noted that SCP-3700-1 had gradually grown weaker overtime, requiring enforcement of a military-esque exercise called "Protocol Winter Maelstrom" to be implemented in the event SCP-3700-1 encountered SCP-3700-2.

On March 20th of 2017, Naval Task Force Delta-7, also known as "Northern Storm", arrived at the sea before the appearance of the entities and prepared their combat vessels in order to assist SCP-3700-1. After SCP-3700-1 manifested it noticed the vessels which escorted it around the "origin" point for thirty minutes before the weather changed and SCP-3700-2 appeared. At that moment Delta-7 attempted to kill the evil entity, but were attacked by the SCP-3456 instances. SCP-3700-1 helped the NTF by killing the instances and saving the personnel who had fallen off one of the boats before engaging in direct confrontation with SCP-3700-2. However, despite the massive damage it succeeded to deliver to it, SCP-3700-2 was able to use its tail to impale SCP-3700-1, seemingly killing it. Thankfully, as SCP-3700-2 attempted to devour one of Delta-7's ships, SCP-3700-1 regained itself and stopped the monster from devouring the NTF members. SCP-3700-2 tried to fight back by biting SCP-3700-1 and rip its limbs but the latter used its remaining strength to tear the monster's jaw off, killing SCP-3700-2 shortly followed by SCP-3700-1 which also succumbed to its injuries. In the aftermath of this fight, the NTF received a signal from the Finnfolk's submersible vehicles that would later be designated SCP-4700. 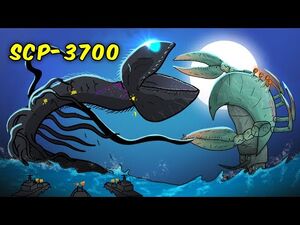