Spending time with his "family" and "friends".

Have adventures, protect his friends and family, and defeat his enemies (ongoing)

SCP-3740, also known as Ashur, is a Keter-class anomalous entity currently contained by the SCP Foundation. He is a strong deity who poses a considerable threat to the Veil of Secrecy, but thanks to his low intelligence can be easily fooled by the Foundation personnel into containment. He is directly based on the Assyrian god Ashur.

SCP-3740 was an ancient deity known as Ashur, the godhead of the Assyrian pantheon. He was well known back in the Mesopotamian times, but because of his reckless and dimwitted nature his fellow gods such as Suen the god of moon, Nergal the god of the sun, and even O5-2 (The Nazarene) needed to babysit him. At some point, SCP-3740 encountered and battled Adam el Asem, and won by slamming his genitals on Asem's face.

In the modern world, SCP-3740 still roamed the Earth. Eventually, he entered a bar near the Turkish city of Gaziantep and after becoming drunk began fighting the other patrons due to believing that someone had insulted him. Because he used his powers to win the fight the local authorities apprehended him which then led to the SCP Foundation getting custody of him. He was subsequently taken to Site-81 and after seeing that he could be easily fooled the personnel stationed at the site told SCP-3740 that he went back in time in the period in which he was still worshipped and that the site he currently contained was the "Angolian Château" which he had conquered while drunk. In order to use SCP-3740's ignorance to successfully contain him, several personnel posed as "Servants", "Château Guardians" and "Gods and Heroes" to keep up the façade. SCP-3740 failed to realize anything, straight up believing everything that the personnel said to him and began spending time with them while suspecting nothing. One day Suen arrived to pick him up, but after seeing that the Foundation were already taking care of him he decided to leave him under their custody for the time being.

While having a feast with his "friends", SCP-3293 breached containment within Site-81 and got hold of SCP-2398. Seeing that everyone became alarmed SCP-3740 wished to assist them in the danger that was occurring, leading to the personnel deciding to use him to recontain SCP-3293. While traversing the site's Wing I they came across SCP-3293 who was confused and frightened, and after learning that the young boy was powerful 3740 sought to battle him but thankfully was refrained from doing so by the researchers. The researchers attempted to negotiate with the poor boy, but after that failed as 3293 had become even more agitated, 3740 decided to directly confront the boy, deeming him a skilled fighter and as he approached him 3293 hit him with SCP-2398. However, the attack didn't result in an explosion as was typical with SCP-2398, but 3740 was simply left with a huge bleeding gash on his chest before he collapsed on the floor. While on the floor, 3740 saw the newly employed Julien Rattner convince 3293 through empathy to surrender himself, telling the boy that everything would be alright. In the aftermath of the Incident, 3740 fully recovered without any problem and wished for both 3293 and Julien Rattner to join his future feasts as he was left very impressed by them, with Dr. G. McElroy approving of the request.

SCP-3740 is a Class VIII humanoid reality-altering entity capable of manipulating air currents at will, communing with flying animals, and controll air pressure and temperature. With these powers he was able to produce gusts of wind in excess of 500 kph, create and control cyclones and other meteorological formations. SCP-3740 is also multilingual as he was capable of speaking fluently in English, Spanish, Portuguese, Arabic, Farsi, and Armenian, as well as several dead languages.

Due to SCP-3740's abilities and characteristics, he is currently classified as a Keter-class anomalous entity. However, the Foundation was able to easily contain him thanks to the fact that SCP-3740 is extremely gullible. SCP-3740 accepted almost all statements at face value, and displayed no traces of skepticism or uncertainty, believing almost anything said by any person, so long as he believed that the individual was a similarly powerful deity.

Actual supernatural feats were not required as evidence of their deific power as simple card tricks or sleight of hand were sufficient proof of godhood in the eyes of SCP-3740. SCP-3740 despite having an affinity for sparring, he was somewhat bad at fighting.

SCP-3740 is described as good to others as he has a very honorable sense to those who have great fighting spirits and those who represent for good. However, he is shown to be a person that treats peoples such as "slaves" and "servants" as those who don't catch his attention. Meaning that he has no interest in feeling sympathy for them. It mentioned that if anyone who takes the roles as "servants" and "slaves" dares to make eye-contact with him without his permission would mean that it is a sign of disrespect towards him. In other words, SCP-3740 has sometimes lack of kindness, and understand towards inferior life-forms and will only treat those peoples with kindness if they could make him feel interested. SCP-3740 has an affinity for a spar, meaning that he loves fighting to test his powers and level of strength on his "brothers" as the MTF. However, SCP-3740 is also described as an idiot. SCP-3740 despite being overpowered and acting as superior to all, he always believed the statements of everybody's words. This proves in the entry that the Foundation fooled SCP-3740 into believing that the whole facility is a place of Gods and Heroes. 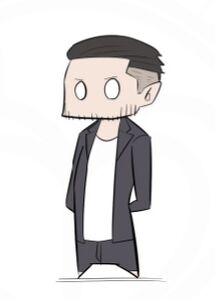 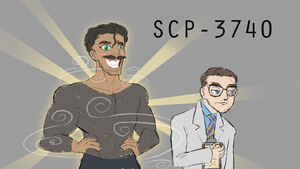 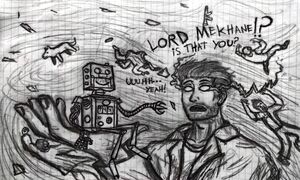