Building and expanding their environments.

SCP-387, known by the alias "Living Legos", is a Safe-class toy SCP contained within the SCP Foundation.

SCP-387 is a tub of Legos (though the designation expands to the Legos themselves), containing shapes found in normal commercially available sets and ones not found in standard sets (such as wheels and prisms). When the tub is not full (either partially filled or almost-emptied, but not completely emptied), it will slowly replicate Lego pieces until it is full once more.

Research conducted by the Foundation on the vehicles and other machines made from SCP-387 were found to function without any mechanical power source.

Lego men constructed by SCP-387 are shown to be cooperative with not only one another, but also with human beings, showing no hostile behavior towards them in any form, and interacting peacefully with them. However when any human begins to act hostile towards SCP-387, it will cease animation and become docile prior to interaction with human activity.

SCP-387 has shown hostility towards Mega Blocks, and will [DATA EXPUNGED].

SCP-387 was discovered in February 20██ by Agent H████ while he was traveling by train back to home city. He discovered the tub containing SCP-387 behind the seat he was seated in and began constructing a Lego man out of amusement. Once the Lego man became animated, Agent H████ quickly disassembled the Lego Man and delivered SCP-387 to Site-19 where it was contained. Following the discovery, all security tapes of the incident were confiscated and destroyed by the Foundation for safety purposes and to hide the whereabouts of SCP-387's location. 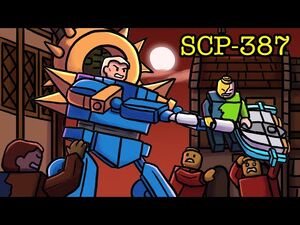 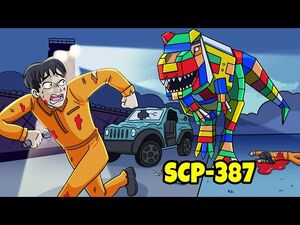 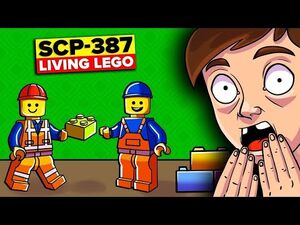