SCP-3973, is a sentient Warhammer 40,000 figurine capable of manipulating the probability of nearby moving objects. It is currently contained as a Safe-class anomaly by the SCP Foundation.

SCP-3973 was a Warhammer 40,000 figurine statue from the "Space Marines + Paint" set which through unknown means gained sentience and the power to manipulate the probability of nearby moving objects. It was originally owned alongside other non-anomalous Warhammer statues by M████ C████. This individual would bring SCP-3973 to some war game tournaments where 3973 used its power to aid its owner, whom it referred to as "commander", which resulted in the owner always winning. However, fellow competitors accused him of cheating and in one tournament 3973 tried to give its owner the lowest dice scores to fix its mistake, but eventually the owner was banned for this. This resulted in the owner becoming angry and abandoned all of his toys, including 3973, before Agent T████ of the SCP Foundation picked up the toys since he had become suspicious of this "cheating". The agent took 3973 and the other figurines back home where he discovered that when he rolled dices within a 50 cm radius of SCP-3973 they would always land on the lowest side. Because of this he handed the object to the Foundation and it was simply classified as an anomalous item instead of a full SCP classification.

For a time 3973 was kept inside a locked box within a locker in the storage room of Site-16. When Dr. Harpy began performing a routine anomaly checks on multiple items from Site-16, they tested 3973 with one coin and some dices with variable number of sides, but after the doctor accidentally knocked over multiple dices they formed a smiley face. After the doctor repeated the experiment seven more times, they requested further research into the object. Dr. Harpy began questioning 3973 about its sapience, with 3973 responding with the "2" side for yes and with the "3" side for no. After 3973 confirmed that it was sapient, Dr. Harpy formed a communication system which involved a 20-sided die and a 6-sided die which were used by 3973 to spell each letter of the sentence it wished to speak. Utilizing this system Dr. Harpy was able to interview SCP-3973 and it explained to the doctor its history. Following the end of the interview, Dr. Harpy requested to change its containment procedures that SCP-3973 should be moved to a glass box in an Anomalous Item Research Lab so it can see people more often as a "reward" for being compliant. The request was accepted and it was soon moved into a locked 30x30x30 cm acrylic glass box in Site-16's Anomalous Item Research Lab 104, while personnel under the approval of Dr. Harpy would change the scenery inside the glass once a month in order to improve 3973's mood.

SCP-3973 is a standard Warhammer 40,000 miniature plastic figurine statue reaching a height of 3.3 cm and it is covered in layers of paint from an unknown brand model paint. From its appearance SCP-3973 resembles a member of the Ultramarines chapter.

SCP-3973 is capable of manipulating the probability of every object which moves in a 50 cm radius of SCP-3973. SCP-3973 can choose which side every type of dice will land and can even land a quarter coin vertically on its side. Dr. Harpy was able to create a communication system utilizing SCP-3973's property so it could communicate with people. This system involved a 20-sided die with each number corresponding to the number of a letter in the alphabet, and if the letter is lower than the number 20 then 3973 would cause the 6-sided die to fall off the table. If all dices fall off the table that means 3973 has finished its sentence.

SCP-3973 is shown to be friendly to people. It thinks of itself as an actual soldier from the Warhammer 40,000 universe as it referred to its previous owner as "commander", to Dr. Harpy as "sergeant" and its fellow figurines as its "squad". It has demonstrated a desire to help individuals as it aided its previous owner in the war game tournaments, but lacked an understanding of the rules as it made the owner look like a cheater. 3973 felt guilty for this and tried to fix its mistake to no avail. During interviews with Foundation personnel it was very compliant with them and this good behavior allowed it to be moved to a more populated area. 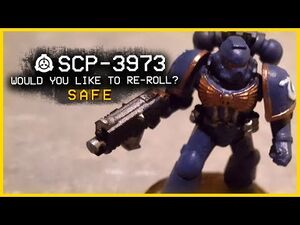 SCP-3973 │ Would you like to re-roll? │ Safe │ Probability SCP