Protector of all of the Ortothans
Neutralized anomaly

Protect his religion and people. (succeeded for a time, failed later)

SCP-4017, also known as Onteus-One-Holy, was one of the greatest warriors of the Ortothan civilization and a holy legendary hero to the Church of the Second Hytoth. It was an immortal ghostly warrior for the Ortothans, dedicating its entire life in protecting adherents of the religion through millennia before fading away. It was originally an entry for the SCP-4000 contest and won 36th place.

Not much is known about the being known as Onteus-One-Holy, but it is known that it was originally a warrior of the Ortothan Kingdom. During the Century Conquest in which the Daevites waged a war against other civilizations in Asia from 11000 BCE to 10900 BCE, Onteus-One-Holy was one of the many Ortothan warriors who opposed them. When the Daevites attacked the Ortothan city of Ikon Gate riding instances of SCP-3140, Onteus was the last remaining guardian of the city who used his powers of illusion to distract the pilots of SCP-3140 which allowed it to plant magic bombs that destroyed the tree monsters. This resulted in the surviving Daevites fleeing in defeat, while Onteus remained as the guardian of the city. This event was documented by a member of the Erliontipa civilization and stored within SCP-1726. Following this event, Onteus died under unknown circumstances and because of its connection to the "Holy Seven" lived on as a magical ghost.

As a ghost, Onteus kept fighting the enemies of the Ortothans, and during the "Zeroth Occult War" it battled armies of the Xia Dynasty and armies of the Daevites once again. It was seemingly able to defeat all of the armies during the Zeroth Occult War and protecting an Ortothan village which proceeded to steal the weaponry of the Dynasty. These heroic acts were documented by the Ortothans and put within an underground shrine dedicated to Onteus and it is unknown how Onteus, the Ortothans and the Shrine survived the K-Class scenario that ended the war. When two Sarkites infiltrated the Ortothan village, a group of Mekhanites piloting several instances of SCP-2406 approached the village with the intention of killing the Sarkites. However, a sick Onteus denied them access to the village. This prompted the Mekhanites to attack the village, but Onteus used its powers to create illusions of the Sarkites to distract them before destroying their Colossi. After the Mekhanites' defeat, Onteus captured the two Sarkites and brought the duo to them. This event was also documented by one of the present Mekhanites.

Around 270 CE, when the Roman Empire sent the Legio XXXI Naevia Victrix to conquer the anomalous civilizations, Onteus manifested again to protect an Ortothan city from them. The Legio used all of their magical powers to combat Onteus, but it was able to defeat most of their wizards and so the Legio retreated. When the Legio tried to attack the city's gate again Onteus and other Ortothans created golems resembling the demon Cicero which ambushed the Roman army, forcing them to retreat once again. On their third attack the Legio was finally able to infiltrate the city and dispose of the guards, while a member of the Legio transformed into a monster which grabbed hold of the sickened Onteus and proceeded to tear it in half. This caused Onteus to demanifest, while the city burned to the ground.

During the "Sixth Occult War" which lasted from 1875 to 1882, Onteus manifested and visited an Ortothan cult in the Bavarian Forest of Germany where he began playing with the children of the cult and taught them ancient Ortothan rituals that had been forgotten through time. After the cult members rebuild their homes Lieasa Onteon of the cult tried to talk to Onteus who was standing near a tree on cliff looking to the trees below, but when she approached it, it showed her the horrors of the wars it had participated and its failed attempts at protecting the Ortothans. Lieasa decided to let Onteus to its thoughts and the next day demanifested itself which prompted the cult to go looking for it and even trying to directly summon it, but eventually abandoned the search as they focused on protecting the town from the war.

During the "Seventh Occult War", or the Second World War, the Obskurakorps got hold of an artifact from the Norwegian branch of the Church of the Second Hytoth and put it on a cargo ship containing other anomalous artifacts. When the Allied Occult Initiative attacked the ship, Onteus manifested itself on the only surviving ship of the AOI and began battling the Obskurakorps' wizards, but due to the unhealed damage it sustained in the previous wars it found it difficult to battle two of the wizards.

As Onteus began focusing on one of the wizards, the other took the opportunity to summon a three-headed bull-like demon which impaled Onteus with its horns and threw it to the water. After its defeat it went to the library of the Toronto Ortothan Church where it met the Archpriest Albano Arnox. Onteus asked the priest if he knew it, but after seeing that he couldn't recognize it, it realized that it was slowly being forgotten by the newer Ortothan generations which resulted in its damages remaining unhealed. After Albano learned of its true nature he wrote the history that Onteus showed to him in an attempt to heal it with the spread of its knowledge before demanifesting again. Albano would include his encounter with Onteus in his book An Archpriest's Journey.

On 22:12 June 21 of 2000, when Mobile Task Force Lambda-8 Team 2 of the SCP Foundation began transporting to Armed Containment Area-40 artifacts pertaining to the Ortothan Kingdom, Onteus attacked them while on their way. Although it delivered severe damage to the MTF operatives, it didn't try to actually harm them, but wanted to know if it was still able to fight like it used to. Eventually, despite its best effort it was captured by the MTF and brought to Area-40. There Onteus finally began to succumb to its injuries and immediately requested for an interview. When Researcher Nuan Kwan began interviewing it, Onteus asked the researcher to write down its final words. As Kwan wrote down its words Onteus began encouraging its fellow Ortothans to keep fighting for their belief before melting into ectoplasm and dispersing away. Afterwards, on July 20 the Foundation reclassified it as Neutralized, with its armor and spear which has been designated SCP-4017-A being stored in Area-40 and refused to deliver its final message to the Church of the Second Hytoth.

SCP-4017's human appearance prior to its death is unknown. After becoming a spirit it appeared as a masculine humanoid with translucent grayish black body due to being comprised of ectoplasm. It possessed two yellow glowing eyes and was often described as also possessing other facial features such as mouth and nose. It wore a plate armor colored red and gold and was engraved with the image of the "Holy Seven".

SCP-4017 was shown to be a powerful warrior and illusionist, being capable of manipulating the aether and magic. It carried its iconic spear, designated SCP-4017-A, which it mostly used to channel its magical powers. It was capable of casting illusions of its enemies’ fears, produce magic bombs and was seemingly immune to magic casted by others. Thanks to its spirit physiology, SCP-4017 was mostly comprised of ectoplasm which allowed it to manifest itself whatever place it wanted and could not be damaged by physical attacks, although powerful magical attacks caused it to bleed. Despite its powers, time and injuries got better of it, since most Ortothans began forgetting about it which eventually resulted in its permanent death.

SCP-4017 was shown to be a devout member of the ancient Ortothans and very protective of its people and their successor the Church of the Second Hytoth as it dedicated its entire immortal life to the very end to protect them and their artifacts through millennia and encouraging them to fight for their belief.

It was seemingly very kind to its people as it always helped them in times of need and often played with children of the Church and teaching them forgotten Ortothan traditions.

Despite its hostility to outsiders it never actually harmed its enemies in some cases, unless in dire situations, and instead used its illusions to scare enemies off. 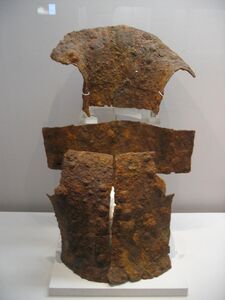 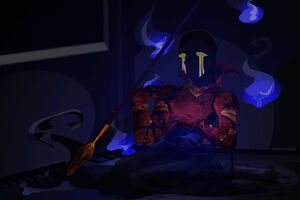 SCP-4017 after its defeat at the hands of the Obskurakorps.