Escape the Foundation and check on his family (failed)

SCP-4051 also known as "Your Friendly Neighborhood Keter", or Rainer is a powerful boy who was once classified as an Euclid class anomaly by the SCP Foundation before being reclassified as Keter. He is one of the more benevolent sentient anomalies currently contained by the Foundation who wants to help the good and innocent people in any way he can.

SCP-4051 was originally a young teenage boy named Rainer Miller. He was born on February 7th, but around the age of twelve he would witness his violent father abusing his mother before running away in order to not get caught, leaving Rainer alone with his mother. After discovering his anomalous powers he decided to use his powers to benefit the innocent people and fight against criminals such as the Looming Shadow group. He kept doing this for a while until in August of 2012 when he was filmed exhibiting his powers to fight some criminals and the video went viral which caused the SCP Foundation to find out about Rainer. They sent Mobile Task Force Pi-1 to capture Rainer while the video was removed. The MTF was able to successfuly detain Rainer despite the boy fighting back and brought him to Site-17 where he was designated SCP-4051. There after being informed about the nature of the SCP Foundation SCP-4051 understood that they were benevolent people who wished to protect humanity and so he complied to most of their orders while being lied to about returning to his family.

The Foundation then decided to conduct a series of tests to see how SCP-4051's powers really worked, but overtime SCP-4051 grew frustrated of how the Foundation constantly promised him that he would meet his family but never actually kept their promise. During a test Dr. Anthony Roswell ordered SCP-4051 to manifest a circular square, the color blue, and a statement that says it is false, SCP-4051 instead manifested several paracognitohazards that sent Roswell into a coma. Eventually, SCP-4051 decided to organize a plan to escape by using his powers to get a bomb and a protective shield in order to destroy his chamber's door. After successfully destroying the door, SCP-4051 manifested a aluminum baseball bat in order to fight the arriving security personnel that would try to recontain him. Unfortunately, he was detained again by the personnel and recontained within another more enhanced chamber. Seeing that his mental state was beggining to deteriorate the Foundation assigned therapist Yesenia to do therapy sessions with SCP-4051. SCP-4051 explained to Dr. Yesenia the reason why he wanted to escape but also said that he held no rancor towards the Foundation and wished to help as mush as possible despite his treatment. The experiments then resumed before Dr. Edwards, who held rancor about SCP-4051 for putting his brother Dr. Roswell into a critical state of coma, deemed that anymore experiments weren't necessary anymore and that they got everything that they needed. As revenge for his brother, Edwards proposed Procedure 350-PROMETHEAN which involved paralyzing SCP-4051 and conducting a painful surgery on him in order to synthesize the Y-909 amnestic drug and do further research on his abilities in the hopes of helping Roswell. Following a failed attempt at conducting the procedure on SCP-4051, Edwards had SCP-4051 have another therapy session with Dr. Yesenia before attempting again at the procedure.

After learning that his father had finally been put to jail for murder, Dr. Edwards continued with Procedure 350-PROMETHEAN, this time going more smoothly than prior mostly due to SCP-4051 becoming completely compliant with Foundation's orders. After telling Dr. Yesenia that he wanted to help the Foundation in more direct way with actions instead of letting doctors conduct experiments, Yesenia was able to convince the higher ups to let SCP-4051 help personnel in maintenance and general repairs while being accompanied by armed guards. On November 21st of 2012, while SCP-4051 was assisting in maintenance, ██ instances of SCP-████-█ breached containment and began attacking various personnel. Thankfully SCP-4051 was able to kill the instances by manifesting fire and helping armed personnel in defending everyone. Despite his help, a week after the incident the Foundation had Dr. Yesenia to reprimand SCP-4051 for unauthorized use of his powers and was punished by not being allowed in helping in maintenance for two months. On February 7th of 2013, SCP-4051 celebrated his first birthday under Foundation custody and as a present Dr. Yesenia tried giving him a treadmill as a form of entertainemnt, but after being denied by Edwards she instead gifted the boy a chess set. On February 28th, SCP-4051 assisted personnel in recontaining SCP-████ by incapacitating it with the usage of a large amount of methoxyflurane which he manifested. On April 27th, while helping with maintenance again a lead beam fell on SCP-4051 which injured him and was allowed by personnel to manifest bandages in order to conceal his wound.

After Dr. Yesenia convinced Dir. Graham to let SCP-4051 help the Foundation by letting the boy help in the recovery of a low-threat anomaly in order to continue funding on the experiments, SCP-4051 was allowed to go help a Foundation team comprised of four members of MTF Psi-7 and one member of MTF Sigma-3 in investigating possible anomalous activity inside a building located in Chicago, Illinois. Before being sent alongside the MTF SCP-4051 was given Class-S "Slow Burn" amnestic that would remove his memories of the mission. Upon entering the abandoned building the team found thaumaturgical graffiti and decided to follow where they led down to the sublevels and eventually coming across several giant spiders with a humanoid heads whose abilities had been enhanced thanks to the runes on the walls. After killing the arachnid entities the team entered the central room where they found even more glyphs and a female child. However, the child soon transformed into an enormous being similar to the arachnids and attacked them before using the glyphs to open a portal to some unknown place. At the same time more arachnid entities arrived and attacked the team, sending everyone into the portal except for SCP-4051 who managed to kill the enemies by copying the enhancement glyphs and putting them on himself. Disobeying orders from SiteCommand SCP-4051 went through the portal to save the rest of the team, and upon entering found S-3 Morgan being attacked by an Aleph-Order semi-physical entity. SCP-4051 was able to use his powers to destroy the entity before helping S-3 Morgan with his injuries. Morgan then explained to SiteCommand and SCP-4051 that the giant spider that had attacked them was attempting to re-enter the Wanderer's Library and they needed to stop while rescuing the other teammates. They then encounter two hostile entities battling each other, and attempted to run past them, but the two entities took notice of the duo and used their powers to grab them. As one of the entities which was known as the Shroud began absorbing them SCP-4051 in a panic manifested the opposite counterpart of the Shroud, resulting in the destruction of both entities while the other entity was banished by Morgan.

After seeing that SCP-4051 was now under distress because of the experience Morgan asked SiteCommand to abort the mission and return to base, but the SiteCommand refused since during the mission Dr. Edwards joined the Command and ordered to keep going. As they kept going the duo came across another entity named Lazarus who was able to see the pain that SCP-4051 went through because of the Foundation and tried to convince him to abandon the organization, but despite this SCP-4051 refused to leave the Foundation. Lazarus, who was unwilling to let SCP-4051 be a slave to the Foundation, then attempted to enter his mind, causing the Foundation to prematurely activate the amnestic within SCP-4051's brain in order to purge Lazarus. However, although SCP-4051 was freed from Lazarus' control his mind also collapsed, causing him to all alone directly into the giant spider that had opened the portal and used his powers to destroy it, along with a large section the place they were in. The second retrevial team arrived and rescued an uncoscious SCP-4051 and the surviving team memebers and sent them back to Site-17. There SCP-4051 had another session with Dr. Yesenia who informed him that in light of his new powers of inversion he had been reclassified as Keter and was not allowed to exit his chamber anymore.

When the Foundation found SCP-4415, a chamber which contained several alternate dimensions that acted as personal paradises for anomalous humanoids who had died as a result of Graham's abuse, they decided to send SCP-4051 to explore these dimensions since he possessed some experience from his previous trip and only anomalous humanoids could enter SCP-4415. However, after each exploratory mission SCP-4051 was administered amnestics in order to make him forget these experiences. As part of Procedure 8917, which involved the Foundation constantly killing and resurrecting SCP-4260, the embodiment of Death, in order to grant the O5 Council immortality, the Foundation had SCP-4051 manifest a copy of SCP-4260 after it died from MTF Xi-2 detonating an electromagnetic pulse grenade.

SCP-4051 was seemingly able to manifest any type of item he was thinking about, ranging from mundane objects such as nets, sugar filled pills, a glass of water, baseball bats and duct tape, but was also able to manifest dangerous items such bombs, protection sheets and Class-E paracognitohazards. During a mission with the MTF, SCP-4051 discovered a newfound power that allowed him to destroy other anomalies by manifesting their complete opposite from the special dimensions.

SCP-4051 was shown to be a kind boy who was very collaborative with the Foundation and saw them as not being bad through his expectations. However, that was until when time went on, all of his questions were all declined and ignored by the Foundation. As a result, SCP-4051 started to feel depressed, aggressive, and have bad thoughts of the Foundation, thinking that they were evil. His depression was also slowly infecting his mental health, which lead to him one day attempting to breach his containment chamber and escape. After being apprehended by the task force who were deployed to stop him, he soon lost some of his permissions which further detrimented his mental state. Despite all of this, SCP-4051 decided to keep helping the Foundation in their quest at protecting the world. Under the horrible abuse of both Dr. Edwards and Dir. Graham, SCP-4051 seemingly developed stockholm syndrome, obeying their every order while expressing no complains for his treatment. Because of his now poor mental state SCP-4051 often acted on his own and would not think straight during certain missions, but nonetheless still remaining completely loyal to his abuser.

SCP-4051 was a boy who wore a purple shirt, with normal pants, and possessed short blonde hair, and blue eyes. 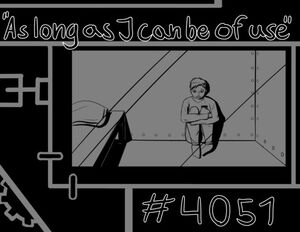 Locked inside his chamber. 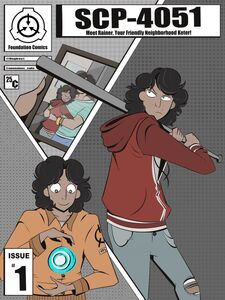 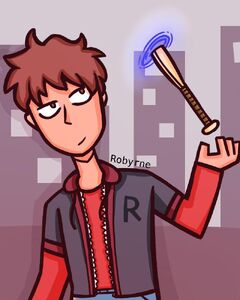 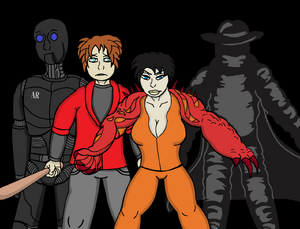 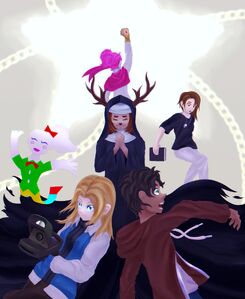 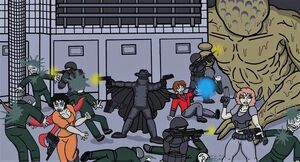 SCP-4051 alongside MTF Alpha-9 fighting the Blessed Militia and an Unclean. 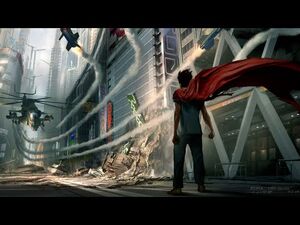 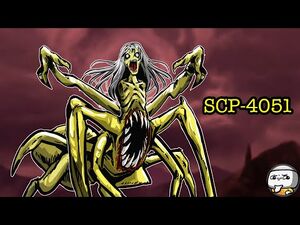