SCP-4128, real name Samson Sachs, is a Euclid-class superhuman SCP contained by the SCP Foundation. He is notable for using his anomalous body for good and is determined to fight for justice. In-universe he was the inspiration for Superman.

Samson Sachs was born in 1913 and lived on the outskirts of Glenville with his parents. At a very early age his parents found out about his superhuman abilities when he began breaking stuff which were hard to even be damaged, and as a result he would accidentally break the fingers of his mother. At the age of nineteen, when his parents sent him to the town nearby for supplies as per usual he witnessed Mitchell Siegel with his partner and son robbing the store. Samson tried to fight back, but was shot and became unconscious. Upon waking up and seeing that an old man had died of a heart attack due to what had happened, Samson for the first time used his speed to go after the shoplifters with the son having stolen Sachs' father's truck as a getaway vehicle. He managed to catch up with Mitchell and his partner and then picked up their car and threw them which resulted in their deaths. Samson became horrified of what he had done before being approached by Siegel's son who parked the truck. The two talked with each other, with Siegel revealing to Sachs that his name was Jerry and asked him questions regarding his powers, but Sachs answered to only a few of them and for the rest he lied stating that he came from an alien planet. This would inspire Siegel to create the character of Superman.

Years following the publication of Action Comics #1, Samson at first thought of this as a coincidence before figuring out that he was the inspiration for the comic. He became enamored and inspired by Siegel's comics and decided to leave his job as an accountant and become a vigilante. However, during his first attempts at trying to be a hero he would accidentally horribly kill the criminals he was fighting which mentally affected Sachs. Despite all of this, Samson still tried to become a hero and fight off crime.

The SCP Foundation first acknowledged Samson in 1975 via their Anomalous Signature Recognition Program when he saved a woman who had her car lodged under a tractor-trailer in Belgium by simply pulling the car out. In January 24 of 1978, Samson broke inside the house of Daniel ████████ and helped a girl named Franziska, who had been kidnapped and held prisoner by Daniel for two years, to finally escape and report to the police. In August 31, 1985, Samson began going after Richard Ramirez, a serial killer and rapist also known as the "The Night Stalker". When Ramirez tried to carjack a woman in the Sante Anne Highway, Samson caught up to him and rendered him unconscious allowing surrounding bystanders to apprehend him and sending him to the police. In March 5th, 1990, in Austin, Texas, Samson was able to catch four terrorists who had been drive-by shooting, and trapped them in their car before taking them on the roof of a nearby abandoned factory. In April 28 of 2000, in Bronx, New York, Samson faced Jason ███████, a local resident of an apartment complex on Unionport Road, who had been robing fellow residents via his gun and after some severe beating rendered him unconscious leaving the police to detain him. Eventually in 2018 in Brooklyn, Samson went after a cocaine trafficker named David ████████ and broke inside his apartment. However, he instead found David's fifteen year old son who tried a sneak attack on Sachs. Sachs was caught off guard and accidentally crushed the boy's chest with his punch, instantly killing him. Samson became dismayed by this and was further horrified after seeing David crying over his son's dead body. Following this, Samson decided that he had caused enough pain and willingly turned himself over to the police. He was questioned by the police on his murder of David's son, Kyaus, and Samson tried to explain to them his powers. This left him being finally detained by the Foundation who spent 48 years trying to detain him and have covering up all of his public actions.

He was subsequently given the designation of SCP-4128 and taken to Site-88 where he was held at a Humanoid Containment Cell in Floor 18 which had been modified in manner to not allow him to breach containment. These modifications included heavily fortifying the walls and door of his cell and equipped with gas which would make SCP-4128 unconscious. During his time under the Foundation's custody, he was interviewed by Dr. Markstrom and during this interviews 4128 explained to the Foundation his origin and activity, and after personnel noticed his depression they arranged a psychological evaluation on 4128 every two weeks.

SCP-4128 appears to be a Caucasian male with no abnormal appearance. Despite looking like a middle-aged man he is in fact 108 years old.

SCP-4128 possesses great superhuman abilities due to a mutation, possibly an anomalous version of the myostatin-related hypertrophy, of unknown origin. His epidermic cells are formed from a polymeric protein, giving him an innate ability to withstand extreme physical trauma and his bones are eight times denser than that of a normal human most likely due to sclerosteosis. SCP-4128 has immense strength and endurance which allows him to lift objects from 3,500 kg to over 20,000 kg. He can sprint at a speed of approximately 85 km/h, and is capable to vertically leap at a height of 18 meters. He is also seemingly immortal, since he is 108 years old and still looks like a middle-aged man. However, this mutation is also causing SCP-4128 loss of hearing on his left ear due to excessive bone growth putting pressure on his cranial nerves, forcing him to require a hearing aid, and it has been revealed that he also suffers from minor seizures.

SCP-4128 has proven to be a very heroic individual with well intentions. He always tries to use his powers for good, like protecting and rescuing innocent people, and fighting criminals, while not really caring for his wellbeing. However, he also can get easily angry which often result in him lashing out and losing a bit of control. This, coupled with his inexperience in vigilantism, often results in 4128 accidentally harming his opponents more than needed and in some cases even murdering them. This has heavily affected 4128 who eventually developed some sort of depression because of this, eventually culminating in him completely giving up on being a superhero. This has prompted the Foundation to have the on-site psychiatrist conduct psychological evaluations on him. 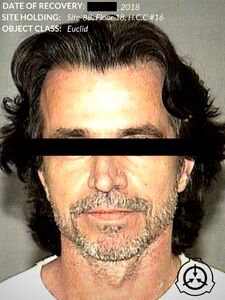 Mugshot of SCP-4128 taken shortly after transferring to Site-88. 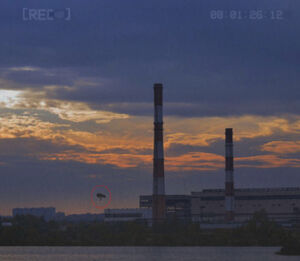 SCP-4128 taking the four terrorists to the factory. 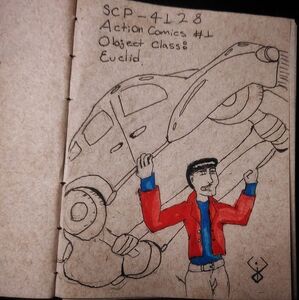