SCP-4793, also known as Stele, is a character in the SCP Mythos. He is a skilled and benevolent Greek warrior who became a demigod. He was later detained by the SCP Foundation which classified him as Euclid-class anomalous humanoid who cooperated with them.

Androcles was once a brave and skilled warrior of Greece who only lived for battle and was greatly admired by his countrymen. He was so skilled and famous that the god of war Ares descended from Olympus and decided to fight Androcles. The two fought a great battle for ten days which left Ares so impressed that he mixed Androcles' blood with his own turning him into a demigod. One day, Androcles met a Pict woman named Arabel from a distant land that would become known as modern Scotland. Just like him, Arabel was a fierce warrior and the two fought each other and they soon fell in love. However, Ares became jealous and killed Arabel which caused Androcles great dismay. He was so devastated from his loss that he became trapped inside a stele of his image inside a cavern in a mountain of southern Greece.

His resting place was eventually discovered in March 1st of 2016 by some operatives of the Chaos Insurgency. While the mercenaries were working on the monuments inside the cave, an Insurgent accidentally cut himself and tried to clean the wound by wiping it on the stele depicting Androcles. This caused Androcles to be freed from the stele and lands on his knees, but he became disoriented and was unable to understand what was going on. The Insurgents decided to wound him for fun which caused Androcles to reluctantly engage in a fight. He was able to easily beat them all before knocking out their leader, while a damaged speaker played on loop the song "Don’t Fear the Reaper". This whole incident was witnessed by several members of Mobile Task Force Upsilon-11 lead by Captain Holly Shore and they decided approach Androcles who began crying and decided to go along with them after being assured that they wanted to help him.

He was transported to the SCP Foundation's Site-20 in New Mexico where he was designated SCP-4793 and the cave where he was found as SCP-4793-A. He was subsequently interviewed by Doctor Eleanor Fitz-Patrick and after she offered him a supply of modern books in exchange for good behavior she tried to ask SCP-4793 about his past, but due to his previous trauma he was unable to recall his memories which he didn't want to remember. When the site's director Jack Hargraves found out about this newly acquired anomaly he saw potential in using him for combat against enemies of the Foundation and sought to examine his combat skills to see if he can be included in MTF Alpha-9. During combat testing Hargraves forced SCP-4793 to fight Shore, but Androcles didn't wish to fight anymore so Hargraves began threatening to kill Shore which caused 4793 to properly fight her. After some time, SCP-4793 was able to catch up with the modern world and began bonding with Shore more and more, although he felt uncomfortable with the treatment conducted by Hargraves. In July 7th of 2018, while doing test combat with Shore she informed 4793 on how the Foundation tried to weaponize anomalies before proceeding to fight him, but after the fight he began remembering his wife which caused him to go to an unstable state. After regaining himself he explained his frustration to Fitz-Patrick about his previous life and the reason why he didn't want to fight.

In December 28 2018, while SCP-4793 and Shore were training with firearms, an instance of Xo6 broke inside their training room and attacked them. SCP-4793 seeing that the black creature was intelligent tried to talk to it, but it went on to attack Shore prompting 4793 to kill which also caused him to start remembering everything. As several instances of Xo6 began breaching containment, SCP-4793 and Shore joined with the rest of MTF Upsilon-11 in order to rescue personnel being attacked by the monsters. MTF Upsilon-11 and 4793 were able to fend off several instances of Xo6 before unlocking and entering a room where the remaining personnel hid. However, McCalloway was then suddenly snatched up by a Xo6-2 and dragged to the D-Block. Shore and Zimmerman decided to pursue it, while 4793 and the rest of the MTF helped the doctors to escape but after splitting 4793 and the remaining MTF and personnel were ambushed by a huge group of Xo6s. After killing them, 4793 figured that Shore and Zimmerman also went into a trap and went after them to Floor Seven where he fought off other Xo6s. During the fight he temporarily went into a berserker state and killed anything in front of him and nearly wounded Shore and Zimmerman before coming to his senses. They then proceeded to go the D-Block where they found a wounded McCalloway and the remaining D-Class and Officers working together. After figuring a safe way out of the site though a elevator Shore ordered 4793 to assist the survivors in their escape while she and Zimmerman went to detonate the reactor. However, after a part of the group escaped through the damaged elevator, another group of Xo6s attacked and began killing several of them. During the fight, Zimmerman and McCalloway were dragged by another Xo6-2 while 4793 grabbed Shore and threw her at the rest of the surviving personnel who went to the elevator and ordered them to hold her while he remained behind.

While descending through the site's floors 4793 encountered a friendly instance of Xo6 named Argos carrying a space helmet which it gave to 4793. 4793 decided to use the helmet to record his final message to Holly. He explained his origin to her and how she reminded him of his wife and told her that she loved him. After the batteries died out he and Argo,s which was later designated Xo6-A, managed to find a wounded Zimmerman and the corpse of McCalloway. After having Zimmerman escape through the elevator, 4793 used Zimmerman's camera batteries to record his experience but not before giving his message to the wounded agent. Upon arriving in the lab where the Xo6 were created 4793 found out that Hargraves had used 4793's blood to create the Xo6s. He then found a wounded Hargraves who began taunting 4793 about his killer nature, but 4793 was able to suppress his rage and dragged Hargraves to the elevator so he could also escape. Xo6-A then helped 4793 in locating Fitz-Patrick and two other researchers and helped them escape alongside Hargraves through the elevator. 4793 then proceeded to go to the reactor and after being assured by the site's AI that all surviving personnel escaped he finally arrived to the reactor where he came across Xo6-3. The creature recognized him and being grateful that 4793 helped its creator escape it offered him a chance to also escape and leave the Xo6 be. SCP-4793 refused and lunged towards the reactor. This caused the reactor to explode which destroyed all of Site-20 killing all instances of Xo6s which seemingly included SCP-4793 and Xo6-A. In the aftermath a discussion was opened about the reclassification of 4793 to Neutralized.

SCP-4793 was originally an extremely skilled warrior with great strength and martial skill to rival that of Ares the Greek god of war. After Ares gave his blood to 4973 the warrior became a demigod which further improved his physiology. Ares' blood was of an unknown blood type which was identified by a series of gold-colored filaments running throughout the cell. This allowed SCP-4793 to fully regenerate from his wounds in a matter of seconds, with the wounded area becoming even more durable. However, if another wound is not delivered to a different part of his body than the healed area will not stop regenerating which caused tumorous growths to generate and because of this a liter of blood was drawn from him every day. This also caused 4793 to require more nutrients but to a lesser extent since his biological system is more advanced than that of a normal person. SCP-4793 could transform any object that resembled a sword or armor into actual swords or armors simply by touch. He had no control over this property and when he involuntarily transforms this objects by accident he immediately tried dispose of them. He also seemed to be Omnilingual since he heard people talking to him in Greece despite them actually talking in English. Despite his ancient origin SCP-4793 was able to adapt to the modern world and was somewhat capable of using modern firearm.

SCP-4793 was originally a honorable and determined warrior obsessed with war. He had spent most of his life fighting for his land, but after meeting Arabel he was impressed by her skills and the two fell in love and together they decided to fight for worldwide peace. However, after his wife was killed by Ares he became so distraught by this that he was locked inside his stele. Even though he had lost most of his memories about his previous life after reawakening in the modern world, he was still affected by the pain of his past and because of this he outright refused to fight for anything. Despite being locked up by the Foundation he formed some friendships with personnel such as Fitz-Patrick and especially Holly Shores and was shown to be tolerant to people like Hargraves. He became loyal to his new allies and came to care for them to the point of fighting again like in the old times and sacrificing himself to ensure their wellbeing. 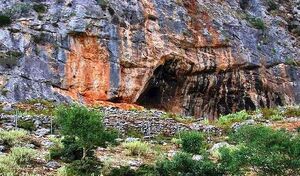 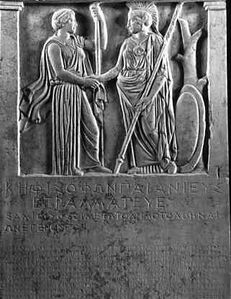 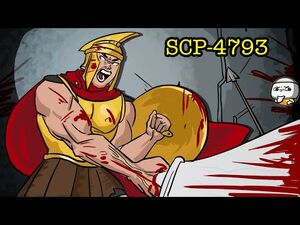