Heroes Wiki
Register
Don't have an account?
Sign In
Advertisement
in: Mature, Articles under construction, SCP Foundation Heroes,
and 21 more

Carry SCP-666 to a new location within the area.

SCP-666-1 is a character in SCP Foundation Mythos. It is a supernatural being inhabiting SCP-666, a teleporting Tibetan yurt that can only be accessed to addicts how suffer from substance abuse. Once confronting the addict SCP-666-1 would take the appearance of a person who was involved in addict's past, and would at first tempt them to indulge in their addiction. If the addict gave in SCP-666-1 would horribly punish them, but if they refused to return to their addiction then SCP-666-1 would comfort them and completely remove their addiction and help them start a new life.

SCP-666-1 seems to have full control over the reality inside SCP-666 which it sometimes carries it to a new place within the area when directly unobserved. When an addict enters inside SCP-666, the interior space would take the appearance of an environment associated with the addict's substance abuse. They would also experience hallucinations that made their experience inside even more vivid.

SCP-666-1's always changes from person to person. Each addict would perceive SCP-666-1 as a familiar person related to their experience of substance abuse.

When SCP-666-1 first confronted addicts it would tempt them into indulging in their respective addictions with a passive-aggressive attitude, while at the same time discouraging them from it. If the addict gave in SCP-666-1 would become increasingly hostile and directly kill them by forcefully injecting them with the substance. If the addict felt remorse and refused to get back to their addiction SCP-666-1 would become more genuinely friendly while continuing their confrontation before allowing them to leave the yurt and cure them of their addiction. 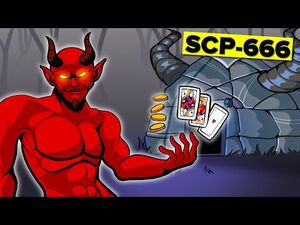