SCP-734, also known as The Baby, is a Keter-class human infant currently contained by the SCP Foundation with the power to flake and completely destroy any human body over time. Despite his dangerous power the Foundation plans to use SCP-734 as their special bio-weapon when he grows up.

SCP-734 was born at an unknown medical hospital where his mother gave birth to him. Shortly after his birth his mother was possibly affected by his anomaly and subsequently passed away at the hospital. While in the maternity ward SCP-734 was accidentally exposed to several nurses, four doctors, and one infant all of whom began succumbing to the lethal and painful effects of the anomalous baby. This quickly alarmed medical staff who thought that a massive outbreak of an unknown form of flesh-eating bacteria was happening which attracted the attention of the SCP Foundation. Foundation operatives quarantined the area and the affected staff and after some interviews they were able to deduce that the cause came from SCP-734 who isolated and contained by the Foundation.

Because of his lethal effect SCP-734 was classified as Keter and kept in a containment area furnished with object necessary for a baby of his age. Personnel who interacted with SCP-734 such as his handler were forced to wear contained atmosphere haz-mat suits all the time while inside his area, with his handler, who changed and fed the baby with the required nutrients reviewed and adjusted monthly, being rotated every four hours. Since his effects were not as infective as it was deadly an arterial catheter was installed into SCP-734’s body in order to daily draw variable amount of blood which would be studied and stored within a cryogenic storage for five years before being replaced.

When an agent was handling SCP-734 she didn't think that he was that dangerous since he was simply just a baby and so she took off her mask, but in that moment SCP-734 sneezed on her face causing her face to be affected by his anomaly and die while in quarantine. During testing the Foundation thought of using SCP-734 for their own benefit and decided to raise him as a Foundation operative who would go on mission and use his ability against their enemies. After some years SCP-734 was shown to be loyal to the SCP Foundation and was approved to be trained as a weaponized anomaly.

SCP-734 resembled a human infant of seven and eight months of age with no physical abnormalities.

SCP-734 has no abnormal genetic mutations, infections, or rare cellular disorders and appears to have a normal development and health similar to that of typical child of his age. Despite this if SCP-734 or any of his cells comes into contact with human tissue the tissue will mysteriously begin to rapidly breakdown and after two it will start to flake away at the rate of 0.5mm/minute. The affected cells will lose cohesion causing patches of skin to peel and fall off from the area of contact after destroying the complete layer for five hours the process will proceed to the next layers which will include muscles, nerves and bones until there is nothing left. This process is extremely painful to affected subjects and currently there is no cure for it as its origins and nature are currently unknown since it cannot be transmitted from the victim to another person and amputation of the affected area has proven to be partially successful of avoiding it. Apart from this main feature SCP-734 has shown above-average intelligence and physical aptitude which prompted the Foundation to train him into becoming a special Foundation operative.

Being a baby SCP-734 has yet to develop a characteristic personality, but thus far has shown above-average intelligence. After some years had passed SCP-734 was shown to be extremely loyal to the SCP Foundation. 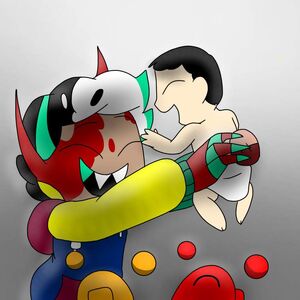 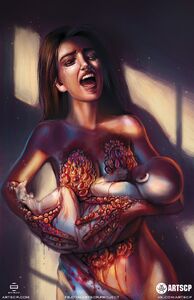 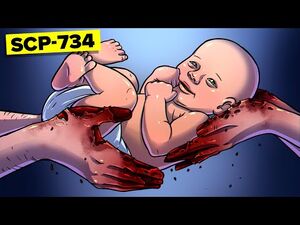