SCP-990, also known as the Dream Man, is a recurring character in the SCP FoundationMythos. He is Keter-level anomaly that is yet to be contained due to his nature. He is a humanoid figure who takes the shape of a normal human male dressed in a Cold War era business suit with a hat. He only appears in the dreams of Foundation personnel thus far.

Due to lack of canon in the SCP universe, there have been several stories telling the origins of SCP-990. The readers are free to choose whatever origin for their headcanon.

The man who would become SCP-990 was a silent despot who influenced things away from public view and lived in the ancient past back when civilization was ruled by the goddess and third-queen Mnemosyne who could manipulate the timelines using the language she had written. Although Mnemosyne was at first kind to the people she soon became a tyrant and made sure that she would be the only one who would rule humanity. The man and his friend Manna saw what was happening and the man tried to stop her.

He at first sought help from Mnemosyne's daughter Clio and together tried to convince the queen to free humanity and use her powers to eliminate the anomalies plaguing the world, but Mnemosyne refused and instead made things worse. He pleaded to her, but eventually he decided to threaten her which caused the queen to use her word powers to erase the man and his own kingdom from existence, now only living as just a memory.

SCP-990 was presumably an ordinary archeologist named Frederick William Abernathy who hid his real findings from the public, leaving everyone to think that he died in obscurity. In actuality after he discovered SCP-4960 he encountered the Gate Guardian who told him to "PREPARE" and lead Frederick to form the Secret Society for Cultural Preservation.

In the tale "Dusk", SCP-990 is portrayed as a Oneiroi, representations of people who dream in the connected dream world, capable of interacting with one another, and some can even leave their physical bodies and forever live in the dream world as a Oneiroi. SCP-990 appears to be one of the more human-looking Oneirois, just like the group known as Oneiroi West, who left his body and decided to use his newfound state of existence to aid the SCP Foundation in preserving Humanity.

SCP-990 was originally a device constructed based on the Oneiroi Astral Synchroniser v3.0 from Universe 3513-Omega-Purple-Zulu where humanity created a digital dream world called the Oneiroi Gardens and over 90% of world's population used similar devices to access the mainframe before it collapsed resulting in the end of the universe's world. The SCP-990 device allowed Foundation agents to project themselves into the dreams of people of alternate universes, appearing as a Caucasian man.

Agent Nykos became the prime user of SCP-990 and was referred to as Agent 990-Morpheus. She went inside the dreams of Foundation personnel of different universes warning them of threats that her universe's Foundation would cause. However, after the Oneiroi Collective became aware of the Foundation's use of their device without crediting them, prevented the Foundation from ever using it again until a proper deal was made. Furthermore, this universe's Foundation personnel began experiencing dreams featuring Agent 990-Morpheus' avatar, suggesting that echoes of the avatar were created, or the Oneiroi Collective began using the device for their own goals.

SCP-990 was originally a unknown man who was possibly involved in a mysterious sleep experiment conducted by the Department of Abnormalities in a secret underground facility underneath a hut inland of Princess Elizabeth Land, Antarctica, which would be later designated as SCP-5988 and also produced the entity known as SCP-515. The bandaged body held with six chains and connected to cables and tubes in his spine and back of the head, left within the facility after its abandonment might have been SCP-990's original body.

Eventually SCP-990 began appearing to SCP Foundation personnel through dreams, predicting several events, in a scale from bad to worse, from the deaths of certain personnel, to a doomsday event that would cause the destruction of the world, all of which came true or nearly come true before the MTF were sent to avert them. He outlined the scenes in the dreams and showed them to the said person.

For now, there are no reports that SCP-990 appears in the dreams of non-Foundation personnel. The first time that SCP Foundation acknowledged SCP-990 as a Keter-level threat was after a certain agent involved with SCP-990 in his nightmarish dreams, in spite of much other personnel of the Foundation claimed that they dreamed about a man with business suit and hat.

In an event later known as event-990-07, an agent from the Foundation fell asleep and slept for over 40 hours, failing to report for duty at his assigned time. He then awakened in a highly agitated state, running through the facility and yelling loudly about "the end of the world". Later, the agent was heavily sedated to be calmed down. In spite of this, all of this agent's bodily functions remained in a dangerously accelerated state. His heart rate increased and his blood pressure was high.

The agent described a man matching the regular appearance of SCP-990 appearing in his nightmare and trapped him inside the dream sequence. In the agent's dream, the man described in great detail a series of events that would lead to several tactical nuclear missiles being launched into the Eurasia continent. If this crisis happened, it would ultimately exterminate nearly 98% of the human race and destroy the human society indefinitely. The agent claimed that SCP-990 had outlined the catastrophic scene to him while he was trapped in his dream.

Immediately, Mobile Task Force was dispatched to eliminate the initial threat that would begin the chain of a doomsday scenario, successfully averting the crisis. Nevertheless, the agent later died of shock-like symptoms probably due to his realistic nightmares. Since then, SCP-990 has frequently appeared to many Foundation personnel and made similar threats. He successfully prophesied the death of several doctors as well. This eventually made the Foundation taking SCP-990 seriously.

In spite of seemingly harmless for most of the times, SCP-990 poses a serious risk about the releasing of information about the Foundation to others via dreams, and so risking to break the Foundations' anonymity. Therefore, SCP-990 is primarily classified as Keter. Due to SCP-990's nature, of which he was never seen in real-life for now, no special containment procedure is brought out thus far.

When a universe devouring entity began to consume the Foundation's universe the Foundation decided to move the solar system to another universe in order to survive. However, this caused the sun to be weakened, leaving SCP-499 to die. In order to keep the sun moving the Foundation began cloning SCP-499 and keep the public from knowing anything. When the 55th clone of 499 began dying, 990 visited him in his dream in order to comfort him, and stated that he himself would join him soon.

In "Standard Dream Report 66-Y 990.2", SCP-001 (Past and Future) crucified SCP-990 and used his powers to send an ultimatum to O5-2, appearing as her dead child to emotionally torture her, driving her to commit suicide.

As the majority of humanity began transcending into gods due to SCP-3396, causing the slow destruction of Earth, SCP-990 visited a frustrated O5-1 in his bunker. Since they both were about to die, O5-1 asked 990 why didn't he warn them of this, with 990 answering that it wasn't for the greater good anymore.

When the O5 Council made a deal with SCP-001 (Atonement) to save their universe at the cost of destroying others, this also included the Oneroi world inhabited by SCP-990. As his world began to slowly be destroyed 990 visited a member of the council one last time before dying alongside his world.

SCP-990 has the power to communicate with people through dreams which he can also seemingly manipulate. He is also capable predicting catastrophes that are going to happen in the near future. However, after communicating with Foundation personnel, several of them will experience extreme shock and may in some cases die.

Although his true nature is largely unknown due to lack of information, during an interview with an unknown doctor SCP-990 showed that he is not malevolent as he only wants to help the Foundation in protecting the world, and didn’t intent to appear threatening or induce shock to personnel.

SCP-990 always appears in the Foundation's personnel as a man wearing a business suit and hat reminiscent of the Cold War era. However, due to the nature of dreams his face constantly changes to each person, as shown in "Standard Dream Report 66-Y 990.1" in which he took the face of Dr. ██████████ when he appeared in the doctor's dream.

In spite of never making a major in-game appearance, SCP-990 only appeared as a cameo in loading screens. In the loading screens, SCP-990 will speak to the player, saying as if the player was dreaming. Whether it is true or not remains ambiguous. 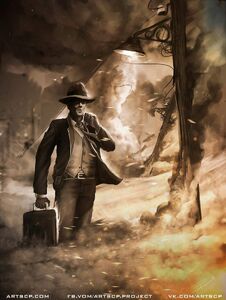 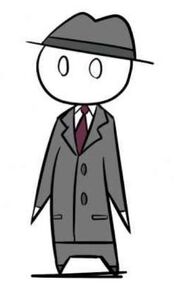 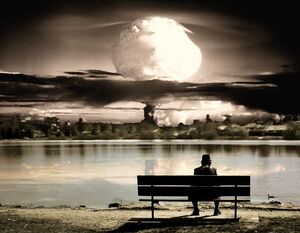 Image of SCP-990 before being removed from the wiki. 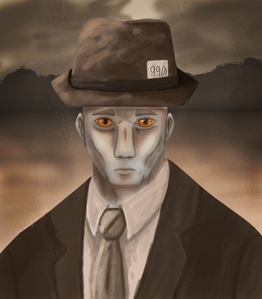 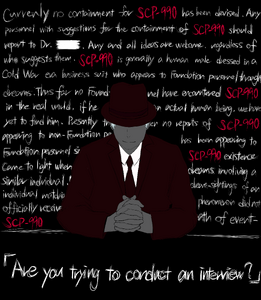 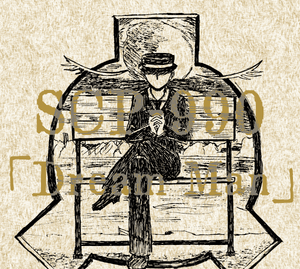 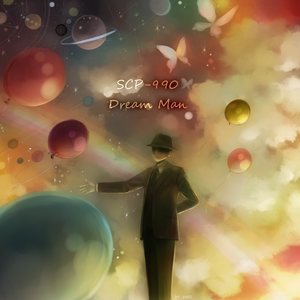 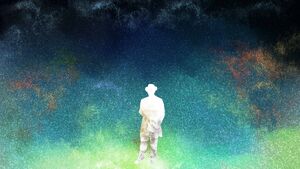 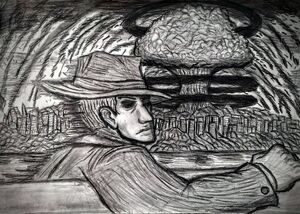 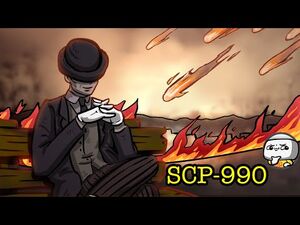 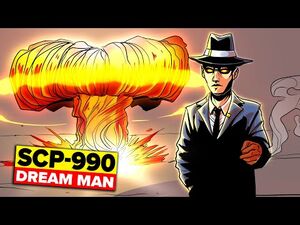 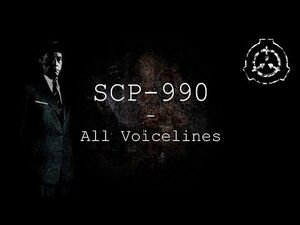 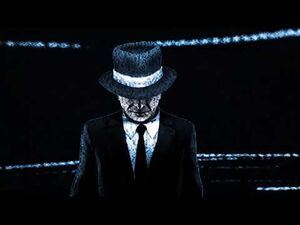