Sabrina Spellman is the title character of the supernatural sitcom, Sabrina the Teenage Witch.

She was portrayed by Melissa Joan Hart.

Sabrina is typically a very out-going, amiable and genuinely caring person. She looks out and stands up for her friends Jenny and Valerie whenever the cheerleaders, particulararly Libby, would insult or be condecending towards them, while simultaneously taking slurs and insults herself.

She is, for the most part, very level-headed and clever although some of her ideas when it comes to using magic often land her in trouble, which often leads her to panic in some cases.

Sabrina is very socially aware and will often speak out against unfair treatment of injustices against those around her. Her often bubbly personality can occasionally be annoying to some around her, which she realizes when Valerie begins turning into her exact duplicate in the third season and when both Roxie and her cynical boss Annie comment on her consistent cheeriness.

She is a very loyal friend and for the most part, is liked by those around her. She has a very good relationship with both her fellow-students, friends, and many of her teachers such as Mrs. Quick and Mr. Pool. However, because of her magical nature and resulting odd behavior, she is often scrutinized by some, such as Libby and Mr. Kraft. However at the end of the day, Sabrina is a down-to-earth, caring, passionate individual who only wants to do what's right.

Sabrina's story takes place in the fictional town of Westbridge, Massachusetts, where she grew up with her two aunts, Hilda and Zelda Spellman, and the talking cat, Salem Saberhagen. Her father's name was Edward "Ted" Spellman, a warlock, and her mother's name is Diana. Diana is a mortal. Her father has at least four sisters: Vesta, seen only once in the first-season episode "Third Aunt from the Sun" (played by Raquel Welch) but mentioned many times and Hilda and Zelda, both of whom Sabrina lives with, and Sophia, a witch who lived in Rome and looked identical to Sabrina. Sabrina's evil twin Katrina is not considered one of Sabrina's sisters as the evil twin has different parents from the good twin. Her stepmother, also a witch, is named Gail Kippling Spellman. Sabrina was an only child, but had one evil twin (by different parents) and a stepbrother. Sabrina's evil twin's name is Katrina Spellman (also a witch) and her younger stepbrother's name is Donald (a warlock and the son of Sabrina's stepmother). Her grandmother, who is nice to Sabrina but overbearing to her aunts, visited once or twice, as did her great-aunt Irma, the Spellman family matriarch. Though not evil, Irma is domineeringly powerful. Sabrina also has many other relatives such as Cousin Larry, Aunt Beulah, Cousin Zsa Zsa, Aunt Vesta and Cousin Marigold. Marigold's daughter Amanda is known to torment Sabrina throughout the show.

Life in the series

Sabrina was the protagonist of the series. On her sixteenth birthday, she learned that she was a half-witch (through her father's side) and had magical powers. She also learned that her two aunts were witches themselves and that their black cat Salem was a warlock who had been turned into a talking household pet as a punishment for attempting worldwide domination. At Westbridge High, she befriended Jenny Kelly (and later Valerie Birkhead in future seasons) and had an on-again, off-again relationship with Harvey Kinkle. She also had to deal with the snobby and headstrong cheerleader, Libby Chessler, who became Sabrina's rival for school activities as well as Harvey's affections. In later seasons, Sabrina was enrolled at the fictional Adams College in Boston. After getting her degree in journalism she moved back to her aunts' house with Morgan and Roxie. She took a job with the fictitious Scorch Magazine, a music theme magazine for which she interviewed famous artists. Later on, she met a man named Aaron, who also worked in the music industry and the two began dating. Before long, Aaron proposed and in the finale, the two were set to wed when unforeseen events took place. She started to suspect that Aaron was not the one and after Sabrina had tried to connect her soul stone with his, she was sure of it. While it mostly fit, it was not a perfect fit. She tried to ignore it, but followed her heart and canceled the marriage at the altar. When she ran out of the church, she found Harvey waiting for her outside on his motorcycle, holding his soulstone that Amanda, her cousin, had left him. After both Harvey's and Sabrina's soul stones were tossed to the side and fit together perfectly (something they did not see at the time), it proved that those two were destined to be together and they rode off together into the distance in true finale fashion.

For most of the series, Sabrina would regularly cast a spell that landed her in trouble, and she had to turn to her aunts for help. In Season Five, after moving out of her aunts house, Sabrina started thinking she was independent, and whenever something went wrong, she would try to solve the problem herself. However, she could not help but get herself into a situation that was beyond her control (like in the episode Heart of the Matter when she used a dating spell to attract boys, but the spell went wrong when Sabrina's head became misaligned as a result of her head and heart becoming conflicted. She was forced to go to Zelda for help).

During her time at Adams College, as revealed in the episode "The Whole Ball of Wax," Sabrina was finally able to meet her mother. However, it is revealed that the Witches' Council set a decree that if the two were ever to meet face to face, her mother would turn into a ball of wax. While the decree was never repealed, Sabrina accidentally frees her mother by crying into the ball of wax. However, they could not ever see each other face to face again, the one exception being the series finale in which she was able to look at her mother without her turning into a ball of wax (Hilda had volunteered Zelda to be turned into wax until the wedding ended).

In the TV movie Sabrina Goes to Rome, Sabrina, accompanied by Salem, travels to Rome, Italy in order to discover the secret of a mysterious antique locket and save her Aunt Sophia. While there, she befriends Gwen, an inexperienced British witch, who helps her to solve the mystery of the locket. The sequel, Sabrina, Down Under, depicts Sabrina and Gwen going on vacation in Australia's Great Barrier Reef and end up trying to save a hidden colony of merpeople from water pollution and a scheming marine biologist.

Throughout the series, it is shown that Sabrina had many love interests. Her most prominent one is her first boyfriend, Harvey Kinkle. In Seasons 1-4 she meets and dates Harvey Kinkle, who becomes her first true love which is proven when Harvey is turned into a frog by her kiss, she takes the test of true love and passess it proving she truly loves him. Though in the early seasons, they break up but usually make up in the end. However, in an episode of Boy Meets World, The Witches of Penbrook she is seen at the end of the episode on a date with one of the main characters-Eric Matthews. When she was dating Dashiell, another half-witch, she had to choose between both Dashiell and Harvey and, with the help of a spell, she is able to choose Harvey.

In Season 4, she is drawn to Josh who is her manager at the coffee house where she works. She kisses him and Harvey witnesses it causing them to break up though they get back together in "Love Means Having to Say You're Sorry". They officially end their relationship in "The End of An Era" but Harvey still appears in the show.

Mid-season 5 meets Kevin, a student from Adams whom she constantly seems to bump into but is officially introduced through her roommate Morgan. Kevin is a guitar player and apparently got inspiration from Sabrina to write songs, even calling her his muse. They only seem to date for 1 month and ends as Sabrina and Kevin don't seem to find time to define their relationship.

In season 6, she starts dating Josh who at first dated Morgan, her roommate. Meanwhile, in the season 6 finale, Sabrina gives up her true love to save her Aunt Hilda and it happens when during her aunt's wedding she falls to pieces when Harvey tells her he still has feelings for her but she does not return them making him leave for California, Josh says he is taking the photography job he was offered in Prague, and a cute waiter named Luke says goodbye but she is saved when her Aunt Zelda gives up her adult years to save her.

In the 7th season, she meets and starts dating Aaron whom she met at the Scorch magazine office. They become engaged but Sabrina's aunt Irma turns him into a goldfish but Aaron is turned back when Harvey (who is in love with Sabrina) uses Sabrina's magic because he wants to make Sabrina happy. In the series finale, Sabrina prepares for her wedding but stops it when she realizes Aaron is not her soulmate and she runs off with Harvey, her soulmate and first true love (they are soulmates because when their soul stones drop to the ground they fit perfectly) at 12:36, the time they first met 7 years ago. 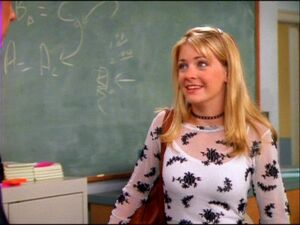 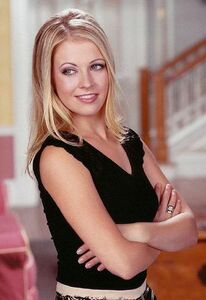 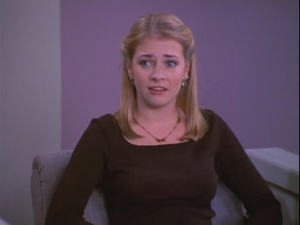 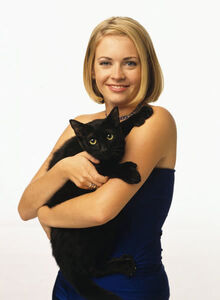 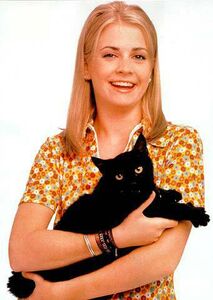 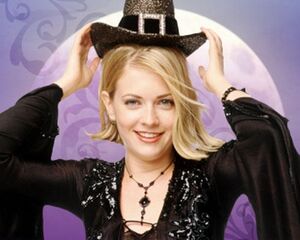 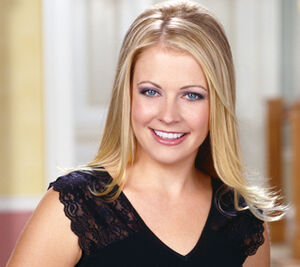 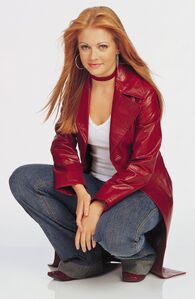 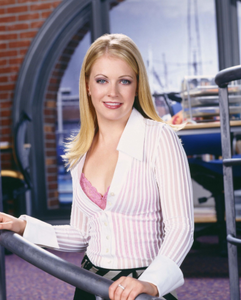 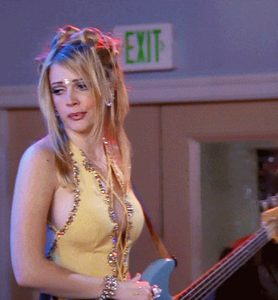 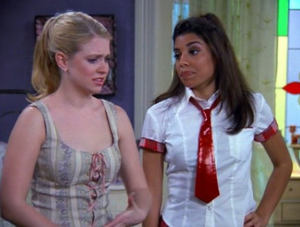 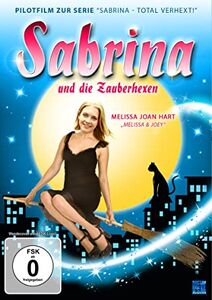 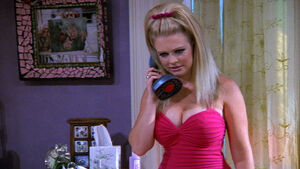 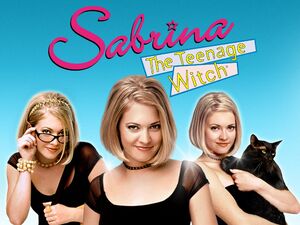 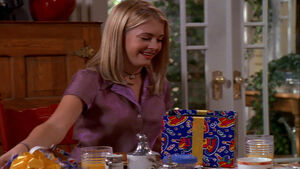 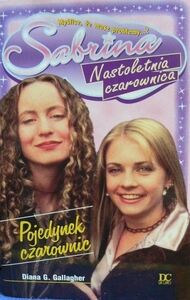 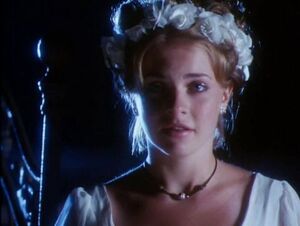 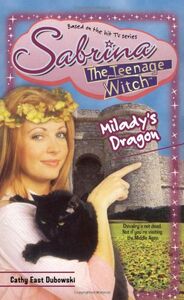