Hero of Craftworld
Knitted Knight of the Imagisphere

To protect Craftworld and Bunkum from anything that would harm it

A Sackperson, often refered to as Sackboy due to his generic appearance being of a boy, is the main protagonist of the LittleBigPlanet franchise along with being the mascot of the PlayStation, or more specifically, the PlayStation 3. He also appears in the crossover fighting game, PlayStation All-Stars Battle Royale as a playable character.

One of his most shining traits is his bravery and willingness to help others. This trait has been prelevant ever since LittleBigPlanet 1, where he was willing to go out of his way to help many inhabitants with their problems and even rescued them from the Collector despite the risks posed. Though he is shown to be paranoid in a few cutscenes, most notably in LittleBigPlanet PS Vita, he is still willing to face his fears for the sake of others, which can lead to him doing some truly heroic actions. In Sackboy: A Big Adventure, he showed complete bravery and no fear, driven by his goal of saving his own kind from Vex and even rejected his offer of joining forces with him.

He has also shown to be quite forgiving. While he does kill enemies during his many journeys, it always when the enemies pose a threat towards Sackboy's life along with others. Whenever a villain redeems themselves, Sackboy always forgives them and makes no action or punishment towards them, even when he has every right to be mad at them. This is especially shown with the Collector, as he made a conscious effort in his acts of villainy up until his redemption; and the Hoard, whose acts of villainy inadvertently created a monster that threatened Craftworld, making even Sackboy initially angry at them until seeing their cheerfulness at the defeat of the monster.

He is also very playful, though is most likely not a child, based on the existence of his race being confirmed in Sackboy: A Big Adventure. His playful nature is even prevalent in LittleBigPlanet 1, as shown through the tutorials. He is happy-go-lucky and very adventurous, often indulging himself in exploring Craftworld, and even Carnivalla in LittleBigPlanet PS Vita. His nature can explain much of his innocence and his willingness to forgive others.

He has also been targeted by manipulation. Often times, he is seemingly forced to do some his heroism alone with minimal aid, especially in LittleBigPlanet 2, despite not having the reputation of being a hero way back when; though this doesn't seem to bother Sackboy. This became a major plot point at the beginning of LittleBigPlanet 3 when Newton deliberately had Sackboy go through Stitchem Manor alone despite his paranoia. This would result in Nana Pud getting distracted by Sackboy which Newton utilizes to unleash the Titans from the tea tin. Sackboy was also manipulated into collecting the Dreamer Orbs by Vex so he could steal them and use them to power the Topsy Turver, much to his despair.

In his generic appearance, Sackboy is made out of a brown knitted wool. He has visible stitches on his head, arms, and legs. He has buttons for his eyes, and his head lacks ears and a nose along with his legs lacking feet. He has a zipper attached coming down his torso in similar manner to a jacket. He wears no clothing, though players are welcome to customize what clothes he wears. They can also change the material Sackboy is made out of along with the type of eyes he has.

With the exception of Sackboy: A Big Adventure, Sackboy has the ability to bring up the Popit. He can use at any time, with the exception of cutscenes along with in-races in LittleBigPlanet Karting . In play mode, Sackboy can only use the Popit for customizing his appearance, placing stickers, chatting, and reverting back to a previously activated checkpoint. However, in create mode, Sackboy has the ability to create whatever he wants and can publish his creations to the world. The scope of what he can create increases every incoming game.

Sackboy has the ability to jump over various obstacles and can grab certain materials; which he can use to swing. Sackboy can also use various tools, including the Jetpack or the Grabinattor, to aid him on his journeys, with the arsenal of what he can use increasing each mainline game. Sackboy can also kill enemies, often through deactivation by hitting their unprotected brain, though sometimes their are other methods. Most notably, in Sackboy: A Big Adventure, which doesn't have unprotected brains, Sackboy can kill enemies through hitting, kicking, throwing, etc. 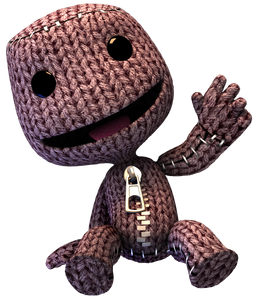 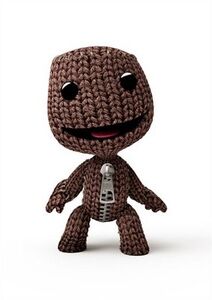