Protect his friends, Rule the world with MgRonald's.

Sadao Maō, originally known as Overlord Satan Jacob on Enta Isla, is a demon lord who ends up in Tokyo, Japan on Earth. He tries to make a living while trying to find a way back to Enta Isla. While his role was usually that of a villain during his time in Ente Isla, he has steadily progressed into heroism since living on Earth. This is shown in such acts like saving people from being killed by an earthquake, protecting the city from either demons or renegade angels, as well as trying to save Chiho and Emi.

He is voiced by Josh Grelle also voiced Byakuya Togami, Akihisa Yoshii and Armin Arlert in the English version.

The details of Sadao Maou's past are somewhat scare. Apart from the fact that he ruled over the land of Ente Isla with four of his war generals, Adramelech , Lucifer , Alsiel and Malacoda . And that he was eventually forced to retreat to Earth due to the inteference of Emilia and the resisting human armies. It is revealed in the light novels that he once was a lowly foot soldier in the Demon armies until he was rescued by Emi Yusa's Angel mother; who preceded to train him in politics and strategy unaware of the consequences of her actions, specifically giving rise to the current demon lord. He is also used as a scapegoat in an conspiracy devised by the Church by sending the Hero Emilia to assassinate him under the false pretext that he ordered his army to destroy the village where both she and her father lived, leading to her father's dead (when in actuality, her father went into hiding to keep one of the sacred swords, which Emi also possesses, out of the Church's hands).

Maou, being the Demon Lord of Ente Isla, has shown immense cruelty through his slaughter of many innocent humans, although later on, he does admit that he didn't quite understand what they were at that time.

In the human world, Maou is shown to be very caring and responsible, especially to his co-worker Chiho and even to the Hero, Emilia. He is also surprisingly casual and forgiving, as shown when he puts others first before himself. It is possible that this is his true personality, simply brought out by his change in environment.

He appears to be dense about matters regarding women. However, this may be due to the fact that he has only lived on Earth for a short amount of time so far.

His initial appearance was a very tall, dark haired demon lord with a cape to match his position. He seems to have had long, unkempt nails and hair.

Upon his transition to Earth, he lost most of his demonic traits. His eyes are a warm red-orange, and his hair retains its color.

When he had regained magic, he gained a very physically capable body and longer nails instead of his orginal back in Ente Isla. He also has horns on his head, with one that seems to have been broken by Emilia, shown in the beginning of the first episode. In the manga, when he regained his powers in the mall after the earthquake incident, his feet were beastlike and his body is not as muscular therefore not tearing up his shirt. However his appearance during this scene is slightly different in the anime, He is more muscular and has goatlike feet instead.

A loyal general who followed him to Earth. They now live together in an apartment. Maou gets embarrassed by Ashiya's open praising of him and is annoyed at his constant lecturing. However, the two share a somewhat brotherly bond with each other as they rely on each other constantly in the human world.

Back in Ente Isla, they were mortal enemies. She was also the one who cut off one of his horns. When Satan escaped through a gateway, she followed him. On Earth they are still a bit antagonistic to each other but not as much as when they were still in Ente Isla. This causes several amusing instances where Emi talks about how she will kill him one day, but not at present because she needs her power to be able to return to Ente Isla (But not without defeating Maou first).

Maou was surprised at first about her initial appearance. However, he is now relaxed even when she is around, as though they never tried to kill each other. His actions are dense with how she feels sometimes,  as Emilia has yelled at him for reasons beyond his comprehension.

There is also the possibility of Emilia having deeper emotions regarding Maou. This is supported by Episode 5, where Maou was shot in the heart and fell, appearing dead, with the shock on her face and asking him to wake up. She also defended his character in Episode 12 when Sariel insulted him, stating that he has become a compassionate, moralistic person during his time on Earth and that he was someone who protected those who can't protect themselves. She also blushes at times when he is around.Emilia hates Maou due to the loss of her father, she views Maou as a despicable and mentally deranged person. As such, seeing his kindness shocked her extremely.

A fellow part-time co-worker at MgRonald's. The two are on extremely good terms

Sadao is a very friendly and helpful co-worker towards Chiho, which extremely baffles and surprises Emilia.

Chiho has a very obvious crush on Maou. She also seems to view him as reliable and a very kind person.

His landlady, who insists on having Maou refer to her as Miki-T. The significance behind her name is unknown. She intimidates him, so to speak. She seem's to know what is happening between Ente Isla and that she knows about them.

His boss at MgRonald's. The two have the usual boss-and-worker relationship, though they are also seen to be very friendly with each other.

Lucifer is a fallen angel and one of the Devil King's generals. After the Devil King was transported to human world, he and Olba became allies in order to defeat the Devil King so he can return to heaven. After being defeated by the Devil King however, he moves in at the same place as Sadao and Shirō.

As the demon overlord in Enta Isla, he possessed great demonic power, and this has been shown throughout the series though as he arrived at Earth, his power there is limited and can only be replenished via fear.

Demonic energy and magic is extremely strong, and most likely has a colour unique to it's user. For Sadao, that color is black. Demonic energy is consumed by using the abilties listed below. However, replenishment of such energy requires feeding off of negative emotions given off by other sentient beings. Fear, despair and pain, and other negative emotions are the driving forces behind the replenishment.

On Earth, due to lack of magic, his powers are weak, so that he is like an average human. However. his powers were temporarily restored during the battle with Lucifer due to the fear that was accumulated from the general public.

Sadao is surprisingly intelligent, witty and crafty. He is able to piece events together and form a logical conclusion with relative ease while everyone else is merely astounded and not even trying.

When transformed he gains enhanced strength to be able to lift falling derbis times twice his size. It has not been shown in the series yet on how powerful he is.

During the battle against Lucifer, Sadao was able to increase his speed so much that Lucifer wasn't able to react to it.

Despite his small human body, being blasted by Lucifer's magic and shot by Olba's gun he was able to move on and survive. 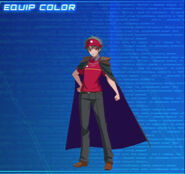 Retrieved from "https://hero.fandom.com/wiki/Sadao_Ma%C5%8D?oldid=1695758"
Community content is available under CC-BY-SA unless otherwise noted.