Avenge her husband death by killing the O'Driscolls

Sadie Adler is character from the video game Red Dead Redemption 2, she becomes a central member of the Van Der Linde Gang after being rescued by Dutch, Arthur, and Micah.

She is voiced by Alex McKenna.

Sadie was originally a married woman, whom worked at a small homestead alongside her husband Jake Adler. unfortunately the O'Driscoll Boys raided their hom and killed Jake, while Sadie hid herself to avoid the same fate.

In the First Chapter Colter: Sadie Adler was encountered by the Van Der Linde Gang, after the latter's killed off the O'Driscolls. Wary of these strangers (particularily Micah Bell), she soon calms down shortly before escaping her burning house, having nowhere to go, Dutch affirms her that she could stay with them and introduces her to the gang where he has Tilly and Karen comfort her.

Sadie spends the Second chapter: Horshoe Overlook: mourning the death of her husband where, she is either seen sitting by herself or being consoled by Abigail and several other members of the gang. She also reluctantly helps Pearson with the cooking.

In the Third chapter Clemens Point: Arthur catches Sadie in an argument with Pearson, due to her being unhappy with chopping vegetables all day (being more accustomed to sharing the work, like she did with her husband). Arthur defuses the situation by letting her accompany him into Rhodes to re-stock on supplies, at this time Sadie buys some a new outfit in addition to shopping.

After leaving the town of Rhodes, the Lemoyne Raider, approaches the two about "paying a toll", the situation turns ugly as Sadie shoots at one of them, sparking a shootout. After successfully driving them off, she and Arthur return to camp, where they unload the supplies and Sadie thanks him. Sadie will remains at camp doing several chores, until Agent Milton and Agent Ross shows up, forcing the gang to relocate.

In the Fourth Chapter Saint Denis: Shortly before the O'Driscoll assault, Sadie asks Dutch to take her robbing with them and speaking to Arthur about her departure from society. Despite Arthur telling her to get inside with the rest of the women and non-fighters, Sadie does the complete opposite and stays outside to kill off several O'Driscoll members alone, forcing Arthur to run outside find and help fend them off.

In the Fifth Chapter Guarma: With the main members of the gang missing, Sadie and Charles takes the non-combatant members of the Van Der Linde gang to an abandoned town of Lakay, in case the Pinkertons search for them at Shady Belle. She secretly leaves behind a letter under the name "Caroline" as a clue for Arthur (or whomoever else) to locate the them. As the core gang members reunites with everything else, they are confronted by Agent Milton and the Pinketons. After fighting off their asault, Sadie agrees to help Abigail rescue John and asks for Arthur to meet her in Sain Denis.

In the Sixth Chapter Beaver Hollow: Arthur meets Sadie at Saint Denis where they discuss their plan to rescue John Marston. Before doing anything, they would have to confirm that John is still in Sisika. Sadie arranges for a hot air balloon and the pilot Arturo Bullard for Arthur to scout the prison yard. After Arthur finds John still there, he finds Sadie being attacked by the O'Driscoll's near Annesburg, she and Arthur fought them off at the cost of Bullard's life.

Sometime later, Sadie and Arthur infiltrated by canoe and make their way to the watchtower, where Arthur stealth kills the guard and sniper the other two at the yard, whom he thinks are with John. They go to investigate,but they find out that John isn't outside and Sadie is held at gunpoint by one of the guard, whom in turn is gunpointed by Arthur. Sadie and Arthur hold Miliken for ransom in exchange for John's release, the trio fight off the guards and make their way off the island.

Later the gang find out that Colm O'Driscoll has been been arrested and is scheduled to be hanged in Saint Denis. Sadie, Dutch, and Arthur go to Saint Denis to ensure that his sentence be carried out, knowing that Colm has escaped his fate the previous two times. Dutch, Sadie, and Arthur were successful in their attempt to see Colm be hanged, although Sadie opens fire on the O'Driscoll member (due to her grudge), leading to a shootout.

Afterwards Sadie asks Arthur to help her eliminate the rest of the O'Driscoll, to mean Jake Adler's death. Arthur can choose whether or not to help: If Arthur decides to assist her, he will tell her that in turn, she will ensure the Marston family's safety "when the time comes". At the Hanging Dog Ranch, Sadie will tell Arthur that if he happens to stumble upon "the fat man with a beard", he should let Sadie handle him before the assualt (him being directly responsible for her late husband). After slaying all but the last of them, Sadie brutally murders the last living member responsible for Jake's death. Sadie thanks Arthur for assisting and reminisce her life with Jake Adler.

Sadie would participate at the battle against the Army at the Cornwall refinery. In the aftermath, Sadie offers to help bring the mortally wounded Eagle Flies back to his father, but Arthur declines her help. She later partakes in the gan's final robbery in Saint Denis, of the train carrying the US Army Payroll. Sadie works with Cleet to fend off the US Army soldiers.

As the gang make their way back to the camp, Tilly Jackson with Jack approaches them, where she announces that Agent Milton has captured Abigail. While Dutch, Micah, and the others ignore the situation and continue riding back to camp, Sadie and Arthur decide to immediately head over to Van Horn to rescue her. Upon reaching the area, Sadie (with Arhur as her sniper backing her up) engages the Pinkertons until she is captured by Agent Milton, forcing Arthur to go in and rescue them. After Arthur bursts into the buiding and finds that Sadie and Abigail all tied up, Milton sneaks behind Arthur and holds him at gunpoint, to where the Pinkerton Agent admits that Micah Bell has been the mole this entire time (not Molly O'Shea). After a brief struggle, Abigail breaks free and shoots Milton in the head using Sadie's revolver. Arthur frees Sadie and the three make their escape and from the group of oncoming Pinkertons. After gaining some distance between, Sadie is last seen being told by Arthur to take Abigail to meet Tilly and Jack in Copperhead Landing, exchanging a sorrowful goodbye before parting ways. 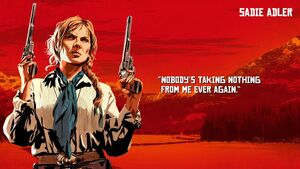 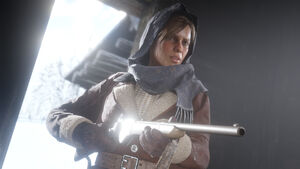 Sadie in Red Dead Online.
Add a photo to this gallery

Retrieved from "https://hero.fandom.com/wiki/Sadie_Adler?oldid=1849777"
Community content is available under CC-BY-SA unless otherwise noted.