Sadie Miller is a supporting character in Steven Universe. She's supportive of Steven's adventures, if only to make Lars angry.

She was voiced by Kate Micucci, who also voices Luhley in the 2012 sequel of Ben 10: Omniverse, Webby Vanderquack in the 2017 reboot of DuckTales and Dr. Fox from Unikitty!.

Sadie is short and heavyset with has fair skin and blonde hair styled in a ponytail with a black clip. She has a faint scar below her right eye.

She wears a pink headband, white shirt, black pants with a blue shirt tied around her waist, and teal sneakers. She also has a gray watch on her left arm.

Sadie is a clerk at the Big Donut and the co-worker of Lars. She is friends with Steven and enjoys his comebacks. Although she is friends with Lars, she does not tolerate of the latter's mockery towards Steven. She is sweet, friendly, reserved, mature and kind spirited, which can sometimes leave her at a disadvantage. She also values her job greatly and strives to be as professional as she can be.

It is also revealed in "Band Night" that she does not feel entirely comfortable with her mother around, due to her overbearing support over everything she does. 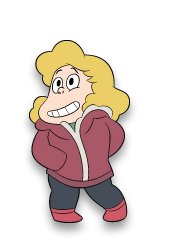 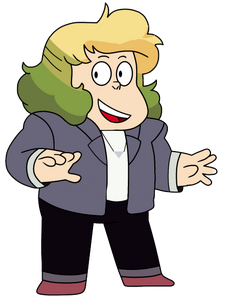 Sadie being kissed by Lars