Sadira is a character from Disney's Aladdin. She is introduced as antagonist, but later becomes friends with Aladdin and the others.

She is voiced by Kellie Martin, who also voiced Roxanne in A Goofy Movie, Daphne Blake in A Pup Named Scooby-Doo!, and Mona in Mickey's Twice Upon a Christmas.

When Sadira was first introduced, she was portrayed as a jealous, determined girl who was trying to get Aladdin for herself by any means necessary, though she was shown not wanting to physically harm anyone, such as when she told the Sand Monster when he captured Jasmine that she just wanted her out of the way. Towards the end of the series, Sadira became more friendly and kinder to Aladdin and his friends, accepting their offer of friendship and becoming extremely loyal.

Strike Up the Sand

Originally just another street rat - much like Aladdin himself had been - Sadira developed an obsession with Aladdin after he saved her from Razoul, but was sad to find out that Aladdin already had someone and worst of all a Princess.

Later, Sadira accidentally found a hidden palace and became a sorceress of the ancient secrets of the sand. She decides to make her first attempt to get Aladdin for herself. From an ancient scroll and a mystical amulet, she calls call up a Sand beast and ordered him to bring Jasmine to her, so she was out of the way which brought Aladdin and the others to come and save her. But the Sand beast was disappointed at not being able to cause destruction and turned against Sadira, swallowing the amulet and attempting to crush them all. With Aladdin, Abu, Iago, Jasmine and Genie's help, they managed to recover the amulet and destroyed it and the Sand beast forever. Aladdin tells Sadira that he likes her, but Jasmine is the one he truly loves. However after they left, Sadira had found another way to get Aladdin to love her and was willing to put it into action.

Her second attempt featured Sadira using an unidentified 'memory sand' that caused the entire city's memories - and apparently even history itself - to be altered, resulting in Sadira being the princess and engaged to Aladdin while Jasmine was a street rat, with she and Aladdin never having even met. However, she didn't realize that she had to include the animals of the city into the spell, these notably being Abu, Iago and Rajah, who kept their memories and swiftly escaped the palace to search for Jasmine. Despite her initial skepticism, Jasmine began to believe Iago's story when she saw the wedding parade, feeling drawn to Aladdin despite having no memory of him. Upon Jasmine entering the palace, the power of love was further proven to be stronger than the memory sand, as even the Sultan felt drawn in some way towards Jasmine, mentioning kindly that though he had only one daughter, if he had another, "I would want her to be as pretty as you." Sadira attempted to stop Aladdin and Jasmine meeting by having Iago, Abu, Rajah and Jasmine imprisoned after she accused Jasmine of being a witch and having the wedding moved to that very night, but the animals and Jasmine managed to interrupt the wedding before Sadira and Aladdin kiss. Realizing that he felt more attracted to Jasmine than he ever had with Sadira, even though he could not remember her, Aladdin kissed Jasmine, which reversed the spell.

In Sadira's third attempt, she cast a spell to transform Aladdin into a heroic dragon-slaying prince and Abu into a horse, simultaneously opening a portal to the land of her fantasies, where she and Aladdin could live without any interference from Jasmine. Although Genie managed to close the portal, the subsequent mixture of Genie's magic with Sadira's spells meant that Aladdin still believed himself to be the prince despite the lack of any armor or even a dragon to slay, as well as Abu becoming a mule, forcing them to recreate Sadira's fantasy in order to break the spell. In the process, however, Sadira and Jasmine actually bonded to a certain degree, developing an appreciation for their skills and putting their old rivalry to rest as they worked together to vanquish the out-of-control mechanical dragon Genie had created while Aladdin was under the spell's influence. There was a time in that episode, Aladdin and Sadira kiss several times.

Witch Way Did She Go?

Despite her new friendship with the group, Sadira was forced to face the remnants of her past actions when, while attempting to make a soup for her friends, she accidentally mixed half of the soup recipe with half of a sand witch spell. When she threw out the inedible mixture onto sand, she unknowingly releasing the Sand Witches who had taught her in the first place. Jasmine is the only member of the group who believes Sadira was innocent. Having framed Sadira for releasing a sand viper on the city, the Sand Witches attempt to win her over to their side and thus raise the ancient City of Sand to destroy Agrabah, but in the end Sadira chooses her new friendship with the group and helps them to defeat the Witches.

Sadira makes a small cameo at the end of the final chapter as a guest at Aladdin and Jasmine's wedding. 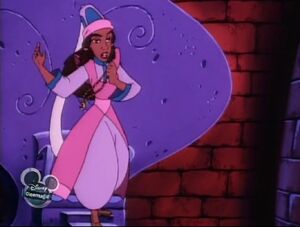 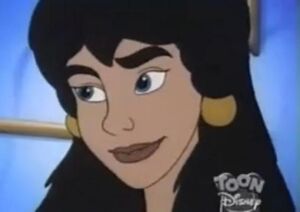 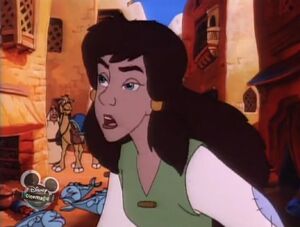 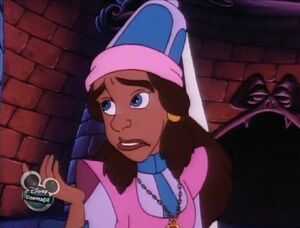 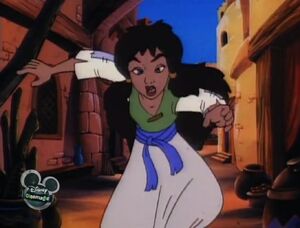 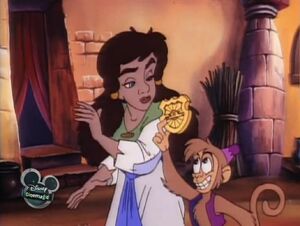 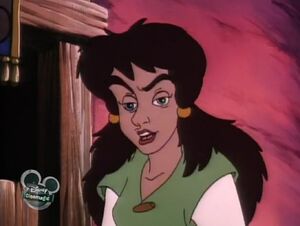 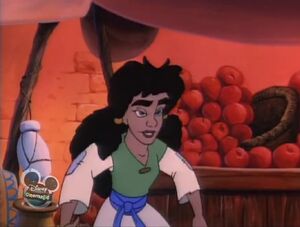 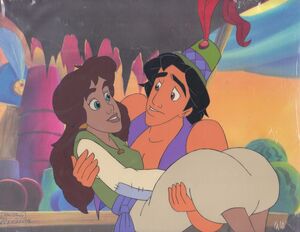 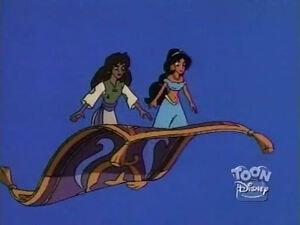 Retrieved from "https://hero.fandom.com/wiki/Sadira?oldid=2265368"
Community content is available under CC-BY-SA unless otherwise noted.