To find her place in Riley's mind (succeeded)
To signal others when Riley needs help, comfort and support
To help Riley feel true happiness and joy

Sadness is the deuteragonist of the Pixar film, Inside Out. She is one of the five emotions inside the mind of Riley Andersen. She is voiced by Phyllis Smith. Hence her name, she is always sad, pessimistic and miserable.

While trying to find the important orbs for the internal memory core, Sadness and Joy were distracted by an imaginary friend named Bing Bong. He guides Sadness and Joy across Imagination Land and they try to return to the headquarters by taking the Train of Thought, but are unable to reach it when Riley's Honestly Island begins collapsing and derails the train.

When Joy finds a tube that returns to the headquarters, she disowns Sadness and tells her that Riley doesn't need her; the plan however backfires when the tube is fractured, causing her and Bing Bong to fall into the Memory Dump. After Joy feels empathy for Sadness, the two manage to finally make it to the headquarters when Riley is leaving San Francisco, an idea hatched by Anger. Sadness was able to save Riley by placing the memory orbs back into the internal core, and instructing her to return to her parents, causing her to reveal her personal thoughts about her new home and how she misses her old one, which her parents share as well. This ultimately negates the ordeal that Anger caused. By the end of the film, Sadness and Joy reconciliate and the emotions begin to help Riley adapt to a new life. 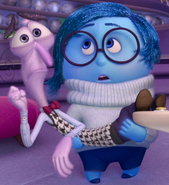 Retrieved from "https://hero.fandom.com/wiki/Sadness?oldid=1466066"
Community content is available under CC-BY-SA unless otherwise noted.