Lady of the House

Give birth to her and Ou Hon's child safely.
Await her husband's return from the battlefield. (All succeeded)

Sai Ka is a minor character in the popular historical seinen anime and manga series, Kingdom. She is the wife of Ou Hon, the mother of their first child, and the daughter-in-law of Ou Sen, a Great General of the state of Qin and Third Great of the Six Great Generals.

Sai Ka is a beautiful woman with long black hair that appears to be a in her 20s. She is usually shown wearing extravagant clothing and robes commonly worn by nobility.

Sai Ka appears to be a flexible, cheerful and outright kind woman in contrast to her husband's afloat demeanor and stuck up attitude.

Sai Ka is introduced in v61's omake of the series as Ou Hon's fiancée (Much to the outrage of his admirers). Sai Ka would later be reintroduced as his wife in the main story after marrying him in the aftermath of the Western Zhao Invasion Arc and his promotion to the rank of General.

Two years after the Battle at Shukai Plains, Sai Ka is mentioned by Mou Ten as he told Shin, Ten, and Kyou Kai about her and Ou Hon's marriage which sent the Hi Shin's General into an unforgettable expression of utter shock and was later reveled to have become a mother after safely giving birth to their first child. 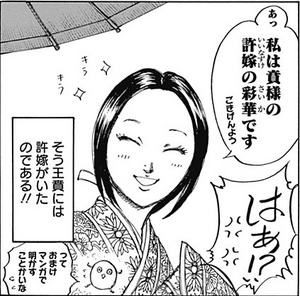 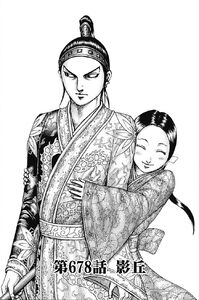