Saint Walker (real name Bro'Dee Walker) is a fictional character and superhero from DC comics, and is one of the supporting characters of the Green Lantern series.

He was a inhabitant of a planet ravaged by the Red Lantern Corps. He traveled to Mogo—who had promised Walker that if he sought him out, he'd retrieve him from his "blackest night"—and became a hermit, wandering the planet in search for the "saviour". Saint Walker traveled to the mountain tops of Mogo, where he was unveiled that the saviour was himself. He was bestowed with a Blue Lantern Power Ring and battery to accommodate his position as the first Blue Lantern, and would sometimes act as the corps' leader. After he had completed his journey, Saint Walker joined the Green Lantern Corps's pursuit in repressing the Red Lantern Corps, and became an ally of the corps and the Justice League.

He was created by Geoff Johns and Ethan Van Sciver, and first appeared in Green Lantern Vol 4 #25 in January of 2008.

The living saint of the Blue Lantern Corps, Walker of planet Astonia was the very first member inducted into the Corps by Ganthet and Sayd. His planet doomed by its dying sun, Walker and his family set out on a pilgrimage to a mountain summit where, it was prophesied, a messiah would appear. Due to a series of tragic accidents, all of Walker's family died, and when he finally reached the summit, Walker called out in anger that no Messiah was to be found. It was then that he looked into a reflective stone on the mountain summit and realized that he was the messiah. He returned to his distraught people and preached to them until they became peaceful in their final moments before a Blue Lantern Ring found him. Restoring his dying sun and saving his world, Saint Walker traveled to Odym to serve the Blue Lantern Corps.

Bro'Dee walker was born on the planet Astonia of Sector 1, and was a religious man whom later married a woman named Quanta, and they had two children together, Jat and Peesh. When their planet was at peril by their sun becoming unstable, Bro'Dee decided to go on a journey to find a messiah. His entire family perished during the journey, and when reaching to the mountain, found no messiah and became enraged. However, it started to rain after a bolt of lighting, and Bro'Dee realized that he was messiah, and returned to his planet. The sun turned blue, and Bro'Dee was gifted a blue ring, and was inducted into the Blue Lantern Corps by the Guardians of HOpe, Ganthet and Sayd. Bro'Dee became their first Blue Lantern, being the true embodiment of hope, and Walker then selected Brother Warth to become a Blue Lantern.

As a Blue Lantern, Bro'Dee went by the name "Saint Walker" and assisted the Green Lantern Corps after they were ambushed by the Red Lantern Corps. When a majority of the Green Lanterns became infected by the Red Lantern's flames, Bro'Dee managed to wash over the rage with his hope. Saint Walker then saw Hal Jordan was still infected, and gave him a Blue Lantern ring, which turned Jordan into a Blue-Green Lantern hybrid. When the Black Lantern Corps was attacking the galaxy, Saint Walker was recruited into the New Guardians, which consisted of Jordan, Violet lantern Carol Ferris, and Yellow Lantern Sinestro. His teammates tasked him with stopping the Orange Lantern Larfleeze's hunger so they could recruit him to stop the Black Lanterns.

Seeing that Earth needed a Blue Lantern while the others were arriving, Saint Walker gave The Flash (Barry Allen) a Blue Lantern ring for the meantime. The New Guardians managed to stop Nekron and the Black Lanterns' plot, and Saint Walker assisted Ferris in healing Mera. During the "Brightest Day" storyline, Saint Walker assisted the Justice League in stopping Eclipso, and later helped Hank Henshaw on trying to stop Doomsday. Walker then went to the New Guardians to Ryut to find the Emotional Entities, but were ambushed and captured by Lyssa Dark. Jordan was the only one who managed to escape and take his teammates' rings, and the Blue Lantern ring was passed onto Kyle Rayner. 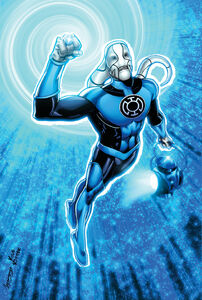 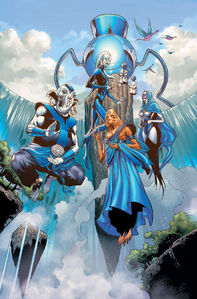 Saint Walker with the Blue Lanterns. 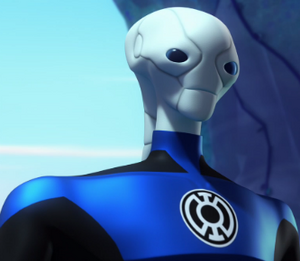