King Of Lion
Lion King
Heir Of The Great King

Desires to become Satan to prove himself even with his lack of special demonic powers.

He was voiced by Yuichi Nakamura in the Japanese version, and by Marcus D. Stimac in the English version.

Sairaorg is a handsome young man with black hair and violet eyes. He is very tall and has a muscular build due to the extreme training he has done

Sairaorg has a noble and calm personality and greatly respects his opponents. He also likes to fight strong people, to the point that Rias Gremory, his own cousin, called him a battle maniac. He is shown to be a kindhearted and compassionate person and has a very straightforward personality. He even shows unconditional kindness to his estranged half brother. Sairaorg is extremely dedicated in fulfilling his dream to create an Underworld where any Devils regardless of their background can make their dream come true as shown in his unbreakable determination in protecting Auros Academy, which is an important stepping stone to his dream, from Grendel's rampage. Gremory_seal-disclaimer.png Sairaorg takes great pride in his strength and the fact that he trained for it, this is shown when he felt insulted by Bedeze Abaddon's offer to give him a King Piece.

Sairoarg appears in Volume 5 as one of the six young Devils chosen for the Young Devils Gathering and stopped Seekvaira Agares and Zephyrdor Glasya-Labolas who were arguing, knocking Zephyrdor out and convincing Seekvaira to stand down. He later faces Zephyrdor in a Rating Game which he and his team overpowered Zephydor's team and won by dominating and crushing Zephydor's will to fight.

He reappears in Volume 6 alongside his Queen, Kuisha Abaddon, after finishing his interview on the television at the Underworld for the Young Devils Gathering, greeting Rias and her peerage who were on their way for the same interview and leaving after telling Rias that he wants to fight them with pure power only.

In Volume 9, he has a sparring match with Issei while his hands and legs are on a heavy seal. Near the end of Volume 9, he is seen talking with Seekvaira who was complaining about Issei's new powers and that the current Satans favor him but Sairaorg, who was pleased by the event, ignored her.

In Volume 10, Sairaorg faces Rias in their Rating Game, during which he eliminated Yuuto Kiba, Xenovia, and Rossweisse in the games, facing Issei in the final round. While initially refusing to use the Balance Breaker of his Longinus, Regulus Nemea, he eventually used it after persuasion from Issei. In his Balance Breaker form, Sairaorg's strength and speed increased greatly to the point where he easily shattered Issei's Scale Mail while in Rook mode. Despite this, he ultimately lost to Issei after the latter manages to achieve his Cardinal Crimson Promotion in their battle, fighting Sairaorg in a fist fight which Sairaorg lost after losing consciousness.

In Volume 12, Sairaorg goes to the Gremory territory to check on Rias and is the one responsible for helping her regain her composure after Issei's "death". He later fought against Heracles and easily defeated him. He and the Gremory Team then welcome Issei who came back from the Dimensional Gap, witnessing Vali Lucifer and Pluto's fight, which Vali won dominantly as Issei and Cao Cao fight one-on-one in a rematch. After Issei defeats Cao Cao, Sairaorg proclaims that he shall be the one to defeat Issei.

In Volume 16, Sairaorg participated in the meeting for the formation of D×D and agreed to join the team to fight against Rizevim Livan Lucifer and Qlippoth.

Sairaorg and his peerage helped in the experience day for the Auros Academy built in the Underworld in Volume 17. When Qlippoth launched their attack, Sairaorg and his peerage first defended the floating island Agreas then helped in the defense of Auros after the appeareance of the legendary Evil Dragons Grendel and Ladon. He and Issei engaged in a fight against Grendel and was able to overwhelm him before Walburga sneakily attacked Sairaorg. Even with the increased defense because of Regulus Nemea's Balance Breaker, Sairaorg was still heavily injured from the attack of the Holy Cross user. Grendel used this chance to beat Sairaorg up but he persevered and with his and Issei's combined effort, they were able to defeat Grendel and have Koneko Toujou seal his soul inside a jewel from Issei's armor.

Devil Physiology : As a pureblood Devil and a child between the house of Bael and Vapula, Sairaorg possesses all common powers to a devil such as demonic power ( albeit very little ), superhuman physical stats ( highest among the devil ), flight, in addition to touki ( a power he awoke through rigorous training ) and lion tameing ( inherited from his mother side ).

Master Martial Artist: Sairaorg is a master hand-to-hand combatant, having practiced martial arts for a long time. He is able to overwhelm and knock down many devils from the Old Satan Faction that consist of middle and higher classes of devils. He also has demonstrated to easily knocking down Heracles in one normal punch using just a small bit of force.

One of the 13 Longinus, Regulus Nemea takes the form of a great battle axe that resides the spirit of a Nemean Lion named Regulus, although the spirit is able to materialize itself taking the form of a huge Lion. While Sairaorg is not the official wielder of the Regulus Nemea, Sairaorg can combine with Regulus to use its Balance Breaker. 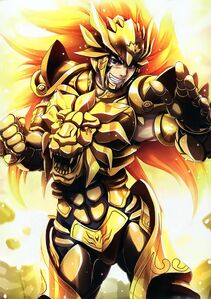 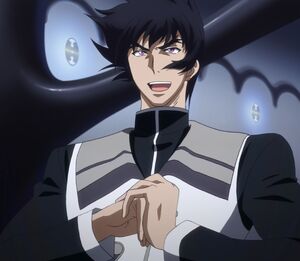 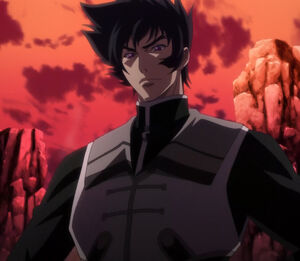 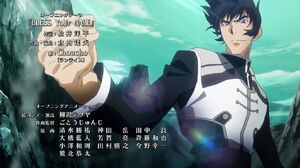 Retrieved from "https://hero.fandom.com/wiki/Sairaorg_Bael?oldid=2241552"
Community content is available under CC-BY-SA unless otherwise noted.