At 37 years old, Sabaki is currently the oldest active Kamen Rider Oni in Japan. He is defeated often, but this can be attributed to his old age. Sabaki was the former mentor of Kamen Rider Banki, who is now independent, and currently, he has no student. He has a supporter named Ishiwari. He is both an active trumpet and taiko user, making him one of the few Oni to be able to handle both weapons full time. Sabaki had the Sabaki Enma made specifically for himself, small taiko-sized versions of the Oni guitar.

He first appears in Weakening Thunder and fights against Yamaarashi's parents. He was tired from overexerting himself in battle. Yamaarashi arrives, beats Sabaki and ropes him by its tail. After that, Todoroki and Zanki arrive and save him from Yamaarashi. Then Ishiwari takes him to the hospital.

After leaving the hospital from making a full recovery, Sabaki goes back to work hunting Makamou. As an active taiko-style Oni, he had to fight the Summer Makamou. He follows and defeats Kappa's parents, After that, Kappa appears and beats him. Ishiwari has to take him to the hospital again. Hibiki takes over for Sabaki and follows the Kappas and defeats them.

Sabaki appears again in Starving Shuki and fights Notsugo. Notsugo escapes from Sabaki. Then, Shuki arrives (in Oni Armor). She tries to beat Sabaki. Todoroki and Zanki arrive and saves him from Shuki.

When Yobuko enters the city, Sabaki is the first Oni fights against it. He is beaten quickly. After that, Todoroki and Ibuki arrive, those two also are beaten by Yobuko like Sabaki.

In this Oni form, Sabaki is a Dark Brown demon. This is Sabaki's basic and only form. To become this form, Sabaki needs to pluck his brace strings and the vibrations from the strings cause his body to be engulfed in a fiery aura. Sabaki also gains a second "oni face" which is a crest that forms on his forehead. Unlike most Kamen Riders, Sabaki does not wear a suit, rather his demon form is his true form. 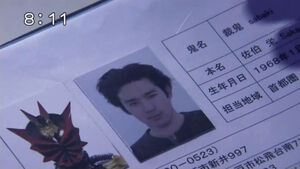 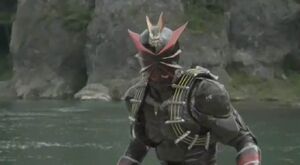 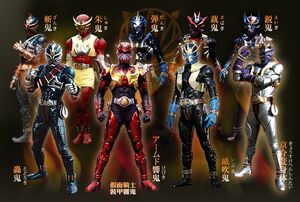 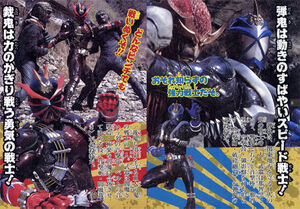 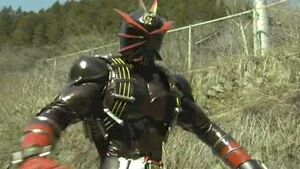 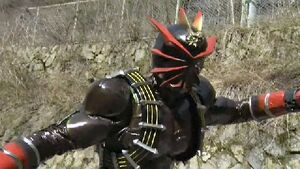 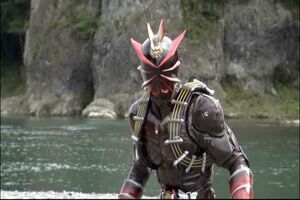 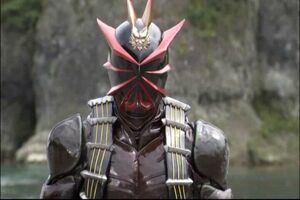 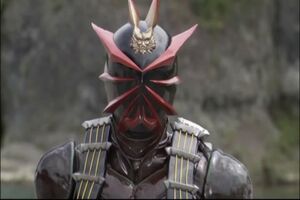