Sin and Punishment: Successor of the Earth

Protector
Saki Amamiya is the male protagonist of Sin & Punishment: Successor of the Earth.

Following an unspecified fatal incident, Saki is revived and given strange powers by the leader of a team called the Savior Group, a mysterious woman named Achi.

The Savior Group attempts to protect Japan from the growing threats of the bestial Ruffians and the ruthless Armed Volunteers. Joined by Saki's love interest and future wife, Airan. Following a purge, Saki, Airan, and Achi are the only survivors, and attempt to reach a transport to leave the city.

Saki transforms into a giant Ruffian after falling into a rising tide of blood during a fight with a telekenetic woman named Kachua. He then battles her and destroys her in Ruffian form but then turns on Airan and Achi. Achi teleports Airan and herself to safety, while Saki marches onward to the Ruffian hive.

Saki is saved from the Armed Volunteers by Airan and Achi and returned back to human form when Airan is physically placed into his body, reminding him of what it means to be human.

Towards the end of the game, Airan is kidnapped by Achi, who reveals that Saki was being groomed as a leader in a much larger conflict involving cosmic powers. Saki defeats Achi and is reunited with Airan. With Japan in ruins, the two wonder about their future.

At some point, he and Airan have a son named Isa. The ultimate fate of Saki and Airan is not touched upon in the sequel.

Saki appears as a assist trophy and a collectible trophy.

Saki returns as a assistr trophy, his trophy can be obtained by clearing All-Star mode in hard difficulty with every characters.

Saki doesn't return as a assist trophy, but as a Mii costume for the Mii Gunner, Saki is also a ace primary attack spirit. His spirit battle is on the battlefied form of the Moray Towers stage against a Mii Gunner on his costume who have increased power on ranged weapons. 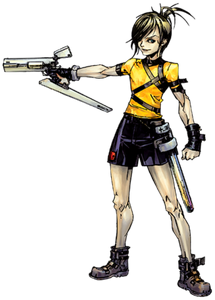 Saki Amamiya in Sin and Punishment: Successor of the Earth 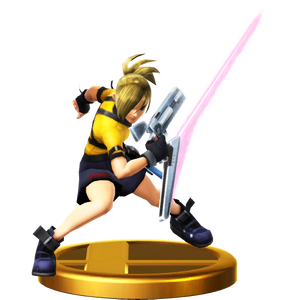 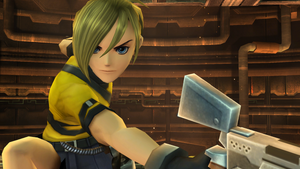