Saki Inugami is a character in the video-game Shadow Hearts: Covenant. She is the mother of main character Kurando and a harmonixer like him and main character Yuri Hyuga. Saki is sought out to help Yuri and his friends fight the evil demon Astaroth.

Saki Inugami is the leader of Inugami village on mount Katsuragi, Japan. Though she inherited the name "Inugami" and subsequent leadership of the village from her late husband Saki herself is of a distinguished bloodline, one of harmonixers. A harmonixer is a human with the ability to forge an new physical form from the spirits of slain demons and monsters, the form of the harmonixer depends on their innate personality traits, the strength and characteristics of the form is based on how much spiritual energy is channeled into from the Malice of slain foes; this process is refereed to simply as Fusion. Saki and her son Kurando acquired their fusions as a rite of passage and rather than killing monsters to trigger the initial transformation seemed to have struck pacts with Shinto gods and goddesses, though the two still channel the Malice of slain foes into their fusions to make them stronger. Saki's fusion is with the goddess of fire Kouenki. Kurando left Inugami a few years prior to the start of the game for training and later honor's sake, Saki continued her responsibilities to the Inugami as it's leader and shrine-maiden. Saki's most prominent duty is as an oracle at the Fountain of Sukune, a cave shrine in Inugami with a pools whose waters were used to divine past, future or events over great distances.

When encountered in-game the party of Yuri Hyuga, Karin Koenig, Blanca, Gepetto and Cornelia, Joachim Valentine, Lucia, Anastasia Romanov and Kurando, are looking for the demon lord Astaroth, who had possessed their old enemy Nicolai Conrad and was planning to destroy Japan. Kurando had lead the party to Inugami to consult his mother since she was botha gifted oracle and had access to the Fountain of Sukune. Though he had lived in China for most of his childhood, Yuri still barely recognized Mt. Katsuragi as his birthplace. Kurando lead the party to the Fountain of Sukune knowing his mother would already be expecting them, sure enough she was. Saki was waiting in the Fountain of Sukune to greet them and prepare the divination. Once Yuri and his friends were ready Saki preformed ceremonial dance that revealed Astaroth's location in the waters of the fountain. As the waters revealed Nicolai and then Astaroth the demon became aware that he was being watched and reached out through the very divination to attack Saki, materializing his claws from the reflections in the pool. Saki was prepared for Astaroth's evil and activated a ward to protect herself, however the demon lord was stronger than she expected and broke through the ward with a concentration of Malice. Through the burst of Malice, Astaroth was able to possess Saki and triggered her fusion, transforming into Kouenki and using her to fight Yuri Kurando and the others.

After Astaroth/Kouenki is beaten the Malice that formed it dissipates and with it Astaroth's hold over Saki. Kurando immediately rushes over to check on her and finds to his relief that Saki was still alive. After recovering Saki invites the party to her house to speak with them and thank them for freeing her. Saki says the mountain they had seen Astaroth hiding in was Mt.Fuji and that the mountain was connected to a major ley-line, the spiritual equivalent of the planet's nervous-system. Saki said if Astaroth truly wished to destroy the world and was as powerful as she had felt he would marshal is power at Fuji and use the ley-lines to funnel his power through, harming most of the planet and destroying Japan. With Astaroth's location and plan revealed to them the party thanked Saki and prepared to face Astaroth. Before they left though Saki stated that Yuri looked very much like his father. When Yuri asked how she knew his father Saki reveals that she knew him because he had lived in Inugami before he joined the military and was shipped to China. Yuri's father "Ben", or rather "Jinpachiro", Hyuga was in-fact Saki's brother, making Saki Yur's aunt and Kurando his cousin. Saki also notes that Yuri had access to many different fusions but states that most harmonixers only ever have one fusion form. Saki says he must have suffered some great trauma that fractured his psyche's and with it his grasp on a single fusion. Though the multiple fusions made Yuri stronger than most harmonixers it also made his spirit more volatile and increased greatly his chance of becoming possessed by his inner demons. Yuri had come to grips with the Malice and risks it presented to him in light of his powers a long time ago, making Saki realize just how strong Yuri's will had to be.

After a deadly battle with Astaroth, one final enemy had arisen. The foe was planning on undoing time. Yuri and the others returned to Saki to find out where he would head to enact his plan. Saki told them he would go to the The Stone Platform in Asuka. Before leaving Saki spoke with Karin at the Fountain of Sakune in private. Saki saw that Karin had feelings for Yuri but had not told him about it. Karin was glad to have someone to open up to about how she felt but knew her affection would never be returned since Yuri was still in-love with his late girlfriend Alice Elliot. Saki said that Jinpchiro and his family were born under a strange star. To help Karin come to terms with her unrequited love Saki decided to share a photo from her brother, a family photo of Jinpachiro, his wife Anne and Yuri when he was still very young. Upon seeing the photo of the happy family Karin understood what Saki meant.

Saki can also be contacted again about trouble in the Lion Shrine an ancient shrine east of the village, the shrine was being targeted by the ghost of an evil oracle name Garan, whom the team had slain before reaching Inugami. After cleansing the shrine Saki sees Kurando has completed his rite of passage and offers to unlock the power of a second fusion for him, Jutendouji, the god of hellfire, before the fight Saki warns Kurando that as part of the sacred rite to release it she had to fight Kurando but she was honor bound not to hold back, and if he could not beat her she would be required to kill him Kurando, being Inugami as well understood the seriousness of his mother's duty and accept the challenge, Saki take on the form of Kouenki and Kurando takes on the form of Jutendouji and the two fight. Though Saki's is bound not to spare Kurando, we was not under the same obligation and beats his mother without finishing her off. After Kurando unlocks Jutendouji Anastasia can go see Saki in her room and the two get to discussing the his new status as a man, Saki makes several vague references to kurando being a man and "was swinging that big, hard thing around so roughly!" and halfway into the conversation realizes what her comments must sound like, fortunately Anastasia is still too young to understand the full implications. To ensure Anastasia does not go spreading the word that Saki is some sort of dirty old woman Saki gives Anastasia a kimono she and Kurando's father had made for Kurando as a child in-case Saki gave birth to a girl instead of a boy. Saki was planning to give the kimono to the girl Kurando would marry for their child but was willing to trade it to Anastasia for her silence about her innuendos, Anastasia understood little of what the innuendos were but as she had a crush on Kurando she viewed the gift as an engagement present and accepted them promising that if anyone asked about Saki all she would tell them is that she was a "beautiful and mysterious widow" and not a dirty old woman. 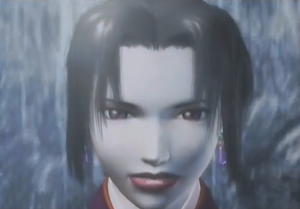 Saki at the Fountain of Sakune 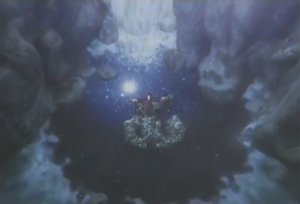 The Fountain of Sakune's divination 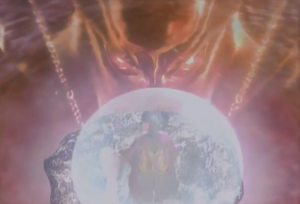 Saki trying to ward off Astaroth 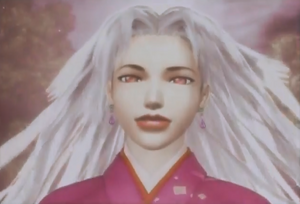 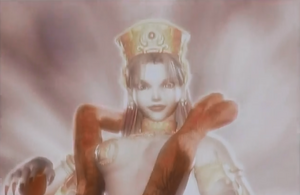 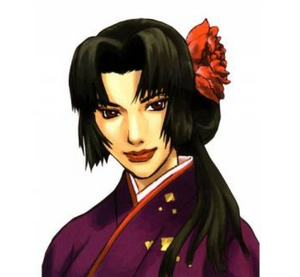 Saki Inugami
Add a photo to this gallery

Retrieved from "https://hero.fandom.com/wiki/Saki_Inugami?oldid=1861279"
Community content is available under CC-BY-SA unless otherwise noted.