Saki Mitonoya is a heroine of Vanguard Princess.

Rueria St. school captain of kendo In the next student council president candidate. Appointed the performance testing and data collection of votive sword "Hitohira" from the military, we ask the game with Yui Kutuna. It is something firmly There is only a student council president candidate, but there is a little feel of natural and pace. She also sprinkled Lilith and one game does not try to believe that it is the devil.

Yui military from the data of votive sword "Sakuya" with developed, blade red Japanese sword. Performance Where such degradation version of Sakuya (to have been referring to the holder of the article about the performance of Sakuya). Unlike Sakuya, functional performance is optimized according to the user is mounted. Although so far seven prototypes were made, some users may appear who cause so-called "runaway" It is hazardous material handling from per Yui and Natalia.

Her last name "palace valley" read "Mitonoya", but by the will see it may be able to read as "Oden Ya". From this it is so that is sometimes Oden cry in the coterie neighborhood. Or In response to this, the setting called "like Oden" is had been reverse imports in official Cels.

According to official blog, the data of all players character is referenced to Saki, When creating a new character is taking a technique called "replaced by copying the data of Saki". This thing from the specification of "not make the body and support in a separate file" of 2D fighting Maker 2nd. This means that first created the character most is Saki so rather than Yui. 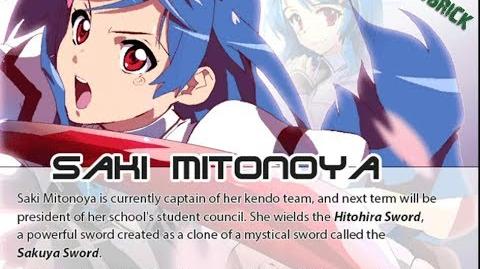 Retrieved from "https://hero.fandom.com/wiki/Saki_Mitonoya?oldid=1561859"
Community content is available under CC-BY-SA unless otherwise noted.