Start a Wiki
Saki Tsuzura is Heart's childhood friend from Britain, who joins Heart in investigating the Drexler Institute. She has painful memories of getting sucked into the Elemental World with her friend, Fiona. While Fiona was unable to return, Saki was saved by her Arcana, Bhanri (Thunder), who resembles a woman trapped in a giant crystal and was once a queen revered as the Goddess of War. Saki is voiced by Yumi Shimura.

She is the daughter of a successful businessman and has been best friends with Heart since childhood. Two years ago, Saki’s father had to relocate to Great Britain for work, and she attended school there. One day, Saki and her friend Fiona visited a mysterious mountainside and were sucked into the Elemental world. Saki was rescued by the Arcana Bhanri, but Fiona was trapped in the other dimension. Saki has felt guilty ever since. Now the sky has started looking exactly as it did two years ago in England, and Saki is determined not to let anyone else get caught in the Elemental world where she keeps this situation as a secret without Heart knowing. After hearing Heart is going after the strange skies in Tokyo, Saki decides to stop Heart where she doesn't want to lose another friend in the Elemental world like Fiona.

Some Maidens are born with their abilities, but for others, like Saki or Lieselotte, their abilities at birth are relatively weak and can lay dormant for years. Sometimes, it takes a truly devastating, life-changing event to awaken the powers deep within them. 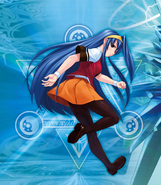 Hello Kitty & Apron of Magic: Rhythm Cooking
Add a photo to this gallery

Retrieved from "https://hero.fandom.com/wiki/Saki_Tsuzura?oldid=1425546"
Community content is available under CC-BY-SA unless otherwise noted.