Aid Demon Slayer Corps in its war against Demons.

Retired
Hero from the Past

Sakonji Urokodaki (鱗滝 左近次) is a supporting protagonist of the popular manga and anime series, Demon Slayer: Kimetsu No Yaiba. He is a former member of the Demon Slayer Corps, as well as the previous Water Hashira. He is also the teacher of Tanjiro Kamado, Giyu Tomioka, Sabito, and Makomo.

Sakonji has been shown with no face it's has been decided or released through a entire complete manga, he always seems wore a red tengu mask with covered into his face along with Tanjiro stand although to Taisho secret with his face is very calm and gentle. He debuted as a elderly to be individual, by noting as a counting numbers in students when he training, with his white hair. As a younger, the hair is black and fashioned onto the topknot.

He wears a white cloud-patterned jinbei kimono with a light blue shirt, dark blue pants fastened on the shins with white kyahan guards. He has a black traditional socks tabi, wears similar sandals to the ones Tanjiro has, with the only difference being that the straps are dark blue. In the occasions while he left, he also wears a white cloth that covered the head and wrapping under the neck.

Sakonji at first appears to be a grumpy and stern old man. However, he's revealed to be an extremely kind and passionate man, who cares deeply for others. During their training, he pushes the students really hard, as when he took Tanjiro under his wing, Urokodaki made the latter's training increasingly difficult and dangerous. The main reason he pushes them so hard is so that they can become as strong as possible. He sees his students as nothing short of family, as shown when he said he didn't want to send Tanjiro to final selection because he didn't want anymore children to die, and also when he burst into tears and hugged Tanjiro after he came back from final selection. He's also one of the few people affiliated with the Demon Slayer Corps to trust Nezuko, and vowed to commit seppuku if she ever killed another human. He also told Tanjiro that he has no doubt he'd be able to restore Nezuko's humanity. 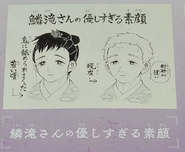 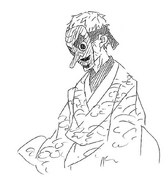