The enemies of Remilia Scarlet

Sakuya Izayoi is a heroine from Touhou who serves Remilia Scarlet as her head maid, and is easily one of the most enigmatic characters, despite appearing in so many games. She is apparently shown to be the only human working at the Scarlet Devil Mansion, and has the power to control time, stopping and resuming it at will. She is known to then place her never-ending supply knives in midair and resume time to allow these knives to fly towards her targets. Stopping time is also a handy way of doing the large amounts of maid work given to her in a short time. Because nearly everyone living or working at the mansion are maids, being the chief of them all means there are few people there with more authority within the mansion than Sakuya. 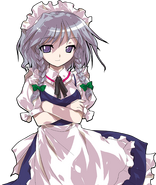 Immaterial and Missing Power
Add a photo to this gallery

Retrieved from "https://hero.fandom.com/wiki/Sakuya_Izayoi?oldid=1908469"
Community content is available under CC-BY-SA unless otherwise noted.