Sal Commander, also known as Commander G'Throkka, is the Salamandrian Commander, superior of Mona Lisa, ally of Turtles and one enemy of Triceraton Empire in the 2012 version of Teenage Mutant Ninja Turtles. He and Mona Lisa met with Turtles, April O'Neil, Casey Jones and Fugitoid in icy moon, initially they were going to destroy them, because they came across their ship on their own ship and dropped it to the moon. But later they began to work together to be saved, and then they they became each other good allies. Raphael is enamored Sal's lieutenant, and Sal is one those who do not understand the love.

He is voiced by the famous Keith David, who also voiced Goliath, and Spawn 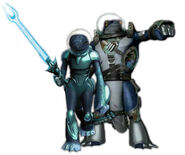